The films opening is a announcement about the controversy the film has created due to its misrepresentation on the connection between mongloidism and a link to psychotic behavior. The film makes sure to show that there is no connection.

A young man visits his mongoloid brother at an institution in the English countryside. Out in the courtyard they throw a ball back and forth. When the young man enters the institutions doctors office, he asks if his brother is doing well. Professor Fuller (Russell Napier) assures him hes doing fine. The doctor then asks the young man how he is doing. The boy is seemingly a happy go lucky, average kid. The pleasant young man says hes doing great and exits. The camera zooms in to a medical poster covering the human body and we then hear Bernard Herrmann's dreamy, but haunting Twisted Nerve whistling theme play over the opening credits (a medically themed psychadelic montage). The Twisted Nerve title theme was sampled by Quentin Tarantino in the first installment of his Grindhouse epic: Kill Bill (2003).

After the opening credits are over, we see the same young man in a small store. His name is Martin Durnley (Hywel Bennett). Martin sees a young beauty in the store shopping. Her name is Susan Harper (Hayley Mills). Martin grabs a toy duck off the shelf and as Susan walks out of the store, Martin walks out right behind her. The store manager runs out and stops them both and sees that Martin has in fact stolen the toy duck. They both are arrested and brought to the police to be questioned. Susan explains that she didnt steal anything. Martin looks innocently and says his name is "Georgie". He is now acting like a 6 year old boy. Susan explains that she will pay for "Georgie's" duck and they can just forget about this whole thing. The police let them both go.

We find out that Martin/"Georgie" is actually a relatively wealthy young man who lives with his mother and stepfather in a very nice home. Something is seriously wrong with this guy because he has a room full of toys and he even sleeps with a teddy bear and his mother treats him like a little boy. She serves him breakfast in bed and we see that Martin is very intelligent and witty as well. Martin watches Susan from a distance as she leaves her home. He wants to find out where she works, so he trails behind her and as he walks he whistles the Twisted Nerve theme. The theme is Martin's eerie creation. He follows Susan into a local library. When Susan sees him, she only sees "Georgie". "Georgie" seems desperate and he begins to claw at his tie and shirt, opening it in an almost erotic way. Susan begins to help "Georgie" button up his shirt and as she does this, "Georgie" gets a naughty look in his eye as he smells her hair. The head librarian sees the two together and gets angry because hes not sure if Susan is "dressing or undressing" "Georgie". Susan straightens up and tells "Georgie" she has to get back to work, but "Georgie" says he wants a book on animals and Susan gets him one.

When "Georgie" returns to his home, he changes back to his Martin persona and he finds out that his parents, namely his stepfather Mr Durnley (Frank Finlay) whom Martin loathes, are planning on kicking him out of the house. Martin is given two choices by his stepdad: Take a trip to Australia on a free ticket or move out of the house. Martin tells his stepdad that he chooses to head to Australia and he goes upstairs to pack. Martin begins to undress, then stares at himself in his mirror. It seems that Martin is sexually repressed and or confused. The camera pans into a magazine on Martin's desk, a Muscle Man type book, suddenly we hear a smash and we see Martin's mirror has been cracked right where his crotch area is.

Instead of going to the airport, Martin checks into a hotel and gives the hotel clerk a note. Martin then goes to Susan's mothers boarding house and shows up that night in the rain. The doorbell rings and Susans mother, Mrs Harper (Billie Whitelaw) answers it. "Georgie" is standing in the doorway, all wet and he hands Susan's mother a note from his father explaining that "Georgie" has been sent to stay with them. They invite him in, but tell "Georgie" that he cant stay because they have no rooms vacant. They call the number on the bottom of the letter and the hotel clerk reads the note Martin gave him telling her Georgie's father has already left on his trip. All this time, "Georgie" looks like a sad little puppy and we can see Susan is starting to feel bad for him. After Georgie leaves the house, she runs after him and tells him to come back. "Georgie" gets another strange look in his eye. Things are going just like he planned.

The next morning "Georgie" is introduced to the other two residents staying at Mrs Harpers boarding home. They are Mr Groom (Timothy Bateson), a reporter and Shashie Kadir (Salman Peer) an Indian medical student. They try to be polite to the man-child "Georgie". When one of the men cracks a joke, "Georgie" laughs like a deranged hyena. Mr Groom looks at "Georgie" like he's a wacko and gets up to leave, then says in a happy way "You just keep on laughing Georgie!".

That night, Georgie changes back into Martin , gets dressed all in black and sneaks out of the house. When Mr Durnley arrives home, he parks the car in the garage and as hes getting out, a dark figure closes the garage door behind him. Mr Durnley cant see who it is, but then Martin turns on his flashlight, flips out a pair of scissors and stabs Mr Durnley in the gut. Mr Durnley collapses and dies. Martin returns to Mrs Harpers boarding house and watches the scissors to get rid of any blood. Then he goes into Mrs Harpers room, acting as if hes had a bad dream. When he calls her "Mummy" she melts and lets him stay in her bed. Theres some sexual vibes going on between "Georgie" and Mrs Harper and in the silhouette we can see Mrs Harper may be doing more than putting "Georgie" to bed. 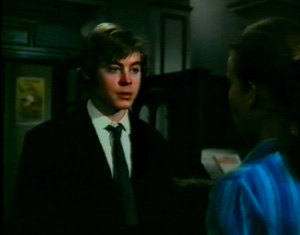 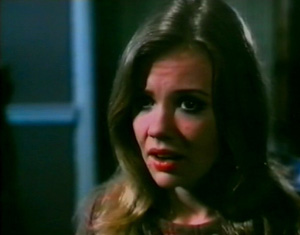 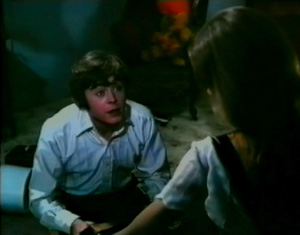 "Georgie" and Susan go swimming in a pond nearby and "Georgie" starts to yell for Susan that he needs help. Susan is stunned and begins to swim to him to save him from drowning. When she gets to "Georgie", he turns to her and says: "Ever been had?". Susan begins to laugh and they both get out of the water to dry off. While Susan sits and talks to "Georgie", he gets up and walks out into the middle of the grass behind Susan. "Georgie" removes his bathing suit and turns and stands totally nude in front of Susan with a naughty look on his face. When she sees him, she's shocked, but tries to ignore it.

Susan goes into "Georgie's" room and looks through his droors, she finds several books on Sexuality and Psychology. She senses somethings wrong and as she flips through one of the books, she sees the name "Martin Durnley" scrawled over and over again on the front page. She then remembers reading that someone namned Durnley was murdered days earlkier and had been reading it in the newspaper. She goes down to the kitchen and searches through the old newspapers and finds the artticle with the man who had been killed. Susan then decides to do some investigating on the matter. She goes to see her Shashie at his medical school and asks him about genes and mental illness. Then she goes to see Mrs Durnley (Phyllis Calvert). When she sees "Georgie's" picture on the mantle, she knows somethings really wrong. Susan finds out from Mrs Durnley that since Martin's brother was born a mongloid, she was afraid Martin may be mentally defected as well. She then treated him like a baby all his life, which explained in part why he adopted his childish "Georgie" persona to get attention from women he was sexually attracted to.

Back at the boarding house, "Georgie" is out in the shed chopping wood and Susans mother comes in. We can see Mrs Harper is sexually attracted to man-child "Georgie" and she starts to ask him about this Martin Durnley fellow. When "Georgie" hears her say that name, he begins to get visibly angry, and when Mrs Harper puts her hand in "Georgie's" pocket and starts rubbing him all over "Georgie" becomes Martin and pushes her away and yells at her: "take your filthy hands off me!". Then he grabs a hatchet and lets her have it.

When Susan gets home, she goes into "Georgie's" room, and we see he is behind the door, and he shuts it. Susan is in trouble now because she knows Martin is unstable. Martin has a gun and he tells Susan they need to go right now. Susan tells him she won't go with him and Martin gets batso. Then he tells her to put on a pretty blue dress. She does it, but Martin begins to ramble on about all kinds of strange things. When Mr Groom returns drunk after being fired from his job, he goes outside and finds Mrs Harper in the shed, chopped to pieces (which is implied, but we dont see this onscreen) and he begins to throw up.

Susan tries to escape but Martin wont let her go. Suddenly, he sees his reflection in the mirror, he smashes it in the same area where he sees his own mature sexuality. He then breaks down completely and throws himself on Susan, kissing her, when she relents and scratches his face, he goes apeshit and tells her "shes just like all the others!". Martin falls down, clutching her in one last attempt to gain her affection. The police barge through the door and drag him away.

Twisted Nerve was originally advertised as a slasher film when it was released in 1968, but it really isn't like a Friday The 13th type movie at all. Its more of a psychological thriller with a couple violent scenes both of which you dont see much of in terms of gore. Nonetheless, its a really good thriller. I really enjoyed this film, as sick as it is, but hey, I'm a cult film geek. I found the characters to be interesting, well acted and the movie moves at a good pace. As much as the film is creepy, it does have its comedic touches as well. I read some reviews of the film on IMDB stating it wasn't that good, but I have to disagree. Its not the best thriller ever made, but its definitely a cult classic. If you are a fan of psychological themed thrillers like Psycho, Repulsion, A Bell From Hell, Sisters and Black Christmas you will surely like Twisted Nerve.