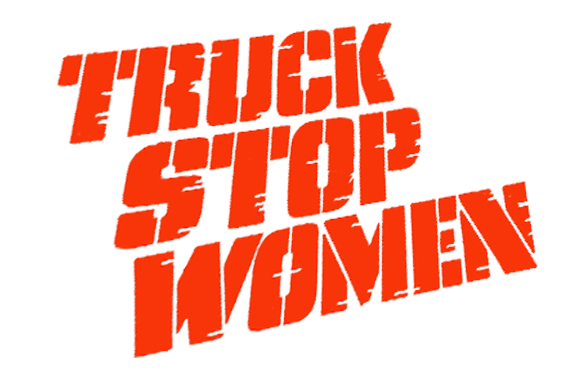 In the 70s if you wanted to watch something a bit seedier than what you could catch on TV, you could go to an urban grindhouse theater or a suburban drive-in theater. What made exploitation films at the drive-ins really special was you could watch the movies in the comfort of your own car.

Nobody could tell you to put on pants.

Claudia Jennings starred in a number of these drive-in movies: Gator Bait, Unholy Rollers, and Deathsport to name just three. Here in Truck Stop Women, to name a fourth, she plays Rose, daughter to Anna.

Anna is the owner of a truck stop, but not just any truck stop. It's also a brothel, a chop shop, and the headquarters of her highway pirate gang.

So, I guess it is pretty much any truck stop.

The operation is run as follows: there are cameras in the rooms and Anna monitors the post-coital conversations on a video phone (pretty cool piece of tech for the 70s) to see if her girls can get some information out of the johns about what they are hauling. If it's something good, she lets her crew know which truck has something worth stealing.

At other times her girls go out on the highways and pretend to have car trouble. When a trucker stops to help, they knock him out, steal his truck, repaint it, and sell it.

Overall, it's a well-run criminal empire, which is why the mafia have taken an interest. And this is actually where the movie starts. A couple of mafiosos interrupt a jacuzzi foot massage and kill a man we later learn was Anna's partner.

The mafia is moving in on Anna's business and she will have to use her wits and crew to fight them off.

If that were all the movie had to offer, it would be good enough, but Truck Stop Women has a further wrinkle: Anna's daughter Rose sides with the mafia. They promise her a more exciting life in Vegas and she's eager to get out from under her mother's thumb.

Or, maybe she really is loyal to Anna and is only pretending? Or maybe she has second thoughts when the mafia are too quick to resort to violence? No spoilers from me.

Whatever the case, there's more than enough drama and intrigue to keep the movie interesting throughout its runtime. Sure, it's drive-in camp with skin and violence, but it's engaging drive-in camp with skin and violence. And beyond working as a movie, it also works as a drive-in movie. Claudia Jennings is gorgeous as Rose. She looks great in her go go boots and hot pants, and looks even better out of a bath towel.

When we're not looking at Truck Stop Women's hot lot lizards, one of whom is played by Uschi Digard (Supervixens) by they way, we can watch semi trucks speed down the road and crash. Sure, it's not Mad Max, but Mad Max didn't have a naked couple on the side of the road for any of its chase scenes. Truck Stop Women does. The makers didn't have to do that. A chase scene is good enough, but they did. They did that for us.

So, we've got a good story, some fun characters, some skin, action, and the acting is actually pretty good for a movie of this calibre. Are we gluttonous if we expect more?

Probably, but we get more anyway: the music is awesome! It's CB-era country that pulls you right back into the 70s. Even if you weren't there the first time.

The filmmakers must have liked the music as well because about a half hour into the film there's a music video for one of the songs. They were having fun making this movie and it shows.

I highly recommend it.