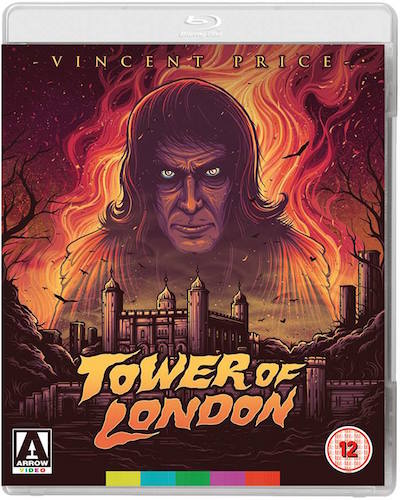 Having made their mark on American horror cinema with three colourful adaptations of Edgar Allan Poe – The Fall of the House of Usher, Pit and the Pendulum and Tales of Terror – Vincent Price and director Roger Corman enjoyed a brief hiatus from the macabre author with Tower of London. Shot in black and white, the film was loosely based on the Universal horror picture of the same name as well as two Shakespeare plays: a dash of Macbeth and a dollop of Richard III.

Price plays Richard of Gloucester, brother to a dying king and eager to take his place on the throne. When he is overlooked in favour of their sibling, the Duke of Clarence, things take a murderous turn. Richard goes on a murderous rage, only for the ghosts of those he has slain to return from the grave and haunt him…

Less well-known than the Poe movies, Tower of London is no slouch. Price relishes the opportunity to flex his Shakespearean muscles, just as he would eleven years later with Theatre of Blood, and Corman works wonders, as usual, with his low budget. If you’ve ever wondered what a drive-in Shakespeare film would look like, you’re in the right place!