When it comes to horror movies most people think that PG rated horror is often worse than R-rated due to the lower amount of blood n' gore, but I kinda disagree with that. There are a few examples of good PG horror like Poltergeist or Tourist Trap. These movies don't rely much on nasty FX, instead, they rely on creating a terrifying atmosphere and a really interesting plot. Speaking of Tourist Trap, recently there's been a controversy surrounding the film, but we'll get into that later.

Directed by David Schmoeller, the film is about a group of friends who go to a rural area. Unfortunately, after they find a tourist trap called the Lost Oasis (which has a mannequin display), their car mysteriously breaks down. They decide to stay for a while, but what they don't know is that the featured mannequins aren't your ordinary kind. They have a mysterious power and can kill you. After they kill you, a mysterious guy named Davey puts plaster on your face and makes a mannequin from your flesh. 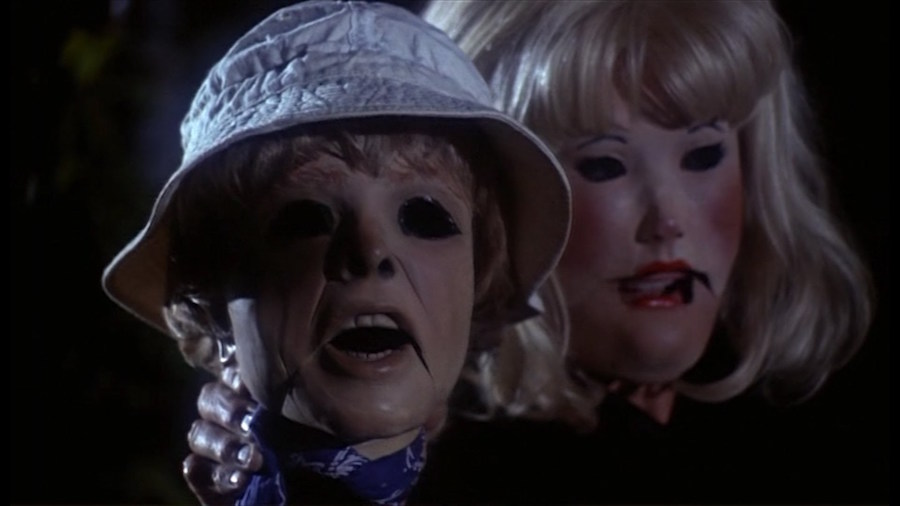 Of course, this sounds like some kind of generic fusion of The Texas Chainsaw Massacre and The Evil Dead, but remember what I said before? This film is PG rated. The gory scenes aren't as gory as you expect, but the plot is very intense. The other main character in this film is Slausen (played by Chuck Connors), the owner of said tourist trap. At first, we learn that it was famous back in the day. Then, after the government built the new highway, nobody came to his place anymore. Slausen appears to be a kind and generous man in the eyes of the teenagers. He claims that he and his wife built this place together, but sadly she passed away due to cancer and he decided to make a mannequin that looked exactly like her. But we later learn that Slausen has a twin brother named Davey (also known as Plasterface). Davey has a psychic power and is jealous of Slausen...this is the reason why he uses the mannequins to trap and kill people. In a shocking twist, we learn that (**SPOILER ALERT**) Slausen and Davey are actually the same person. He reveals that he killed his wife and his brother since he found out they were having an affair. At one point he decides that he won't kill one of the teenagers because she reminds him of his wife. Now, THIS is what I call a great story for a PG horror movie. As you can see, Slausen is a three-dimensional character. He doesn't kill people simply because the plot says so, he does it because of a haunted past that makes him lose control. He's the kind of villain that makes you feel terrified and sympathetic at the same time.

Okay, that's the TCM part of the fusion (in which a villain has a background and lives in rural area), but what about the Evil Dead part? Since "Davey" has a psychic power, he can make everything in the house move. From mannequins to household objects and these things kill the victims in horrific ways. I totally love the special effects in this film because they cleverly use practical effects to create the creepy atmosphere. And speaking of atmosphere, the score by Pino Donaggio is really effective. It makes you scared during the more frightening scenes and makes you wanna cry during the heartbreaking scenes.

But wait! Didn't I say that there's a controversy about this film? Well, recently, the film was released on Blu-Ray by Full Moon (in US) and 88 Films (in UK) and many fans were disappointed when they learned that there's 5 minutes of footage missing. I just watched the Blu-Ray today and, to be honest, since I've never seen this film before, the 5 minutes of missing footage doesn't really affect the storytelling at all...but that doesn't mean that Full Moon can get away with this. I think every film should be released in its original version. Anyway, there's also a rumor that the blu-ray isn't remastered from the original negatives, but that's another story.

Although it was made on a low budget and has pretty bad acting, this is a special horror movie that makes you scared, gets you to laugh and maybe even cry. Check it out, I guarantee that it will give you unique experience for sure.

REVIEWER'S NOTE: For those that interest in the recent Blu-Ray controversy, you can read information HERE