Sexy, violent, and stylish, Sergio Martino’s Torso is not only an ode to the female form (specifically the unclothed female), but also to man’s disturbing obsession with it. Every male character in the film seems to be driven by sex at all times (two men fondle a girl’s breasts almost on principal, an uncle ogles his niece through a crack in the door, a delivery boy fawns over his sunbathing customers) and even the female characters can't keep their hands off of each other. 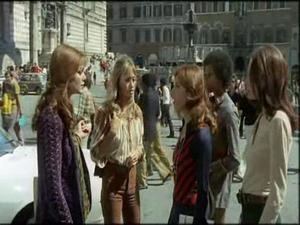 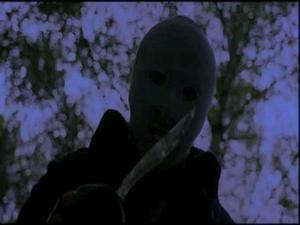 Needless to say, it doesn’t take a psychologist to realize that Torso, and its giallo brethren, say much about male sexual cravings, but rarely did the others toss in a high-minded concept like this twisty and sophisticated little cat-and-mouse game.

Opening with a bang (pun intended), Torso artfully interweaves scenes of an orgy and its accompanying photo session with dialogue on Italian art and cryptic visuals of a doll’s desecration. This collage of images is handsomely prepared and sets up the viewer for the crafty camera work and lustrous sights to come. It also shows off some of its female cast’s finest “assets,” but never seems overtly exploitative. The women on screen are truly sights to behold and Martino utilized their beauty out of admiration, not objectification. The men on screen are the ones that are deviants, not the ones behind the camera.

It turns out that all this talk of art was a class lecture at an Italian university. Our protagonists are a group of intelligent young ladies who seem to possess a genuine interest in art history, as well as an interest in their teacher. The aforementioned stud (Franz is his proper name) does get quite a bit of attention from his female students, but has a crush on American expat (and main character) Jane. Unfortunately, Jane’s best friend, Daniela, also has an admirer, but he is the less-attractive, creepy, and violent Stefano. This troubled young man is a perrenial line stepper, even going as far as to rough up a hooker and nearly assault Daniela outside of her home. It’s brutally obvious that we’re supposed to think he's the antagonist in this "psychosexual" thriller, but Italian horror enthusiasts will be able to catch this red herring from a mile away.

While Stefano deals with his libidinal issues, a masked killer prowls the area, seeking female victims. He’s a well-dressed man, rocking chic black driving gloves, a red and black silk scarf, and a tight grey ski mask. Within the first twenty minutes, this character is up to no good; strangling a college gal with his scarf, smashing her face into a windshield, and fondling and dicing her lifeless corpse. He follows this heinous act up with a drowning/eye plucking, crushing vehicular homicide, and a garden-variety throat slashing.

All of the murder sequences are top-notch, boasting original death blows and POV shots that would later be employed in flicks like Black Christmas and Halloween. Martino decides to lend each death scene its own feel, utilizing a variety of settings and murder weapons. 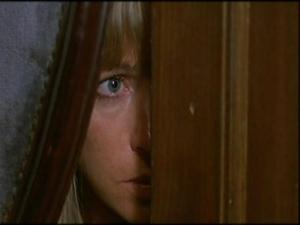 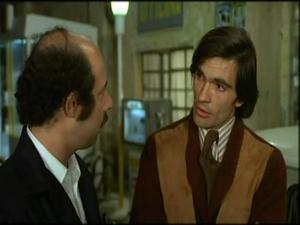 The first murder is brutal and fast, featuring a vicious strangling and some up-close slicing and dicing. The victim is also sexually assaulted, which lends a sleazy, sexual bent to the killer's murder motif. Albeit that the chest that receives the stab wounds is obviously plastic, the scene still sends shivers down the spine and sets quite a precedent.

The second murder is more of a visual feast than the first, boasting an eerie atmosphere and elegant execution. Carol (the victim) gets lost in the woods after running from some unfit suitors (the boob grabbers from the opening paragraph). As she tries to retain her sense of direction, she senses something stealthly moving amongst the trees. Squinting to see through the heavy fog, Carol suddenly sees the masked killer before her, glowing in the distance as mist surrounds his body.

It's quite a striking sequence, reminiscent of Bava's use of enveloping fog in Black Sunday. The lighting is also quite exceptional and adds to the mystique and aura of the masked assassin.

As for the finale, I've never been one to divulge too many details about how a flick wraps, but a few nuggets of info won't hurt. The strong and perceptive Jane is forced to quietly hide from the killer as he saws the limbs off of her unfortunate friends. The closing moments are almost entirely silent, abandoning dialogue and other elements which are so often used to propel a plotline. Martino instead utilizes his imagery as a visual storyteller, creating an unforgettable conclusion that is at once suspenseful, disquieting and strikingly adept.