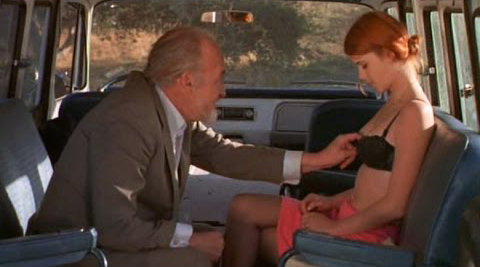 Moonshiner Uncle Mose (Johnny Rocco), full of ‘Mountain Dew’ eyes up his buxom ward Tootie (Dixie Donovan). Tootie’s cousins, Caroline and Lulu, relive erotic memories of travelling carny (Bukalew). Rejected by Mose’s wandering eye Aunt Liz (Debbie Osborne) throws herself at any man that comes her way, namely a moonshiner hunting Sheriff and a debt collecting Banker. Exhausted by their sexual adventures the three young cousins are interrupted from their slumber by a trio of good ‘ol boys who indulge their ‘Dew’ fuelled lust. Mose guides lost tourist Danielle, their language barrier overcome with moonshine and a roll in the hay. By the end of the day everyone returns home happy, you can’t blame a man for what he does with a belly full of that old ‘Mountain Dew’, and even if you could none of the women around here are complaining.