To Trap A Spy 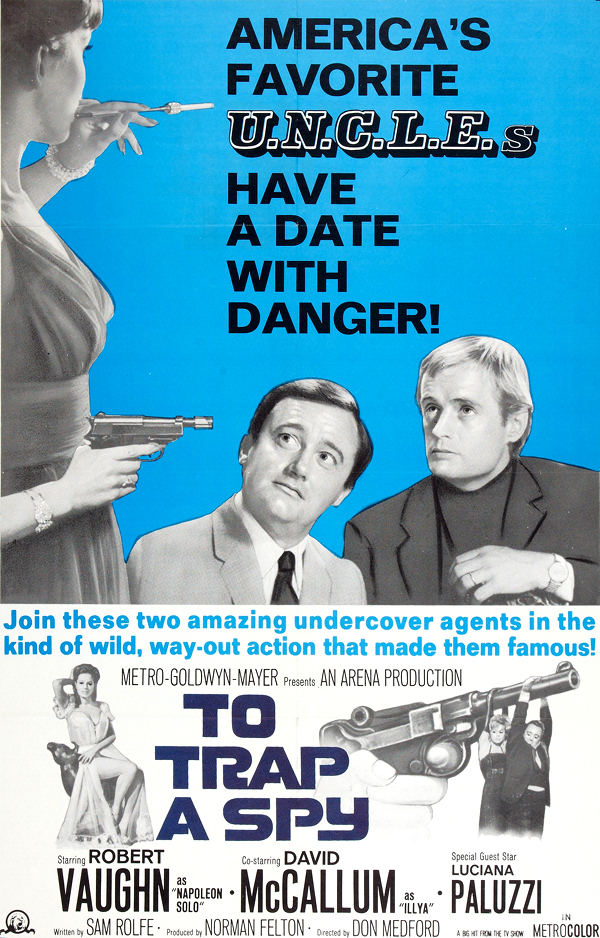 To Trap a Spy is the feature-length film version of the pilot episode of The Man from U.N.C.L.E. starring Robert Vaughn and David McCallum. It is the third and longest version of the same story. The original pilot "Solo" was filmed in color and, as was standard at the time for U.S. network television shows, shown primarily to network executives to gain their approval for a series. After the series was ordered the pilot episode was edited down to fit a one-hour timeslot, modified somewhat to – among other minor changes – substitute Leo G. Carroll's character Alexander Waverley for that of Mr. Allison (played by Will Kuluva), and broadcast in black and white (as was the rest of the first season of the show). The movie version started with the color pilot footage, added in additional footage and subplots (also in color, and including a new subplot featuring the actress Luciana Paluzzi), and was first released in Hong Kong in late 1964 and later shown in the U.S. as a double feature with The Spy with My Face in early 1966. In the UK it was originally released as a support feature to the James Garner/Julie Andrews comedy The Americanization of Emily in 1965, but its release coincided with the broadcast of the series. It later appeared as a top billed feature in many cinemas. (Wikipedia)