A young girl plays in a park, looking at the beautiful leaves. She picks up a leaf and brings it to an old man. The old man lifts her up and smiles, but suddenly his facial expression changes and a dark bile-like tobacco juice seeps from his mouth. In the next shot, we see his face from the little girls point of view. He is raping her. Later, as the police take the man away, the girls mother holds her and when the man tries to say he's sorry the woman slaps him.

Flash forward to several years later, Frigga (Christina Lindberg) is now a beautiful teenager living on a farm with her adoptive parents. She is not a regular girl anymore since she became mute (unable to speak) after the savage rape by the old man. Two of the local women goto get their milk from Frigga on the farm and as they leave they gossip about what's wrong with her. 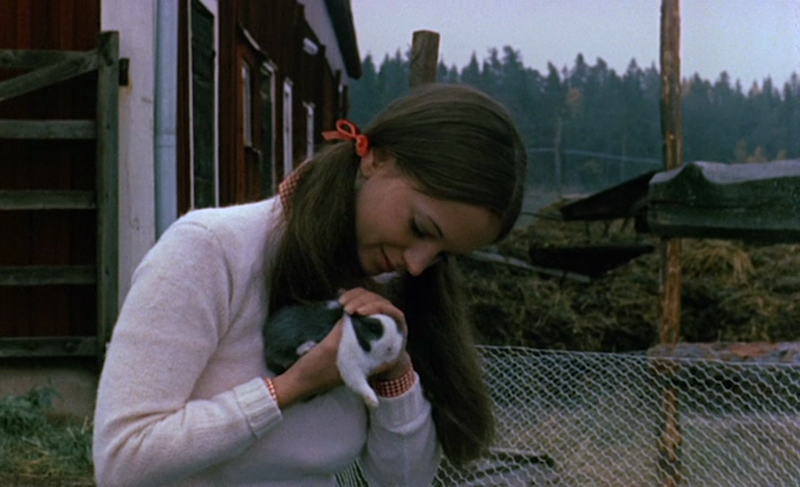 Frigga decides to go into the city one day and as she comes to the end of her road, she just misses the bus. While looking at the schedule, a man in a sports car stops and asks if she wants a ride into the city. She accepts his offer and they take off. While driving along we get to know Tony, he is a smooth talking guy who gets Frigga to smile. He tells her all about his new car and although unable to speak, Frigga seems impressed by him. When they reach the city, it is nighttime and Tony takes Frigga out to dinner. He orders for both of them and they enjoy a nice meal as he shmoozes her up. Afterwards he takes her back to his place and they have a few drinks. When Tony goes to get some liquor we see a quick shot of what looks to be some kind of drug in a glass vile. Things seem pleasant enough at the time. Tony talks to Frigga, and she finally relaxes some and sips the wine. As he looks at her, we see from Frigga's POV that she's starting to get blurred vision. The wine was laced with something.

When Frigga wakes a few days later, Tony tells her that he wants her to sign a letter he wrote to her parents. She gets up and tries to run away, but before she can get out the door, Tony slaps her, knocking her out and brings her back into the room. He then shoots her up with more of what he has been giving her: heroin. As the screen shows a calender page, we see days go by. Frigga is now hooked on smack, but she doesn't realize it. When she wakes up again days later, she runs out of the room and this time she makes it down the street and into a park, but she collapses from exhaustion and Tony brings her back to the house once again. 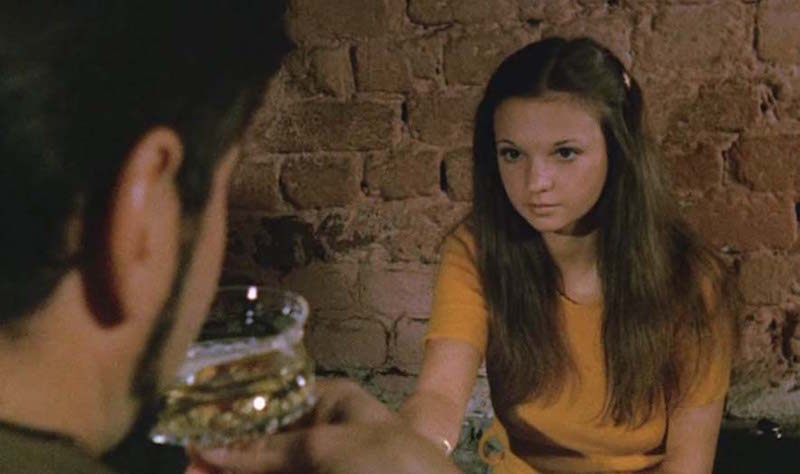 Tony explains that she is hooked on heroin and unless she cooperates with him, she's going to be in big trouble. He tells her that in return for her "services" for him she will receive her heroin fix and some money. Frigga seems cooperative but when Tony sends the first "customer" to see Frigga she scratches his face, leaving big red bloody marks. When the man yells to Tony about what Frigga did, we realize she is in deep trouble. Tony enters the room with a scalpel and we see a deadly shine. He then holds Frigga down and slowly we see the scalpel from Frigga's point of view come closer and closer. As the scalpel cuts the eye, it bursts Un Chien Andalou style. Note: Theres a rumor about this scene that Director Vibenius used an actual corpse for the close up eye gouging. 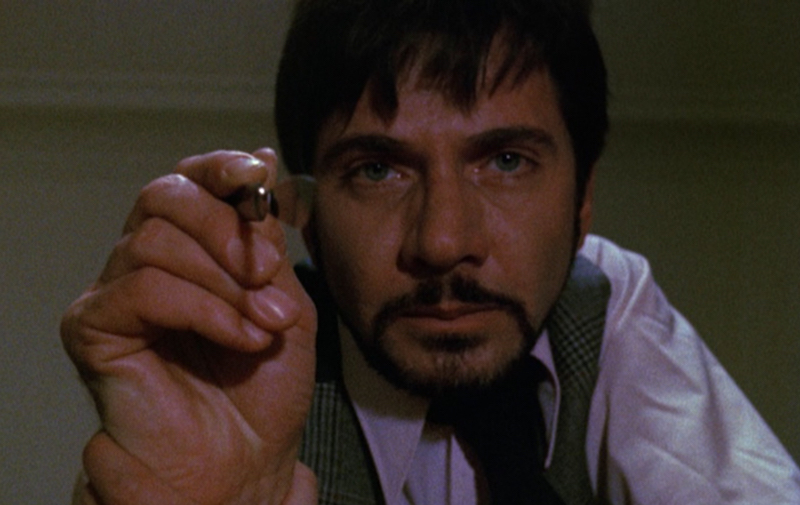 Tony sends Frigga's parents a note saying she is not coming back and that she never loved or trusted them. Her parents are crushed and both commit suicide over the depression from the heartbreaking letter. This part of the film hit me the hardest, because you could see Frigga's mother's face full of anguish and hurt. Frigga decides to take the bus back to the farm to let her parents know she's ok. We see that Frigga's colored eyepatch matches her outfit (bright red), and she looks sexy and very devilish at the same time. When Frigga arrives at her home, she sees the funeral caskets and overhears her neighbors talking about how her parents couldn't get over her devastating letter and so they committed suicide.

Frigga decides to train herself for her big revenge spree. Yet, instead of being full of rage, we see her methodically learning new skills: martial arts, guns, and stunt driving. Meanwhile, back at the whorehouse, Frigga has her first lesbian client. This woman has to have the manliest flat chest Ive ever seen in a film. Pretty nasty looking stuff. When Frigga goes to see her friend in her room, Frigga discovers a very very bloody scene. The girl's bed is drenched in blood and Frigga breaks down and nuzzles the girls bloodsoaked pillow. Frigga then takes all the money she's saved from her work as a prostitute and goes to see an underground dealer. Even though she cant speak, he still is able to figure out what she wants: a brand new car and enough heroin to hold her over until the revenge spree is over. Frigga goes back to the academy where she's been training as a marksmen. She breaks into one of the gun sheds and saws off a shotgun, then she grabs some shells and leaves. 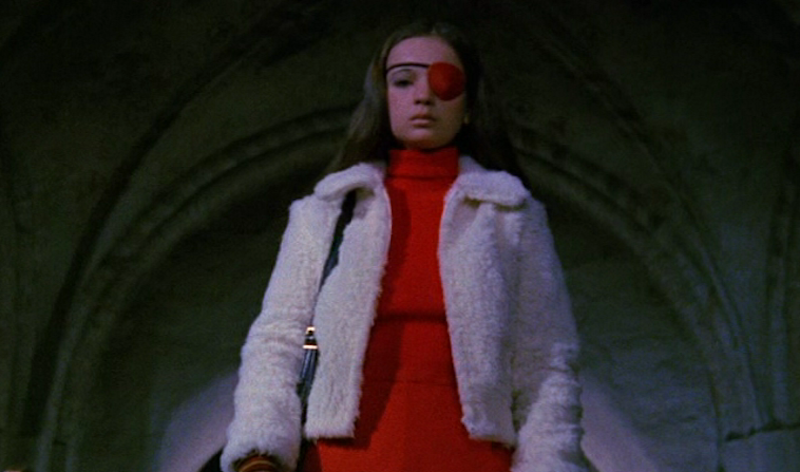 The rest of the film, Frigga begins her rampage of revenge on her pimp's clients. Her first area of attack is the big guy who's been banging her regularly. Frigga rings the doorbell, when the dude opens it, she blasts him in the head and in the chest. These revenge killing scenes are all in slow motion, it echoes the balletic action bloodletting that we first saw in Sam Peckinpah's masterpiece The Wild Bunch. The only difference being it's even slower and the bloodletting isn't as heavy. At least I didnt feel it was. They act as a drawn out catharsis for Frigga who has been used over and over. We can get the sense these slow motion attacks are her only way of filling herself with emotion. Frigga's next area of attack is a race track where Tony and his friends hang out. When Frigga arrives she opens up her gun on Tony and his friends who are talking about her. She hits two of them, but luckily for Tony, he gets away.

Tony hires two hitmen to find out who Frigga's contact is on the underground. When the hitmen go after Frigga, she ends up in a trap at a warehouse and she systematically and quickly shoots them both, again in the cathartic slow motion style Vibenius uses throughout the film. When the police arrive, Frigga doesn't try to run away, but instead lets the cops arrest her. Suddenly, like a super hero Frigga breaks free and in the longest slow motion fight in the film, she beats the crap out of each cop. Blood streams fly forth in slow motion. She then steals the police car and drives off with sirens blaring. Frigga begins to drive around, on a random spree, running people off the road. I didn't understand this segment, but I guess its because Frigga has completely lost her mind and is just out to kill any man she sees. Frigga gets to a harbor and when she is searching for her next victim, she gets shot at. She barely escapes without getting killed. 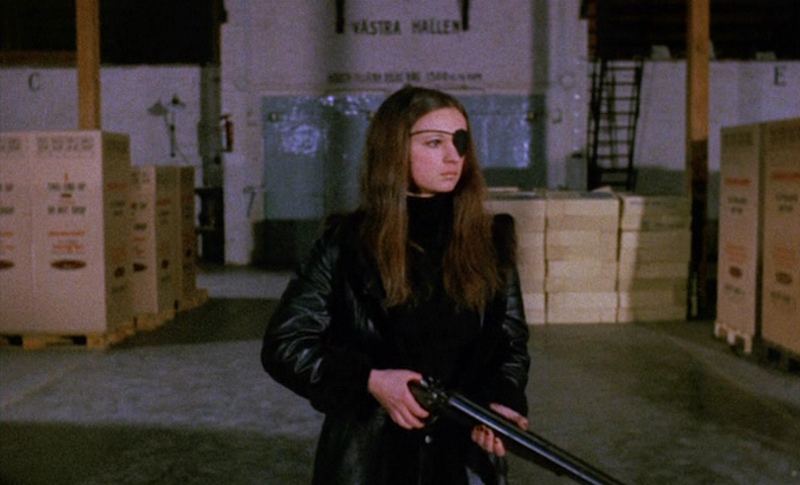 Last on her list is the man who started this whole hellish nightmare for her. She writes Tony a letter saying that she wants to have a duel on the fjords. She waits with her shotgun alone as the wind blows. Tony finally arrives and tries to charm his way out of the confrontation. When he tells Frigga to drop her gun, she does. Then like the scumbag he is, he goes to shoot her, but Frigga pulls out her small pistol and fires, hitting Tony. She then fires into his leg two more times so he cant move and ties a rope around his waist to drag him by a horse. We see Tony is buried under some rocks up to his neck and Frigga ties another rope around his neck. She ties the other end to the horse and places a bucket of food or water a few feet away. When the horse decides to go for it, Tony loses his head.

Thriller: A Cruel Picture initially caught the attention of film fans when Quentin Tarantino cited it as being a big influence on his grindhouse homage Kill Bill. The character of Elle Driver was patterned after Frigga's eyepatch wearing vigilante. After seeing the movie many times, I personally think Elle actually has more in common with Snake Plissken of Escape From New York, from her one eyed look to her personality. 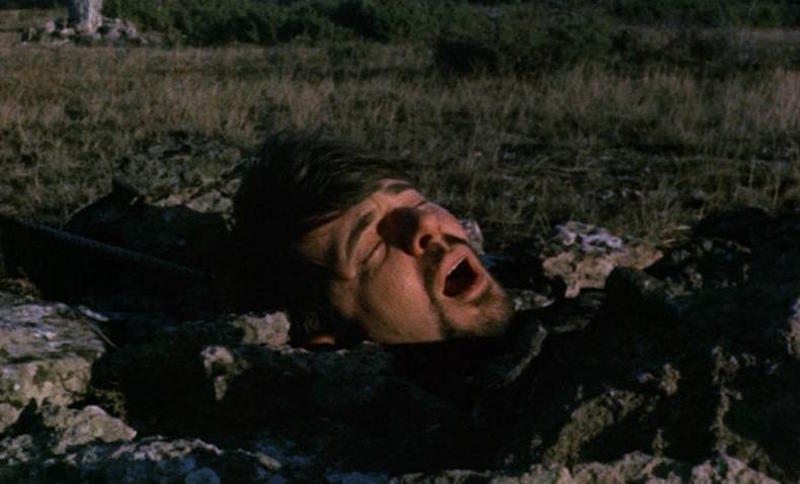 Although Thriller has become popular since being rediscovered on home video, I never was a huge fan due to its lack of convincing character motivation and the dull slow motion sequences. I think the film I Spit On Your Grave (which also deals with rape and revenge) is just better on every level. Still, cult film fans will want to see this Swedish exploitation classic at least once.