The Warriors takes place in New York City in the late 70s. The gangs in the film are all of different races and backgrounds and come across as almost comic book inspired tribes. They all have their own colorful names like: The Baseball Furies, The Orphans, The Turnbull AC's and The Rogues and wear specific gang clothing. Some are dressed in 40s zoot suits, some as baseball playing mimes, some have skinheads, some are in sparkling African tribal robes. The film is based on the novel by writer Sol Yurick. With Walter Hill's telling of this heightened reality gang story, we can see shades of Homer's The Odyssey and Xenophon's Anabasis playing underneath.

Hill explores the themes of honor and loyalty giving us a great look into just what makes people stick together during tough times. The Warriors themselves made up of a real melting pot of racially mixed teens: Swan (Michael Beck) Ajax (James Remar) Cowboy (Tom McKitterick), Cochise (David Harris), Cleon (Dorsey Wrights), Snow (Brian Taylor) Fox (Thomas Waites) and Vermin (Terry Michos). The aptly named character Rembrandt (Marcelino Sanchez) is a Puerto Rican artist, the graffiti tagger of the gang who spray paints the Warriors name wherever they go.

The head leader/preacher that wants to unite the large number of gangs around NYC is named Cyrus (Roger Hill). Cyrus explains that if the gang factions keep a truce and work together as one large organization, soon they could take over the entire city. The gangs cheer Cyrus on and he seems to be getting through, but suddenly he is senselessly shot by the evil Rogues gang leader Luther (David Patrick Kelly). Luther exclaims that one of The Warriors did it. He screams it out and all the gangs believe it was them. After the killing of Cyrus, the hundreds of gang members all scatter when the police arrive on the scene. The Warriors are now marked for death by every gang in the city and have to dodge the cops as well. 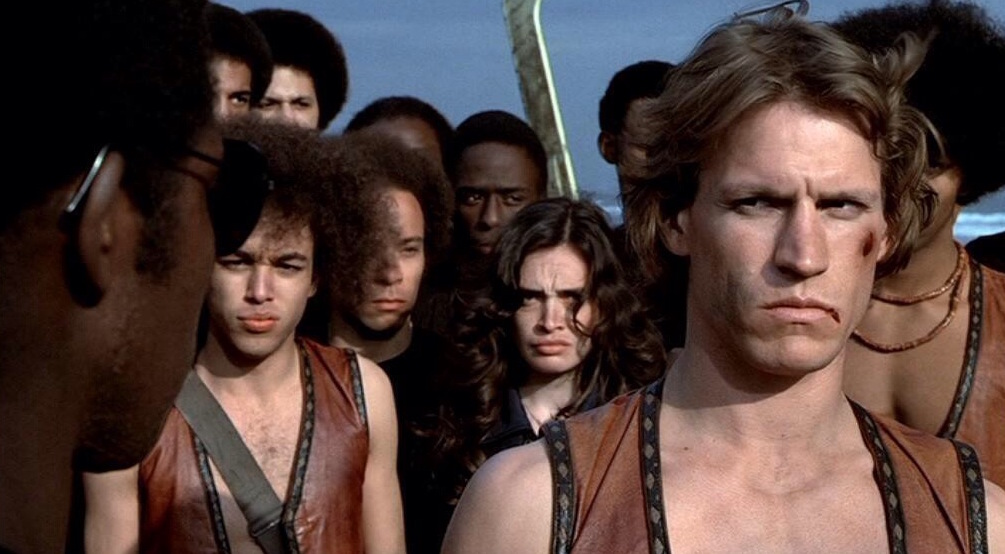 This night will be the test of just how strong a group they truly are. There is a long desperate journey, moving through the different burroughs. The Warriors encounter a gang called The Orphans that weren't part of the gang meeting. Things are okay at first, but a local girl named Mercy (Deborah Van Valkenburgh) taunts The Orphans for not kicking The Warriors's asses on the spot. When the leader of The Orphans gets annoyed, he tells The Warriors they can pass without a fight if they take off their colors (gang jackets). Swan refuses and tells the leader to "fuck off" and with that retort The Warriors keep moving. The Orphans chase after them, but Swan lights a molotov cocktail, throws it at a car, and it explodes. The Orphans don't give anymore of a chase. When the gang make it to the subway, things get complicated when cops show up, forcing them to scatter.

Rembrandt, Vermin and Snow have their own trouble when they encounter a deadly gang of women called The Lizzies who seduce, then try to kill them (modern sirens?). As they move through the neon lit, rainy shimmering streets and the trash filled darkness of the city they find themselves becoming split up again after the gang members get chased by the police and other rival gangs out to get them. One of the main highlights of the film is the fight with The Baseball Furies, who don't talk (mimes), paint their faces (inspired by the rock group KISS) and wield baseball bats.

The gang, tired and spent, finally make it back to their home turf in Coney Island where the film's opening credits began. After being chased by every gang in NYC all night long, they are confronted by the same gang who framed them in the beginning. Luckily, before Luther gets to shoot Swan, The Warriors are recognized as scapegoats and let go by an African American gang that have been watching things throughout the night called The Gramercy Park Riffs while the gang that started the entire thing are confronted and punished. As Luther screams out in terror, The Warriors slowly walk into the sunset and 70s guitar hero Joe Walsh's rock anthem "In The City" blasts out over the end credits. The song is dedicated to The Warriors by the same female radio DJ (Lynne Thigpen) that through the entire film has been riduculing them on the air as they ventured through the city's mean streets.