The Stewardesses (1969, USA) is a Sexploitation film directed by Al Silliman Jr. 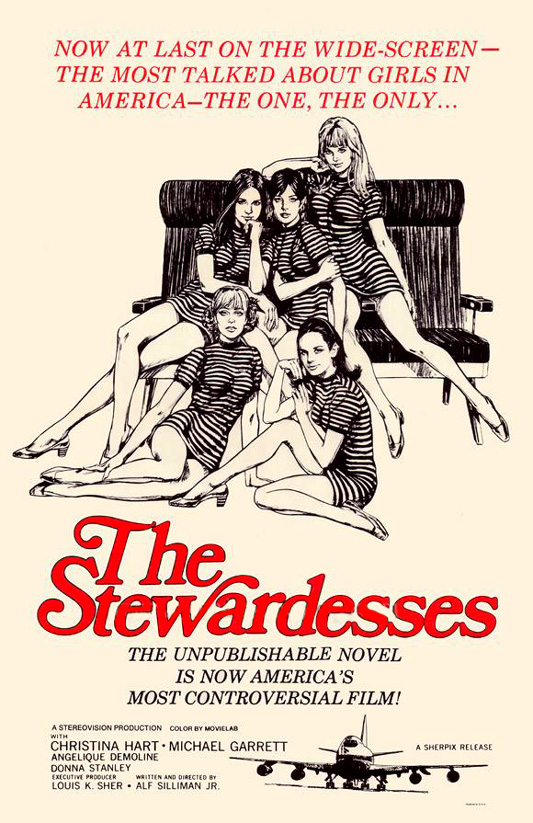 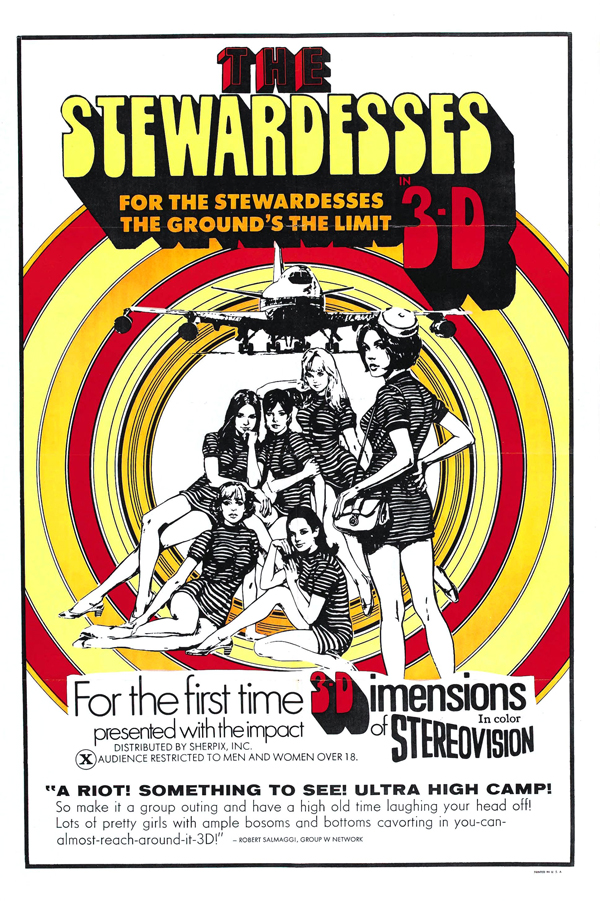 The Stewardesses began as a low budget side project and it was intended to be just another simple softcore skin flick. The movie's plotline was extremely simple, it revolved around a crew of airline stewardesses who are on their break. They basically hang out, party and have sex. When the film started to do good business at small adult theaters, the producers decided to add more footage and wanted to give the film an R rating so it could be seen in mainstream theaters across the US. This was a unique case because the movie evolved with new scenes inserted as it played in theaters. Nevertheless, the movie slowly transformed into a megahit. The producers also created a large exploitation marketing campaign for the movie with colorful banners, billboards and radio spots which were placed in every city the film played in. Although it never had a true promotional trailer, by using this roadshow style marketing campaign, the film became more and more popular. This advertising extravaganza cranked up the film's notoriety and word spread everywhere that The Stewardesses was the new movie to see! Another reason the film was so big was the fact onscreen sex was a brand new industry. This was actually a few years before Deep Throat came out. In reality, The Stewardesses really wasn't true porn, there were no hardcore sex scenes, just nudity. Yet since it could reach a wider audience, it became a great date movie and was very popular in college towns across the country. The initial (self imposed) X rating caused alot of buzz in the early days of its release but by the final year of its run, the film was pulling in a massive amount of filmgoers. This made it possible for the producers to book large venues such as The Boston Music Hall which seated 4300 people. It showed at a theater in Denver, CO for over a year and for several months at most theaters in the US. A standard "R" rated version was finally released in 1971, and it was played in at least 30 overseas markets eventually.

The second factor that attracted audiences to The Stewardesses was of course the special 3-D aspect. From 1952-1955, 3-D had become the new sensation in film. Films such as House of Wax, It Came From Outer Space and Robot Monster were big hits. After a 5 to 6 year lull, a revival began with films like The Mask and several years later in 1970, Stereovision, a new company founded by director/inventor Allan Silliphant (brother of screenwriter Stirling Silliphant) and optical designer Chris Condon, developed a new 35mm single-strip format, which printed two images squeezed side-by-side and used an anamorphic lens to widen the pictures through Polaroid filters. Producer Louis K. Sher (Sherpix) and Stereovision then released The Stewardesses. The 3-D used in The Stewardesses created images that enhanced the movie by featuring scenes with feet and other objects popping off the screen, as well as shots that made the rooms look larger. Specially trained 3-D technicians were sent to every theater to install the special 3-D equipment, and to teach the projectionists how to keep it all running. Camera operator Dan Symmes went on to direct the first 3-D hardcore film, The Starlets in 1976, and is a still active consultant in the 3D movie field. Allan Silliphant is likewise active in his advocacy of 3D film technology.

The Stewardesses cost $100,000 USD to produce, and ran for up to a year in several markets. It eventually earned $27 million in North America, alone ($114 million in 2007 dollars) in fewer than 800 theaters, becoming the most profitable 3-Dimensional film to date, and one of the most profitable films ever. It was later released in 70mm 3-D.

3-D legend Chris Condon, and Director Ed Meyer, are set to remake The Stewardesses, the most successful 3D film in history, in XpanD 3D, RealD and Dolby 3D in 2009.