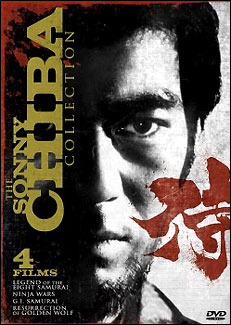 G.I. SAMURAI (1979 - Color - 139 min - Not Rated) A squadron of Japanese soldiers find themselves transported through time to Japan's feudal period, 400 years in the past, where rival Samurai clans are battling to make their leader the supreme Shogun. Chiba stars as the squad leader, Lt. Iba who seizes the opportunity to make his dream of becoming the ruler of Japan a reality.

NINJA WARS (1982 - Color - 100 min - Not Rated) In this epic battle between man and black magic, Lord Danjo will stop at nothing while on his quest for power which creates a dangerous obsession with the beautiful princess Ukio. Vowing to protect her is her ninja teacher and beloved Jotaro. Chiba is featured in a scene-stealing performance in this epic fantasy-themed love story that's filled with action and adventure.

LEGEND OF THE EIGHT SAMURAI (1983 - Color - 136 min - Not Rated) A princess whose clan is destroyed by an army of phantom warriors, bands together with eight masterless samurai to defeat the ghostly swordsmen. Along the way, they learn that a powerful witch is in command of the ghosts, and it is she that must be defeated in order to enact their brutal but necessary vengeance. Chiba is a standout in his portrayal of the authority figure among the eight deadly samurai warriors.

RESURRECTION OF GOLDEN WOLF (1979 - Color - 134 min - Not Rated) Yusaku Matsuda stars as a seemingly run-of-the-mill corporate salary man who leads a double life as a vicious criminal by night. In a delicious scheme of payback, he seeks to dominate the corporation that employs him by day with no reservations about the violent and dastardly actions he must undertake in order to achieve his goal. Later remade as a weekly television show, the film costars Sonny Chiba as a blackmailing con artist who dominates the screen with his cool brand of charisma.