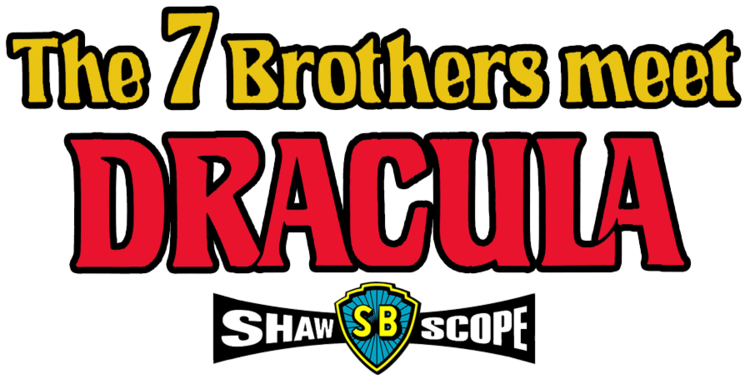 “It’s Fist Vs. Fang in Dracula’s Kung-Fu Showdown!” Hell yeah! If that tag-line doesn’t grab you then you seriously need to get your sorry ass up out of that chair, leave this theatre and head straight across the street to the muthafuckin’ multiplex where the latest Jennifer Aniston vom-com is waiting to anaesthetise your mind. Here at GCDb its 1974 and every Grindhouse ghoul’s wildest dream just came true: the UK’s premier producer of Gothic horror thrills Hammer Films have signed a co-production deal with Hong Kong’s masters of martial arts madness the Shaw Bros and the result is a mind-boggling mixture of ghouls, gore and kung fu fighting.

Transylvania 1804: a Chinese monk makes a pilgrimage to a familiar foreboding castle in the mountains. ‘Who dares disturb the sanctity of Dracula?’ lisps the vampire Count as he pops out of his tomb plastered with more pasty faced make-up and lipstick than Dame Barbara Cartland. The monk’s name is Kah and he has come to beg the lord of the undead to grant him the power to resurrect 7 legendary Chinese vampires. What Kah stands to gain from having 7 blood-thirsty ghouls on the loose is not made clear however Dracula is obviously fluent in Cantonese as he decides to possess the monk’s body and take a vacation to the Far East.

The film cuts to Chung King 1904 where world renowned expert in all manner of weird shit Professor Van Helsing is giving a lecture on ancient Chinese folklore at the university. He tells of the legend of the 7 Golden Vampires who once reputedly menaced the inhabitants of small rural village and we are shown the shocking sight of 7 sacrificial victims, strapped to coffin lids, encircling a cauldron of bubbling blood. A brave local makes an attempt to rescue his daughter from the clutches of the fanged fiends but one of the golden masked monsters thrusts his sword through the poor girl. The man runs for his life but not before yanking a golden bat-shaped pendent from around the vampire’s neck. The evil Kah bangs repeatedly on a golden gong to summon a posse of long-haired, skull-faced zombies from a nearby graveyard and the Golden Vampires take after the terrified villager on horse-back (a slow-motion image possibly inspired by the Templar Knights of Amando De Ossorio’s ‘Tombs of The Blind Dead’). They catch up with him and promptly slit his throat but not before he has placed the bat-shaped medallion on a roadside Buddhist shrine. When the pendants owner tries to retrieve it he bursts into flames and dissolves in a plume of blue smoke.

‘I believe the legend to be true’ proclaims Van Helsing but the assembled students think its baloney. All except one; Hsi Ching (played by Shaw Bros kung fu superstar David Chiang) creeps into the Professor’s hotel later that night to reveal that it was in fact his grandfather who destroyed the 7th Golden Vampire and he produces the golden bat medallion to prove it.

Having rescued Van Helsing’s foppish son Leland from a gang of murderous Tongs, Hsi Ching asks the Professor to join him and his 6 brothers on a mission to eradicate the vampire curse from their village. A rich globe-trotting Scandinavian widow by the name of Vanessa Buren, who just happens to be a big fan of the Professor’s peculiar brand of supernatural anthropology, agrees to finance the expedition if they agree to take her along - ‘A vampire hunt sounds exciting’, she chirps cheerfully. The gang don’t get far before they are ambushed by the terrible Tongs and much chop socky ensues. ‘It was the most fantastic display’, Van Helsing congratulates Hsi Ching, ‘I’ve never seen anything like it’. One gets the impression that this is Peter Cushing speaking directly to David Chiang as much as it is an exchange between their characters.

‘Strike at their hearts’ yells the Professor when the team are surprised by a vamp attack while sheltering in a cob-webbed cave and Hsi Ching promptly thrusts five fingers of death through a vampire’s rib-cage. Refusing to be upstaged by the martial arts professionals Peter Cushing launches into his trademark Errol Flynn style swashbuckling, fencing with a flaming torch in a dynamic duel with a white-wigged vampire. When the blood-suckers are stabbed smoke pours forth from their wounds and their faces deflate like punctured balloons. Our heroes finally reach the village and hurry to lay traps before night falls. Mrs Buren strips down to her ‘Die Hard’ vest ready for action. Up in his lair Kah is furiously banging his gong and judging from the ghouls a go-go in the cemetery outside its loud enough to wake the dead!

‘Legend of the 7 Golden Vampires’ was one half of a 2 picture co-production deal between Hammer & Shaw Bros the other being the espionage thriller Shatter staring Stuart Whitman. Shot partly on location but mostly at Shaw Bros studios in Hong Kong, by all accounts production (on both films) was difficult for all concerned. Shaw Bros star director Chang Cheh was brought in at Run Run Shaw’s insistence to re-shoot some of ‘Legend of the 7 Golden Vampires’ fight scenes and the film soon went over budget.

Despite the involvement of many Hammer regulars behind the scenes the film bears little resemblance to previous entries in the studios Dracula series which makes the harsh criticism it has received from Hammer purists rather redundant. ‘Legend of the 7 Vampires’ (or ‘The 7 Brothers Meet Dracula’ as it eventually became known in a re-edited form in the U.S.) is without question a Shaw Bros film albeit with Hammer horror guest stars. The plot is perfunctory and the script generally bland and frequently nonsensical however, as in all Shaw Bros productions at that time, the frantic action and outrageous visual excesses are given precedence and when judged on these aspects the film is a resounding and mightily entertaining success.

Visually striking highlights include the eye-watering Mario-Bava-on-acid colours that bathe Dracula’s castle in the opening scenes; the zombie uprising in the graveyard which manages to be both ridiculous and eerie in equal measure; and the circle of 7 sacrificial maidens bound and screaming before the cauldron of blood in the Golden Vampires lair. The phantasmagoric supernatural lighting, eccentrically detailed set design and wacky special effects all contribute to the stylised atmosphere of unreality. The 7 Golden Vampires themselves are really cool, with their crusty porridge caked faces and matted fright wigs, frantically dashing about snarling. The final showdown is an orgy of kung fu carnage with nibbled necks, severed hands, stabbings and slashings galore.

Dracula’s involvement in proceedings is obviously an afterthought and he could have been left undisturbed in his coffin with no ill effect to the film. Although often singled out by reviewers as one of the film’s most dire shortcomings, to me John Forbes-Robertson’s much criticised pantomime face-paint and camp villainy seem strangely appropriate within the delirious cartoon colours of the Shaw Bros redecoration of Dracula’s castle. The Prince of Darkness appears here as a cracked actor, a painted shadow, a comic book monster in a kung fu fairy-tale.

Peter Cushing lends his usual attention to detail in the mannerisms of his performance and Hammer intended Van Helsing to continue his international adventures with a further film set in India but this was never to be. The sun was slowly setting on the golden age of the British horror film. ‘Legend of the 7 Golden Vampires’ would be the last vampire feature film to be produced by Hammer until ‘Let Me In’: 2010’s generally acclaimed but ultimately uncalled for re-make of the superb Swedish ‘Let The Right One In’.