< The Return of Dracula 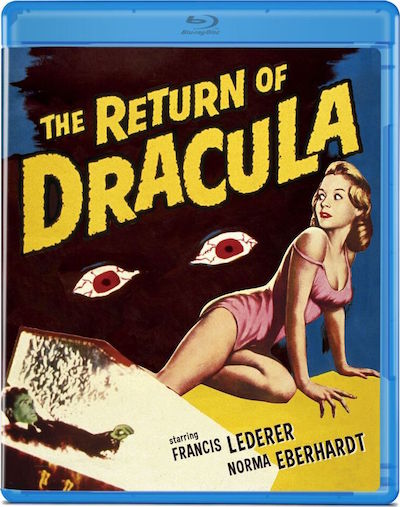 For those who like their vampires with that certain European panache, The Return of Dracula is sure to thrill. Francis Lederer (Terror is a Man) stars as the titular Count – this time using the pseudonym Bellac Gordal –as he travels from his Transylvania home to the United States. In the guise of being a distant relative on vacation, The Count takes up residence at the home of the Mayberry family in sunny California.

Quicker than you can say "I like my stake rare," The Count ...er... Gordal is up to his old nocturnal tricks and comes under the scrutiny of young Rachel Mayberry (Norma Eberhardt, Problem Girls) whom Gordal has set his sights on, which may be her undoing.

The Return of Dracula, directed by Paul Landres (The Vampire) from Pat Fiedler's script, co-stars Ray Stricklyn (The Lost World), Virginia Vincent (The Hills Have Eyes), John Wengraf (The Pride and the Passion), Gage Clarke (The Bad Seed), Jimmy Baird (The Black Orchid) and Greta Granstedt (They Never Come Back).