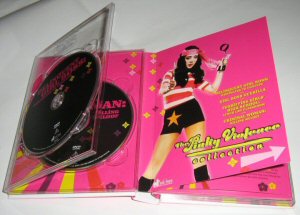 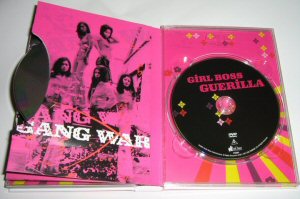 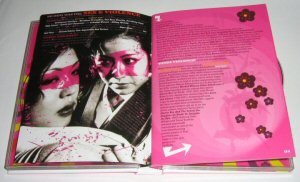 This box set is a must buy. It's limited to 10,000 copies, and two of the films (Killing Melody and Worthless to Confess) are not available individually. Girl Boss Guerilla and Lynch Law Classroom also have separate releases by Panik House. No other company anywhere in the world, including Japan, has bothered to release these fantastic films on dvd. The good news is that there isn't much need for additional releases as the R1 set is nothing short of fantastic. Some of the transfers feature a bit of edge enhancement (most notably Lynch Law Classroom) and there some minor print damange here and there, but each disc rates easily between 4 and 5 on 'out of 5' scale.

The packaging is nice (pink of course) and not too big. It opens like a book and carries 4 dvds, a cd and a 26 page booklet written by Chris D. The booklet is decent but hardly great. Chris D goes though the movies and the series they are a part of (spoiling the endings almost every film) and writes something about the genre’s history. If you’ve read his liner notes on the Panik House dvds then there isn’t much new in this booklet. It’s should still be useful for those not very familiar with the genre and not afraid of spoilers.

The audio cd is called Reiko Ike no miryoku and features 15 tracks of singing and, uhm, moaning by Reiko Ike, apparently recorded in 1971 (not in the mid 70’s like Panik House claims). While some of the content wasn’t exactly to my liking (thanks to the moaning) I found some of the later track pretty good. The opening track also gets better every time I hear it. The ideal way to experince this music would’ve been back in early 70’s alone in a small shabby hotel room in Tokyo in the middle of the night with the lights off. Or that’s at least the image that comes to my head when listening to the cd.

The inclusion of the cd is great of course but there’s some issues. First of all, it was apparently not licensed, and secondly, it was sourced from a cassette tape. Track listing is also nowhere to be found, and the liner notes feature mistakes as mentioned before. Official japanese cd release titled ’Koukotsu no Sekai’ should feature the same content, and should be an improvement on all areas. The liner notes are even in english (as well as in japanese)