< The One Armed Swordsman

In the mid-60's the Shaw Brothers decided that they needed to expand their movie base as up until then the studio was known mainly for making romances and dramas.  Deciding that action was the way to go they went around hiring actors and actresses that could fulfill these needs and one of the first to get the call was an ex water polo champion called Jimmy Wang Yu.  Wang Yu made a few films before The One Armed Swordsman, the movie that was to propel him to superstardom, and went onto appear in well over 80 others in a career that has spanned nearly 5 decades.  He's also had more than his fair share of drunken bar brawls and illicit affairs. The woman who became his first wife was married at the time but there was no need to get a divorce as her husband hung himself when he found out. He has ties to the Triads, which came in handy for a certain Jackie Chan when he was trying to break his contract with Lo Wei (Chan repayed this favour by appearing in Wang Yu's Island Of Fire movie) and...oh yeah...he's been on trial for murder, although the case was later dropped due to "lack of evidence".  Yes folks, Jimmy Wang Yu is a fucking mental. He also happens to be one hell of an actor.   The One Armed Swordsman is one of his best, next to Master of the Flying Guillotine and helped the Shaw Brothers onto the path we know and love today. 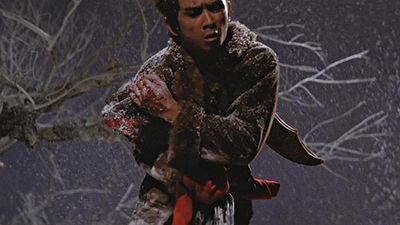 The story starts with an attack on The Golden Sword school by bandits, during which the servant Fang Cheng sacrifices himself to protect his master Qi Ru Feng.  As thanks Ru Feng agrees to take Cheng's son, Feng Kang,as his student.  Growing up into Jimmy Wang Yu, Feng Kang finds himself an outcast as his fellow students look down on him for being poor, so to save his master from any further trouble he decides to leave the school.  This doesn't go according to plan as, while in the process of leaving, he runs into his classmates and his master's spoiled brat of a daughter, Pei Er.  The ensuing fight leaves Fang Keng with only a left arm after Pei Er chops off his right out of spite as she spends every moment up until then trying to get in his pants...woman eh?

Falling off a bridge into the passing boat of peasant girl Xiao Man is the only piece of luck that Feng Kang seems to ever have as she takes him to her home and nurses him back to health. All better but depressed he can no longer slice people up for fun. Xiao Man again comes to his aid by giving him an old tattered book she inherited from her parents that teaches him how to fight one-armed style.  We can rebuild him, we have the technology, he will be stronger, faster, better.

As Qi Ru Feng busy's himself with the plans for his 55th birthday, inviting all of his students so he can name a successor, his old enemies The Long-Armed Devil and the Smiling Tiger Cheng (martial arts villans always have the coolest names) are preparing to gate crash the whole shebang and slaughter everyone they come across.  Learning of their plot, Feng Kang rushes to aid his master.  Will he succeed?  What do you think?

The One Armed Swordsman made the career's of Jimmy Wang Yu and director Chang Cheh, it is also extremely violent, full of anti-heroes and doesn't skimp on the blood letting.  Even the love story between Xiao Man and Feng Kang is handled with a certain believability that you rarely find in Martial Arts movies.  Add to that the fact that, as we've established, Jimmy Wang Yu is a fucking mental yet brilliant actor and you've got one of the best movies in the Shaw Brothers catalogue.  So do you yourself a favour and grab a copy of The One Armed Swordsman, I promise you that you won't be disappointed.

Neil Gray is a writer from the UK. The story goes that he was invented in a laboratory experiment that went horribly wrong and has spent years devouring every movie form and film genre that was foolish enough to pass his way until he is now nothing more than a hideous monstrosity, more celluloid than man.
Retrieved from "https://www.grindhousedatabase.com/index.php?title=The_One_Armed_Swordsman/Review&oldid=159211"
Category: