< The Notorious Daughter of Fanny Hill 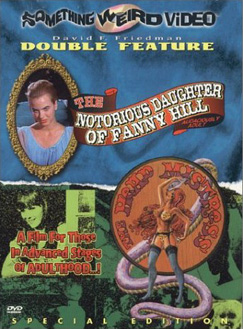 The Notorious Daughter of Fanny Hill is presented in the full frame format and looks quite good considering its age. Not only are we given this film, but it has also been paired on the disc with another Friedman "literary" classic, The Head Mistress, and contains a wealth of extra features. These features include the original trailer for this film, as well as trailers for seven other Friedman films with great titles like The Fabulous Bastard From Chicago and Fanny Hill Meets Dr. Erotico. Strangely, there are three trailers for Fanny Hill films, each one featuring the amorous woman in vastly different time periods. How this feat is accomplished, I have no clue, but it is certainly an interesting achievement.

There is also an excerpt from A Taste of Honey (called Stacey Walker, Dreamgirl), the short feature Walker made for Friedman (humorously titled But Charlie, I Never Played Volleyball!), a gallery of still frame art (that has some great rare radio spots playing over them), and an extra that would only be of interest to cult film fans like me: a five minute video clip showing Something Weird owner Mike Vraney and some of his pals getting to raid David F. Friedmanís film vault for all of the myriad treasures within. I really enjoyed this particular extra, as I could only imagine the excitement of Vraney and Co. getting to rummage through all of those great exploitation films and advertising materials.

Also on the disc is a fine commentary track by Mike Vraney and David F. Friedman. Friedman is pretty much the king of commentary tracks and Vraney himself even states at the end of the track that after they have finished converting all of Friedmanís films over to DVD, he will have recorded the most commentary tracks of any filmmaker ever (a record that he has most certainly broken and likely will never be attained again). Friedman is his usual informative self and gives a great deal of insight into how he selects his new starlets, including the understatedly beautiful Stacey Walker. There are absolutely no dead areas, and somehow, Vraney manages to keep the conversation fresh despite the fact that they have done a million of these things.

The Head Mistress is presented in the full frame format and looks quite good considering its age. Not only are we given this film, but it has also been paired on the disc with another Friedman "literary" classic, The Notorious Daughter of Fanny Hill, and contains a wealth of extra features. These features include the original trailer for this film and its co-feature, along with some other really funny trailers for Friedman projects. The funniest trailer on the disc, though, is for a film called The Lustful Turk, which interrupts itself to show how accidents can sometimes happen on the set of a film (an accident which just ends up being an actor whipping a girlís bottom, prompting her to laconically say "Hey, man. That hurt.").

Also on the disc is a fine commentary track by Mike Vraney and David F. Friedman. The commentary is great, but Friedman mentions an actor in one scene who is "popular nowadays" who probably wants to keep his identity in this film unrevealed, and I really couldnít tell who it was. Though this mention occurs late in the track, discovering the actorís identity became more important than anything else that was said afterwards (I still havenít figured out who he is, either). Other than this mention, Friedman knows a great deal of information about the film and never seems to get repetitive despite the fact that this is likely close to his thirtieth track. Excellent stuff for a excellent DVD.