The Nine Lives of Fritz The Cat/BluRay

< The Nine Lives of Fritz The Cat

"That infamous cat and his twisted life are back! Staying within the tradition set by the audacious and racy Fritz the Cat, director/co-writer Robert Taylor takes R. Crumb’s way-cool feline character from the boundary-pushing ’60s to the harsh realities of Vietnam, racial riots and Watergate of the ’70s in a sequel ripe with “pure silliness [and a] hip story-telling style” (Variety)! Fritz has got the post-college blues—he’s married to a mouthy wife who berates him constantly, and he’s out of work and on unemployment! To escape his sad, nagging reality, Fritz launches himself into a psychedelic haze with a mind-blowing catnip that takes him to his eight other lives. There, he lives out fantasies as an out-of-this-world astronaut, an aide to President Kissinger and worse—an orderly to Hitler! But as his star-crossed hallucinations put him on a collision course with reality, Fritz becomes a casualty just waiting to happen! (Kino Lorber) 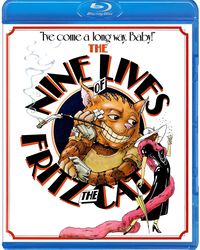