This movie is subject to a nationwide confiscation ban according to Paragraph 131 criminal code in Germany (the jurisdiction this website falls under), as such the following article, directed primarily at our international readership, serves as a critical and historic assessment of this film in the context of our mission to educate and inform.

A serial killer is wreaking havoc on young girls all over New York City. He slashes, stabs or brutally mutilates them without a seeming pattern. While the killer leaves traces in the form of obscene phone calls in a duck voice, the head investigator Lt. Fred Williams (Jack Hedley) teams of with a psychologist, Dr. Paul Davis (Paolo Malco) to make sense of the killer. When a girl, Fay (Almanta Suska) manages to escape the killer, the investigators are circling in on a local pervert with two missing fingers. But Davis is not convinced that's the killer, he imagines someone smarter behind the creepy phone calls in the duck voice....

With his 1982 slasher oevre, a pinnacle of sleaze, Fulci comes almost full circle. Not only is this almost a prototypical (albeit somewhat later day) grindhouse film, it also finds its settings in the grindhouses of 42nd street and some of the "characters" one might find there, or at least from a cliche standpoint. It is thus quite a meta grindhouse movie. Riding on the success of some of his other work, and a wave of slasher films that gained popularity, this one sets somewhat in between his earlier gialli and his later mystery films as an entry that is most definitely super gory and also rather heavy on the pervert scale.

The New York Ripper is neither your typical giallo, nor your typical slasher film, and it's als not a cop movie. The film has no real central character (it's not the cop), it's way to explicit and in-your-face for a giallo and too creepy-pervy for a slasher flick. It's a stylish, but not overly stylized, extremely savage slasher that boasts some of the most gruesome killings you see in the genre. At the same time, it has very little actual shock or scare moments, it's not atmospheric enough or surprising enough to really put you at the edge of your seat. Fulci plays with the audience, and forces it to voyeuristically enjoy the sadism and wickedness of its killer protagonist, in a way. Back then it caused quite a stir, partially with critics, but also with censors and ratings boards. It got banned in in the UK for a longer time, and to this day it's banned and confiscated based on the criminal code in Germany (for depiction of sadistic and dehumanizing violence etc.).

The score by Francesco de Masi isn't one of his best or most memorable, but it's an okay job and underscoring the off-beat atmosphere. Working with Fulci here is Luigi Kuveiller who also shot A Lizard In A Woman's Skin, Deep Red, the spaghetti western Sledge and honestly a shitload of other movies, that man was really busy, and also Vincenzo Tomassi who edited Murder Rock and The Beyond. We'd see Malco later on in The House by the Cemetery, and Hedley was mostly a TV actor who had earlier appeared in a Bond movie. All in all the film is quite full of talent, but, to insert just a tad of my personal opinion, I didn't dig the film too much, to me it's not an artistically outstanding effort and even compared to Fulci's own work, it seems a lesser effort, creatively speaking. It's too conventional, aside from the gore, and not nearly as artsy as some comparable works of the genre. Yes, it's a must see, it's reputation properly exceeds its own merits, and it offers all kinds of goods for the gore and nudity hounds, but I found it to be alright, not great.

The BluRay (reviewing the latest release, but not the 4K UHD disc) is in all respects an excellent release. The new scan offers remarkable detail and sharpness, aside from minor contrast weakness in darker scenes, this transfer looks about as good as anyone could possibly imagine a movie to look like that was shot in '81. It's a knock-out. The sound is also very solid (I chose the 7.1 upmix, listening on a 5.1 system that I have), clear and dynamic, but offers little in the way of surround experience. There are a few other language choices and that goes for both the newer and the previous release, namely Italian, French and Spanish. For subtitles see below.

Extras that are on both this, and also the previous 3-disc release, are: 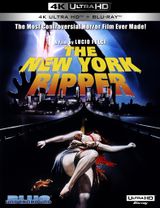 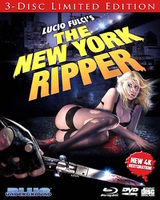 Thanks to Blue Underground for providing a copy of the BluRay. Screenshots used here courtesy of BluRay.com and are both from this new but also from the older releases