Overflowing with relentless gore and irony-free Reagan-era cheese, The Mutilator is definitely a product of its time. Fortunately, it’s a relatively watchable 80s relic, adding a hint of southern flair and an uncommonly high amount of grue to the tried and true slasher recipe. That’s not to say that it doesn’t liberally sample from its predecessors (specifically the Friday The 13th Series), but it has enough legitimate moments of shock to make it a fun late-night splatter fest.

It also boasts some of the most vicious and explicit murder sequences ever filmed. From the word "go," we’re treated to a triple take of a shotgun blast through a woman’s chest. When something like that happens in the opening seconds, it's not hard to realize where the filmmakers' sentiments lie. However, it's these same moments of unmitigated violence that keep the whole operation afloat, especially since the performances are bottom of the barrel and the storyline is borderline non-existent.

The aforementioned shooting is an accident caused by a child who takes it upon himself to keep his father's gun collection clean (shouldn’t somebody be watching this little rascal?). While shining a pretty substantial shotgun, he aims the weapon at the wall, mistakenly pulling the trigger and gunning down his mother in the adjacent room. When daddy gets home and finds his beloved wife's corpse sprawled on the kitchen floor, he drags the lifeless body into his den to have one last drink with his bride. If that description sounds creepy, wait 'til you actually see it. This is a pretty disquieting moment, made even more effective by the poor lighting and low-budget ambiance. Disturbingly, the misanthropy doesn't just end there. It's evident in every moment of this feature. 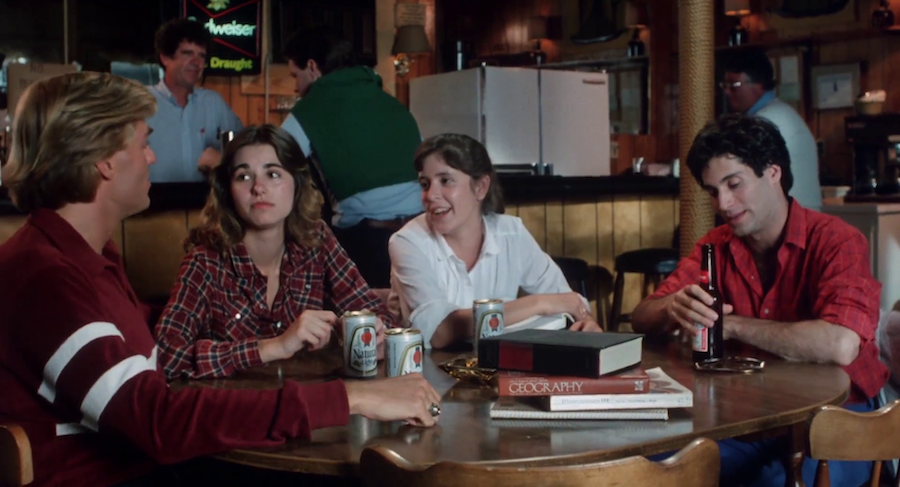 Flash forward about 10 years to Any College, USA. Our unfortunate little trooper from the bleak opening is leading a pretty normal life away from his alcoholic/depressive father. Looking for one last hurrah before winter sets in, he and a group of pals (the goofball, jock, and slut all in tow) decide to close up his father's beach house during their listless fall break. Unfortunately for them, their relaxing vacation goes sour when daddy grabs a few hunting accessories and goes out looking for revenge.

This hunting trip is no laughing matter. Pops keeps a battle axe on hand for such occasions and isn't afraid to get his hands dirty. As for the brutal slayings I promised you, we're treated to the opening shooting, a slo-mo drowning, chainsaw to the mid-section/decapitation, pipe through the face, pitchfork to throat (rivaling a similar sequence in The Prowler), fishing gaff to the vagina (a total "WTF" moment), and a grand finale that is so unabashedly insane that it has to be seen to be believed.

As for scares, over use of F13-style POV shots and muffled heavy breathing drain what little suspense was on hand for the stalking sequences. Yet, the blood shed and cornball attitude are the draw for this type of flick. If viewed, I recommend planting your tongue firmly in cheek and giving your conscience a smoke break.