Made at a time when the Italian giallo had yet to fully evolve into its contemporary urban mode Elio Scardamaglia’s ‘The Murder Clinic’ displays many of the genres established tropes (the killer’s black leather gloves, the fetishised murders, the inordinate list of suspects) but set against a stylised Gothic backdrop akin to Antonio Margheriti’s Castle of Blood and Riccardo Freda’s ‘The Horrible Dr. Hichcock’. 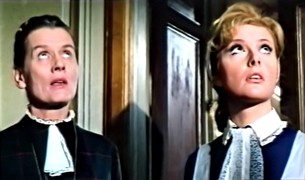 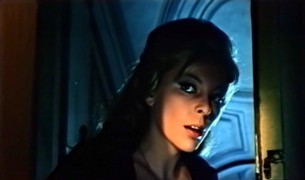 A black hooded phantom prowls the corridors of a 19th Century psychiatric hospital brandishing a straight razor. The figure steals into the bedroom of a young female patient and after a moonlit chase through the clinic’s garden succeeds in murdering the girl.

The next morning the head of the clinic Dr. Vance tells young nurse Mary that the girl was collected by her parents and taken home and his frosty housekeeper corroborates his story. Mary is given a tour of her new place of employment and is introduced to a few of its loopy residents. These include an intense young man named Fred who becomes violent when he hears footsteps echoing from the floor above his room. Fred rants and drools and calls Vance a ‘murderer’ when the Doc attempts to sedate him. Secreted away on the third floor of the building, where only Vance is allowed to venture, is a mysterious figure who wears a black cape. 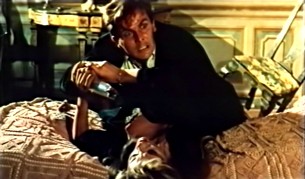 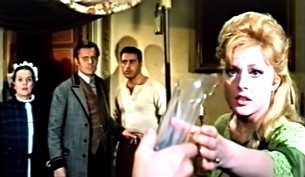 Into this melange of maniacs and medicos comes Giselle, a tempestuous young woman being shanghaied for an unspecified transgression. Hoping to escape she knocks her escort unconscious but is then stranded in the forest when the horses pulling her carriage charge off crushing the poor fellow under the vehicle’s wheels. Stumbling through the trees she secretly spies Dr. Vance digging a grave for the body of his murdered patient. Finding Giselle unconscious in the woods the next morning randy Vance squeezes her breast and re-assures her: ‘Don’t worry, I’m a Doctor’. Taking her back to the clinic the Doc introduces her to his wife Elizabeth who is initially hospitable but once alone with her husband begs him to send Giselle away. She accuses him of being both an adulterer and a murderer. ‘I saved you once at that trial’ she reminds him. ‘What happened to Laura was an accident’, Vance insists. It seems that Elizabeth’s sister died falling from a scaffold when the clinic was under construction. Vance was accused of pushing her and was only found not guilty because of Elizabeth’s testimony.

Meanwhile Giselle too has heard the mysterious footsteps upstairs but while nosing around she is pounced upon by the schizophrenic Fred who is only placated by the intervention of kind hearted nurse Mary. Locked in a cell to avoid further aggravated assaults Fred begs to be put out of his misery before he hurts anyone else. Undeterred Giselle resumes her snooping and creeps up to the third floor where she is shocked to discover the Doctor’s hideously scarred special guest. 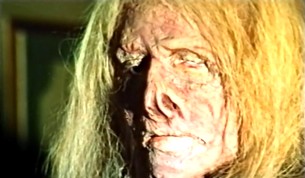 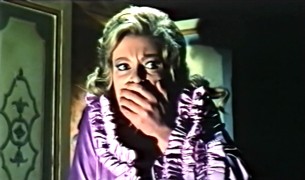 Revealing that she saw him burying the girl’s corpse Giselle demands that Vance pay her £50,000 to keep quiet. ‘Take my advice; get out of here . . . quickly’, whispers the Doc’s housekeeper to the girl. Later that night leather gloved hands unlock frantic Fred’s cell and Giselle is assaulted by a black caped figure waving . . . you guessed it, a straight razor!!! Who is the phantom slasher? The psychotic, but strangely loveable, Fred? The hideous hag in the attic? Or maybe the philandering Dr. Vance himself? There’s no shortage of suspects and there will be a few more corpses littering the clinic’s corridors before the fiend’s identity is ultimately revealed.

‘The Murder Clinic’ is an enjoyable fusion of giallo whodunit and ‘old dark house’ style melodrama. The traditional elements of Gothic literature are in satisfying abundance; a labyrinth of candlelit corridors in the mansion of madness harbour guilty secrets, repressed desires and a mad disfigured relative hidden in the attic. One comical contrivance is the sheer volume of straight razors lying about the place; almost every character appears to own one in order that each might be considered a possible murder suspect. Needless to say no-one in this movie has a beard. 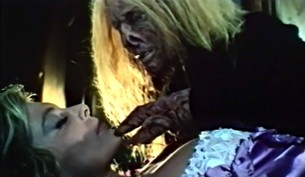 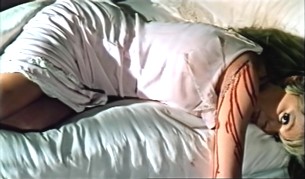 The convoluted plot, courtesy of prolific screenwriter Ernesto Gastaldi and equally prolific producer Luciano Martino, though hardly original, is intriguing and is in one respect singularly untraditional. Initially the film suggests that nurse Mary will be the central protagonist but this focus temporarily shifts to Giselle before shifting back to Mary for the closing scenes. Mary is clearly the film’s heroine but when she is forbidden from investigating the noises emanating from the third floor she does what she is told. In this respect she is unable to defy the patriarchal dominance that Dr Vance has over the women in the institution (Ivan, the Doctor’s macho manservant, is similarly feminised and expresses resentment over his emasculation through an affair with one of the other nurses). With her introduction to the cast the delinquent Giselle takes charge of the investigative drive of the narrative and explores the darker recesses of the clinic’s history via the rooms that the Doc has (a la Bluebeard) forbidden entry to. This shift of focus suggests that the Doc’s guilty secret can only be uncovered by someone with a guilty secret of their own and is an unexpectedly sophisticated narrative device. That Giselle is ultimately punished for her transgression is less of a surprise.

In the early 1970’s ‘The Murder Clinic’ played U.S drive-ins and grindhouses as part of an ‘Orgy of the Living Dead’ triple-bill – this awesome all-night horrorthon was advertised by a trailer which featured a guy in a straightjacket who had apparently been driven out of his mind by the shocking images he had witnessed. This exploitable gimmick extended to a newspaper ad campaign designed by Alan Ormsby (writer/star of Children Shouldn’t Play with Dead Things) which promised free psychiatric care to any audience member whose sanity was damaged as a result of exposure to such extremes of cinematic horror. For its place in this trilogy of terror the film was given the obfuscating title of ‘Revenge of The Living Dead’. Its co-features were ‘Curse of The Living Dead’ (in fact Mario Bava’s brilliant Kill Baby Kill) and ‘Fangs of The Living Dead’ (a vampire fantasy directed by Amando De Ossorio better known as ‘Malenka’).