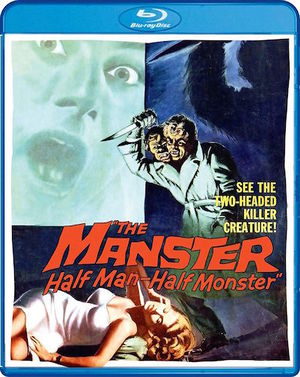 Synopsis: An American reporter in Japan becomes the unwitting guinea pig in the experiments of a research scientist in this tale of ambition gone berserk.

Larry Stanford assigned to a story on evolutionary theorist Dr. Suzuki visits his secluded laboratory high in the mountains for Japan. Unwittingly injected with an experimental drug, Stanford becomes increasingly bitter and irritable towards his boss and his wife. Then one day, the appearance of a third eye on his shoulder hurls the reporter into a state of terror. The eye soon develops into a second head setting in motion a rampage of mayhem, madness and murder.

The Manster a.k.a. The Split was originally released as the second half of a double feature. The first film was a dubbed version of Georges Franju's horror classic Eyes Without a Face (re-tittled The Horror Chamber of Dr. Faustus).