The Last of The Secret Agents?

The Last of The Secret Agents? (1966, USA) is a Spy-Comedy film directed by Norman Abbott. 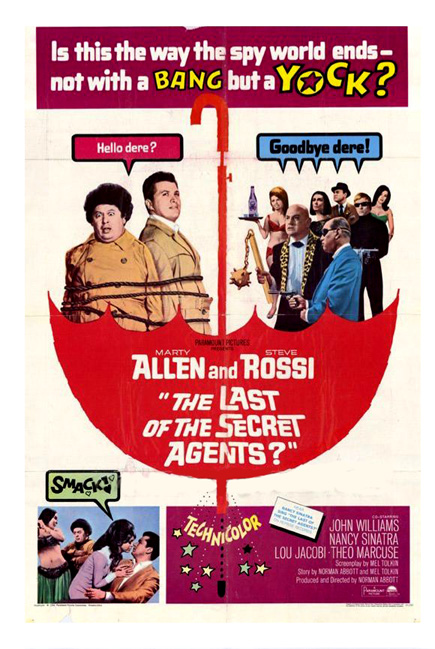 Two Americans in Paris (Allen & Rossi) are reluctantly recruited by the Good Guys Institute (GGI) led by J. Frederick Duval (John Williams) to thwart the plans of the evil crime and espionage organisation THEM led by Zoltan Schubach (Theo Marcuse). THEM has plans to steal priceless international art treasures, most notably the Venus de Milo. In addition to the then popular spy film genre, the film spoofs many other items of the day such as cigarette commercials. Allen & Rossi were a popular comedy team in their nightclub and television appearances, notably on The Ed Sullivan Show. Paramount Pictures had highly successful comedy teams of Bob Hope and Bing Crosby in the 1940s and Dean Martin and Jerry Lewis in the 1950s and no doubt wished to recreate their success with the duo's screen debut in the film. (Wikipedia)