Combining a plot already familiar from The Creeping Unknown and ‘First Man Into Space’ with some superbly slippery special effects courtesy of soon-to-be Oscar winner Rick Baker, 1977’s sci-fi splat-fest ‘The Incredible Melting Man’ is that rare breed of exploitation movie whose visual excesses actually deliver on the promise of its hyperbolic, exclamatory title. You better grab some Kleenex as this is gonna get messy! 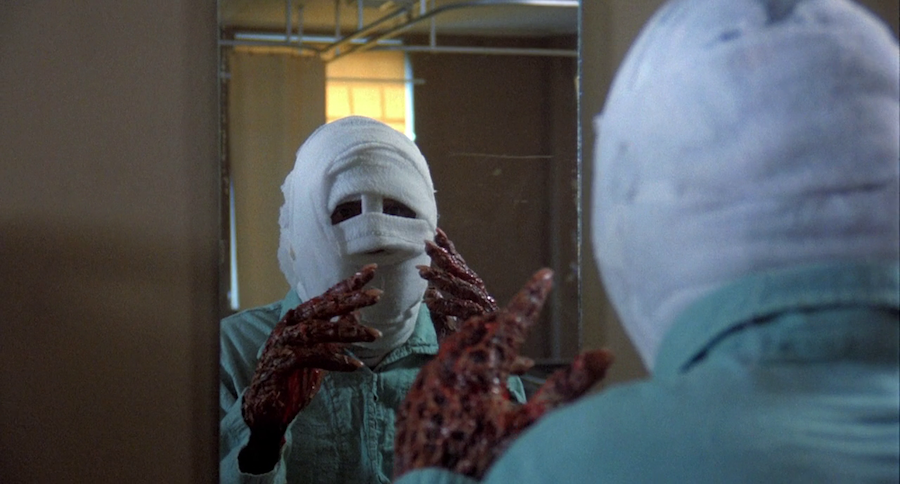 A trio of astronauts, who have obviously never read a ‘Fantastic Four’ comic book, are floating around the rings of Saturn when a solar flare bathes their rocket ship in some kind of cosmic radiation. Only one of them, Steve, survives and wakes up in a hospital back on earth wrapped in more bandages than the Invisible Man. His hands are horribly scaly and scarred and when he tears the gauze off his head he screams at the sight of his own reflection; his face looks like three week old Kentucky Fried Chicken. The dude goes crazy and chases after a nurse who runs down a long corridor in painfully slow motion before crashing straight through a glass door.

Steve’s friend, and doctor, Ted Nelson examines the nurses partially devoured face and deduces that not only is his buddy now partial to snacking on human flesh but that he’s also radioactive. He gets on the phone to old school military blow-hard General Perry who is busy eating a grapefruit and explains that their patient has escaped. Ted speculates that Steve’s mind is ‘completely decomposed’ and that ‘his instinct will tell him to kill’.

Meanwhile Steve is staggering about the countryside making noises like Darth Vader. He disturbs a guy who is fishing, yanks his head off and throws it in a river. It floats away in slooooow motion. Some kids discover Steve behind a tree during a game of hide & seek and one little girl runs home to her mother screaming ‘It’s Frankenstein!’ 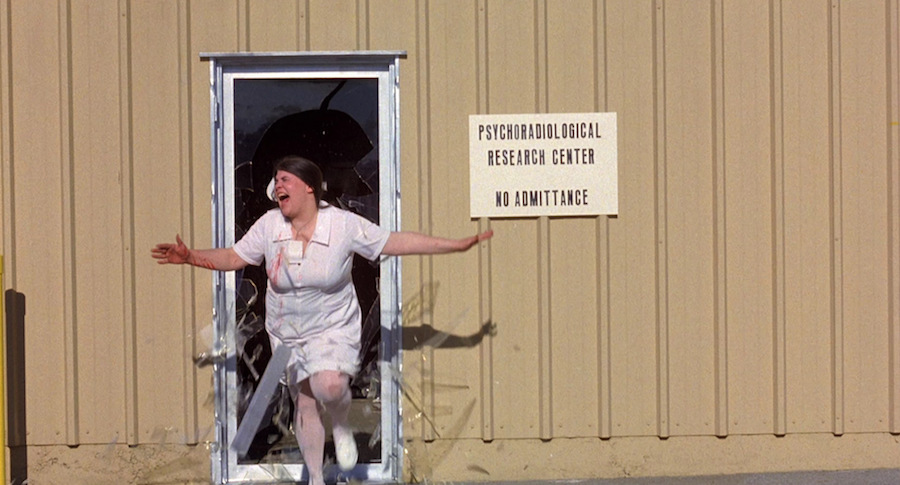 Ted makes a pathetic attempt at keeping the gruesome details of his friend’s predicament secret from his pregnant wife Judy. ‘Steve escaped’, he tells her as she’s putting away some groceries. ‘Oh God, what are you going to do?’ she asks to which her husband replies: ‘Did you get some crackers?’ Smooth move dude, that’ll throw the little woman off the scent!

Ted wanders around outside waving a Geiger counter and yelling ‘Steve, I want to help you’ before discovering some gloopy crud dangling from a bush and stuttering out what is surely one of the most awesome lines of dialogue in the history of horror cinema: ‘Oh God . . . it’s his ear’. Presumably Steve will no longer be able to hear Ted yelling his name.

General Perry arrives to help Ted in his search for the slippery spaceman just as the fisherman’s hollowed out torso is discovered by the local sheriff. By this point Steve’s really not looking too great but there is a steady supply of victims ready, if not exactly willing, to donate flesh and blood to a worthy cause. Ted needs to stop worrying about those crackers and get the lead out if he’s going to catch up with his friend before he falls apart completely. Pretty soon that Geiger counter is going to be redundant, perhaps Ted would be better off investing in a mop and a bucket. 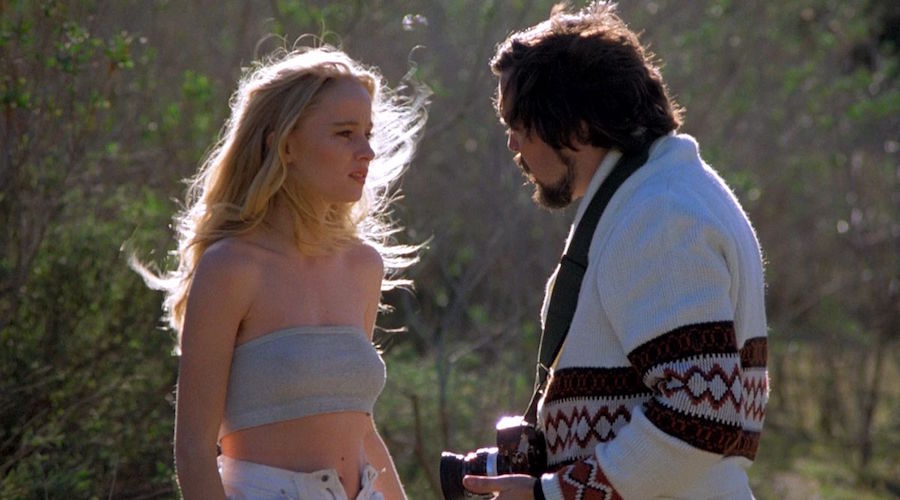 OK, so the film’s plot is derivative and nonsensical and mostly presented in a flat TV movie style but so what? When a flick is called ‘The Incredible Melting Man’ all I care about is seeing a man melting in an incredible fashion and Rick Baker’s viscous, syrupy effects are fabulous; putrid slime oozes and slides over Steve’s increasingly exposed skull in rivulets of red, brown and yellow making the film’s steadily dissolving anti-hero one of the coolest looking movie monsters ever to slop across the screen.

I would like to say a big ‘Fuck You’ to all the snobby critics, amateur and professional, who like to give the Melting Man a hard time and poke fun at his disability. There is a genuine melancholy quality to the scenes of the grounded astronaut stumbling around the countryside as the sun sets, the final transmissions of Ground Control echoing in his head. We know that Steve is doomed from the very start, this is no spoiler. There’s no chance that he’s going to reconstitute especially once bits and pieces start dropping off!

I can’t help but wonder what David Cronenberg might have made of the Melting Man had he tackled the film’s grotesque scenario of bodily disintegration. Unlike the Seth Brundle character at the centre of Cronenberg’s re-make of ‘The Fly’ astronaut Steve is not transforming into a new type of life-form, he is devolving into a puddle. Despite his apparently ‘decomposed’ brain he’s tragically, horrifically, conscious of what is happening to him. His reaction to his own reflection, at two points during the film, is one of absolute self-disgust and panic. Under Cronenberg’s pen the script would no doubt have made more of the potential for Kafka-esque satire inherent in the idea of some-body melting away to nothing however we are told absolutely nothing about the life of astronaut Steve before his accident so his fate appears entirely abstract. 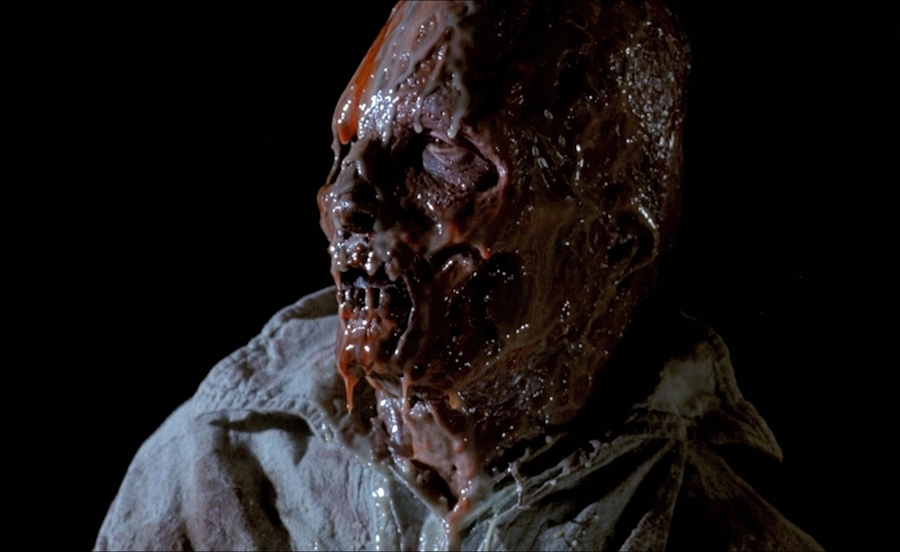 There is one unexpected final act twist which lends the film that ironic Romero-esque nihilism that characterises so many American horror films of the 1970s and the Melting Man’s ultimate soupy demise is as pathetic and pitiful as it is gruesome and gross.

Director William Sachs cranked out a few more or less entertaining exploitation titles such as sci-fi spoof Galaxina and teen cruiser flick Van Nuys Blvd. however both suffer, in my opinion, from a definite lack of melting men, incredible or otherwise.