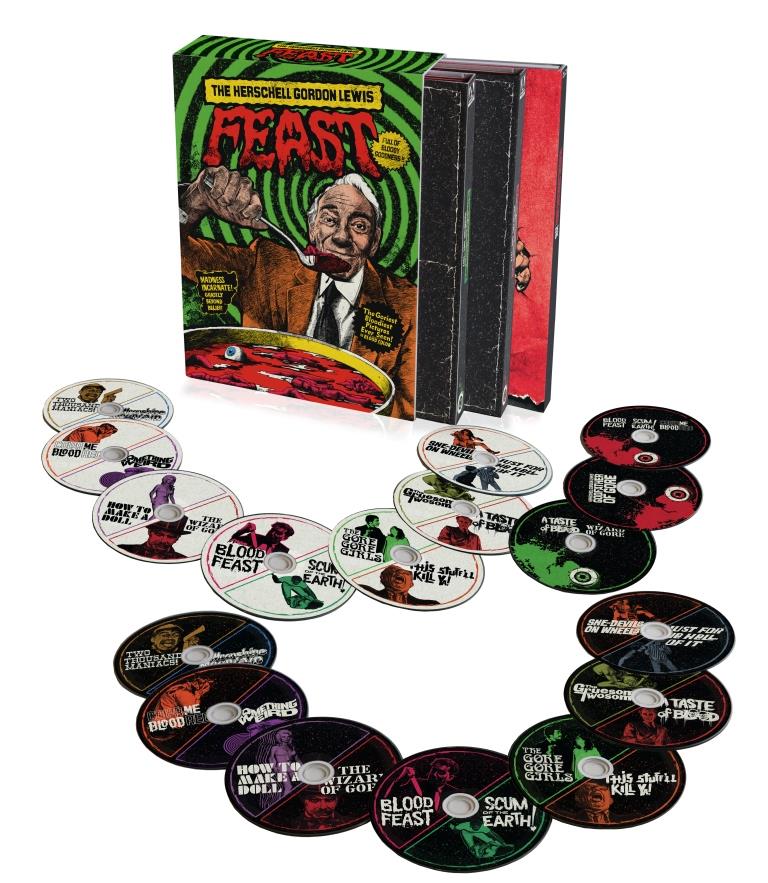 In 1963, director Herschell Gordon Lewis pulled a cow’s tongue out of an actress’ mouth on camera, and in doing so, changed the landscape of horror cinema forever. That sequence was just one of numerous gruesome gags featured in Blood Feast, the film credited as being the world’s first gore movie. It’s no exaggeration to say that the modern gross-out movies of today owe their very existence to the pioneering efforts of H.G. Lewis.

But whilst Lewis is most widely celebrated for his blood-and-guts epics (Two Thousand Maniacs!, The Wizard of Gore et al.), there’s more to the prolific director than mere splatter. The filmography of H.G. Lewis reads like a veritable wish-list of exploitation movie madness: tales of sordid photographers (Scum of the Earth), sex robots (How to Make a Doll), biker girl-gangs (She-Devils on Wheels), youths-run-amok (Just for the Hell of It), psychic witches (Something Weird) and hard liquor-loving hillbillies (Moonshine Mountain).

Now, for the first time ever, Arrow Video is proud to present fourteen of the Godfather of Gore’s most essential films (including nine Blu-ray world debuts), collected together at last and packed full of eye-popping bonus content. So put your feet up, pour yourself a glass of good ol’ moonshine, and prepare yourself for a feast – H.G. Lewis style!

• Brand new introduction to the films by director Herschell Gordon Lewis • Audio Commentary on Blood Feast with Lewis and producer David F. Friedman • Audio Commentary on Scum of the Earth by Friedman • Blood Feast Outtakes • Blood Perceptions – filmmakers Nicholas McCarthy (The Pact) and Rodney Ascher (Room 237) offer their insight on Blood Feast and the importance of Herschell Gordon Lewis • Herschell’s History – archival interview in which Lewis discusses his entry into the film industry including Scum of the Earth • How Herschell Found His Nitch – Lewis discusses more of his early work in nudie cuties and the making of The Adventures of Lucky Pierre • Archival Interview with Herschell Gordon Lewis and David F. Friedman from 1987 • Carving Magic (1959) – vintage short featuring Blood Feast’s Bill Kerwin • Blood Feast Radio Spot and Trailer