The Haunted World Of Mario Bava 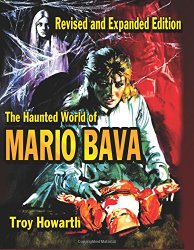 In the late 1950s, Mario Bava helped to create and define the Italian horror film. His classic directorial works of the 1960s and 1970s, including Black Sunday, Kill Baby Kill and Lisa and The Devil, remain among the most colorful and imaginative in the history of the genre. Bava’s films are rife with unforgettable images—Barbara Steele’s uncanny beauty being brutally violated in Black Sunday, Christopher Lee returning from the grave marked by his bloody demise in The Whip and the Body, the angelic-looking ghost child of Kill, Baby … Kill!, the brutal murder scenes of Blood and Black Lace and Twitch Of The Death Nerve—but they are also thematically rich and inter-connected. For many critics, Bava was a gifted stylist but few have bothered to look beneath the surface to uncover the deeper significance of his work.

The Haunted World of Mario Bava was first published in 2002. It has now been updated, revised and expanded by author Troy Howarth to give a better overview of Bava’s remarkable legacy as a director and “cinema magician.” This new edition contains new contributions from Bava’s son, director Lamberto Bava, and genre icon Barbara Steele. The book examines all of Bava’s directorial works in detail while also providing a portrait of the man himself—a man for whom publicity and self-promotion was always shied away from, even as he continued to work himself to the point of exhaustion as he improvised and pushed himself to deliver films which would go on to influence such major filmmakers as William Friedkin, Martin Scorsese, Quentin Tarantino, Tim Burton and Joe Dante. Author Troy Howarth “discovered” Bava’s work as a child on late night TV and has worked hard to help bring more serious attention to his films. In addition to holding down a full-time job in the field of social work, he is also a contributor to We Belong Dead magazine and writes reviews for such websites as AV Maniacs and Eccentric Cinema.