< The Harder They Come

Director/Producer Perry Henzell created one of the most popular films to come out of Jamaica. The Harder They Come was a triumph for the Jamaican culture and it gave an honest look at life within the ghettos of that part of the world. It also became a legendary cult film.

Ivan (Jimmy Cliff) is a country boy looking for fame and fortune in the big city of Kingston, Jamaica. He has dreams of becoming a star on the new reggae scene. When Ivan gets to town, he finds out things wont be as easy as he expected. Ivan visits his mother and she explains that even though he has good intentions he's headed for a rough road ahead. While looking around town, Ivan meets a local player named Pedro and they get to talking. Pedro sees that Ivan is just a dumb country boy, but after Ivan explains he's a reggae singer, Pedro tells him he'll try to help him out. Ivan and Pedro and some others goto see a movie. You'll notice that the movie they are watching in the theater is a classic spaghetti western called Django (1966). The clip shown is when Django is facing off with the red hooded bandits. Ivan and the others are hooting and hollering at Django on the screen. They go crazy when watching this anti-hero blast away with his Gatling gun.

Ivan needs a job, so he walks the streets trying to find work, but he's turned down by everyone. He finally finds a job working for a local preacher as a mechanic. The Preacher is a very serious man and he has strong convictions. Ivan meets one of The Preacher's adopted daughters and he asks her to go out with him. She is very religious as well and she and Ivan have a hard time because The Preacher is overprotective. They get to know each other and we see them riding along the oceanside in the sunset, its a really beautifully shot sequence. The Preacher then accuses his daughter of fornicating with Ivan and she cries out that it's not true. In a great scene, we see that she is thinking of making love to Ivan while she's in a church service.

Ivan gets a chance to a record a song. Its called "The Harder They Fall" and it serves as his anthem throughout the film. Ivan finds out that selling his song will not gain him a lot of money. This is where the film really shows the struggles of the real life reggae artists at the time. They didnt make much money at all for their songs and Ivan is offered only twenty dollars. Ivan is disallusioned by this, but he still manages to get off on the popularity of the song when it plays at local dancehall clubs. 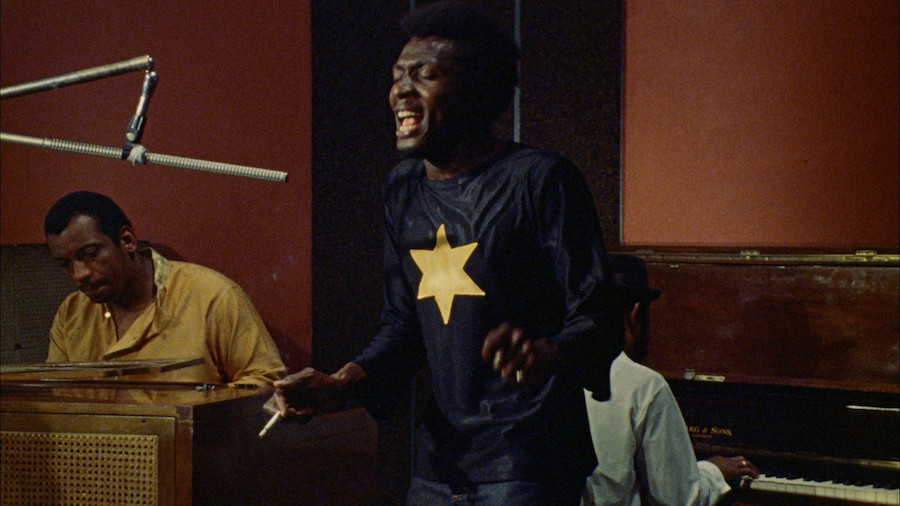 Ivan comes to his girlfriend's window one night and explains that she has to choose who she wants to live with, him or The Preacher. Ivan's goal is to make it as a reggae star and he doesn't want The Preacher or anyone else telling him what to do. Ivan comes to work the next day and finds that he has lost his job. His co worker tells him to leave, but in defiance, Ivan violently stabs him and blood flies everywhere. Ivan is picked up by the police and brought to jail and whipped. When Ivan gets out, he has a new goal, to stay outside the law and not get caught no matter the cost.

Ivan knows he won't get to make much money with his music, so he decides to turn to a life of crime. He becomes a drug dealer and a dangerous killer. One night we see Ivan is making love with a woman and the police close in on him. Ivan shoots a whole group of police, but he also gets shot himself. Ivan is wounded but he gets back at anyone whos informs on him and he becomes a sort of modern folk hero around Kingston. This part of the film was based on a real person also named Ivan. Throughout the film you will see graffiti on the walls that are a reference to the real Ivan as well.

In the big climax, Pedro explains to Ivan that he has to leave Jamaica or else he'll be killed. So he sets up an escape. Ivan must swim out to a freighter and hitch a ride to Cuba. When Ivan swims out to catch the freighter, he doesn't make it and the freighter passes him by. Ivan swims back to shore. Meanwhile, the Kingston police are looking for him in a police boat. When Ivan gets back to the shore, hes exhausted and the police arent far behind. Ivan hides in the trees not far from shore and when the police track him down and surround him, he comes out with guns in both hands. As Ivan makes his final stand, the film crosscuts with flashback scenes from when Ivan was watching Django and the movie audience was screaming in excitement. Tragically, Ivan, the countryboy turned rebellious local hero is gunned down. Real life isn't a movie after all.

The Harder They Come shows the struggle of the Jamaican people and it also mirrors the hardship of many third world cultures in general. It was filmed with a raw artistic/realistic style and it remains one of the best films of the 1970s. Its a must see for any film lover. Irie!