After going on hiatus with his popular gore films and focusing more on diverse genres, director Herschell Gordon Lewis returned back in full for The Gruesome Twosome. This time, however, there wouldn't be a singular madman held accountable for for the blood-filled, slasher-spree for this tale. Instead, it would involve a mother and son! Mrs. Pringle (Elizabeth Davis) runs a popular wig shop (fittingly called "The Little Wig Shop") who's selection of wigs tends to be most popular and desired in the area. But this being a Herschell Gordon Lewis film, the wigs look good for a reason. That's because these wigs are the real deal! Freshly scalped off of poor innocent young girls. The deranged son of Mrs. Pringle, Rodney (Chris Martell) is the one who gets his hands dirty in providing these "wigs" for his mama. Noticing that some of her college have gone missing, Kathy Baker (Gretchen Wells) will pull out her "Hardy Boys" books to try to figure where her gal pals have disappeared to. Pray she doesn't end up in the clutches of The Gruesome Twosome! 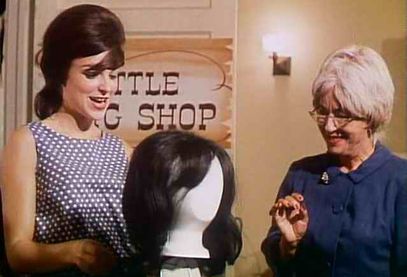 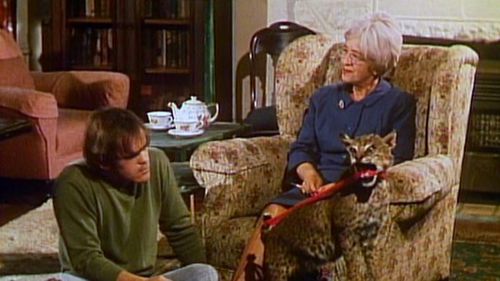 To begin with, The Gruesome Twosome could have become a perfect classic of it's kind---That is, only if it was allowed to survive as the short-film it originally was. You see, in order to have a respectable run at Drive-Ins or theaters, it was mandatory by this time for films to exceed the 60-minute mark. But the first cut of of this film came up a little short of the running time and some re-shooting was demanded. Some of the filler that was added turned out to be bad. The padding includes some odd close-up footage of the mouths of an anonymous man (later revealed by Lewis to be Ray Sager! The Wizard of Gore himself!) devouring a platter of food. This footage was meant to be what group of Drive-In goers are supposed to be watching on the screen. But the other filler turns out to be brilliant! It appears in the opening scene where two doll heads indulge in a conversation about the movie that we, viewers, are about to see! Lewis has said himself that he wasn't proud about these additions he was forced to make. But, surely, there have been worse examples than this. And what remains of the movie still endures as one of the more better of Lewis' gore films. It's a shame that Mrs. Pringle and Rodney aren't more celebrated in the horror realm because Elizabeth Davis and Rodney Martell are one of the more memorable duos to be found in slasher lore with Davis pulling off a flawless, warm and nutty performance. And Martell (though not given much as far as clear dialogue goes) hams it up as one of the best jobs of a "Homicidal Ygor" you're likely to see. The advancement of gore effects by 1967 standards were also improving big time. As a result, some of the gore gags (not just containing head-scalping) still hold up quite well. In my book, The Gruesome Twosome ranks high as one of Lewis' best gore films and deserves more of a better appreciation. "Right, Napoleon?"