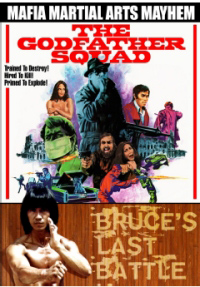 The Godfather Squad (1974): Originally released by Cannon Pictures in 1977, this martial arts film features Bruce Leong as a martial arts action hero whom the mob wants dead for interfering in an assassination. The “dynamite dog” scene cannot be missed!

Bruce’s Last Battle (1977): What happens when people are out of ideas and product to sell? They put together pieces of several kung-fu films starring Bruce Le (Lu Chien Lung) and call it Bruce’s Last Battle! We see Bruce killed by FIVE FINGERS OF DEATH’s Lo Lieh all over again, as well as Bruce fighting villain after villain – it is non-stop madness!