The Glove has got to take the award for one of the most vaguely titled motion pictures ever released. What exactly is it about? The medical profession? A boxer and his cherished (singular) sports gear? A mysterious clue left behind at the scene of a murder?

The answer is none of the above. The Glove tells the story of a group of corrupt prison guards who, as a means of punishing “offending” inmates, don a specially-made “riot” leather and metal hand covering to beat, torture and maim their captives.

As Los Angeles bounty hunter Sam Kellogg, John (Enter The Dragon) Saxon turns in a performance filled with surprising nuance. Swaggering and cocky, but by turns sad and vulnerable (he’s trying to maintain a relationship with his “visiting rights only” young daughter), Saxon’s multi-dimensional display of emotion elevates the proceeding at hand. 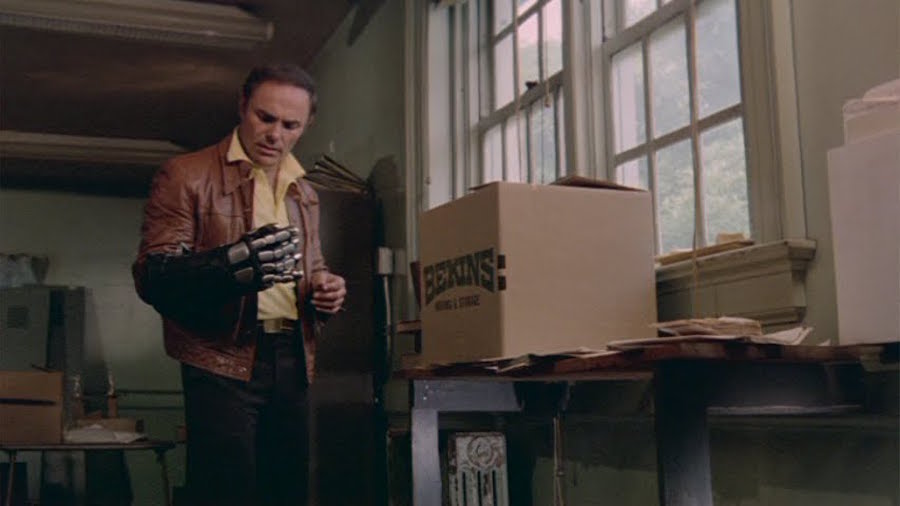 So does the presence of Rosey (The Thing With Two Heads) Grier. No stranger to exploitation cinema—and perfect at playing “serious” with a wink in his eye—Grier’s Victor Hale is a wrongfully accused man with a giant football-player frame (no stretch as Grier was a former footballer) and a heart of gold—even though he has no reservation about seeking out, pummeling and then violently killing his prison guard tormenters. He also sings and plays the guitar in an R & B band!

Good Los Angeles locations, a clever script (accompanied by a start-to-finish narration by Kellogg) and several deftly choreographed fight/destroy sequences (the completely demolished car and bathroom are winners!) make for entertaining viewing. So does a peek at alternative lifestyles (a gay couple living in a bungalow in the Valley) and the discrepancy between inner-city L.A. ghetto life and L.A.’s plentiful backyard pool-laden suburbs. (Look for former screen idol Joan Blondell as a scheming but loveable elderly bookkeeper on the run.)