The Flesh and the Fiends/Review

< The Flesh and the Fiends

What you are about to read is absolutely true. The names presented here have not been changed in the interest of preserving historical accuracy.

Thanks to a sudden surge in the popularity of medicine and anatomical study from the early 1700s until around 1840, it became a common problem in Scotland medical schools to keep fresh cadavers on hand for study. Students were packing the classes in record numbers and the law restricted the number of corpses that a school could have per year (which was usually only one). To combat this, a group of entrepreneurial people nicknamed resurrectionists (a fancy name for graverobbers, essentially) came up with the idea of looting graves and selling the bodies to the schools. Since the supply of freshly dead bodies was incredibly thin, the professors that taught these classes had no qualms about buying them up, as it was helping to further the advancement of medical science. 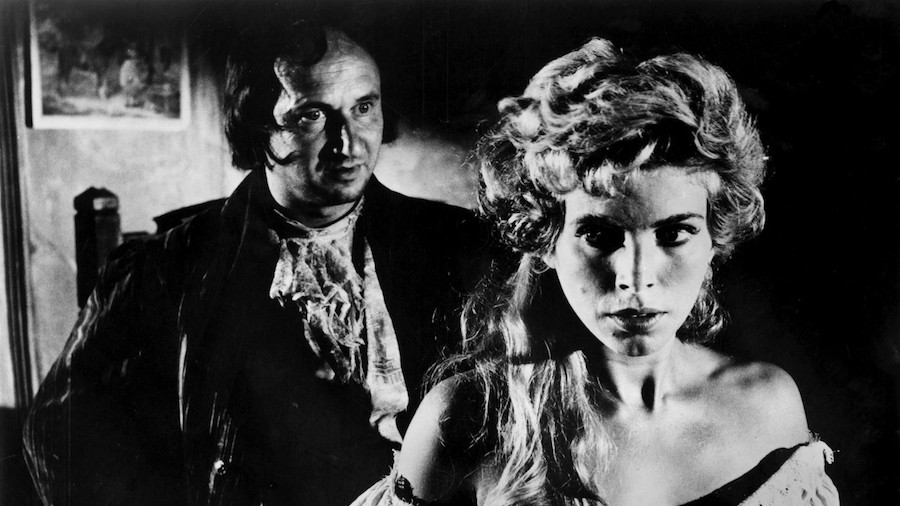 Enter William Burke and William Hare. Sensing that a gold mine could be had with this endeavor, the two resourceful men started their own corpse excavation service and supplied more than a few bodies to the town's most prominent medical doctor/teacher Dr. Robert Knox. When it was deemed that mere graverobbing was not giving them enough product to distribute, though, Burke and Hare decided that they would take a new approach to their craft. Instead of actually visiting and desecrating graves for bodies that had already begun the decomposition process, they set about murdering the local drunkards and filth that littered the streets of Edinburgh, Scotland and brought to Knox's door the freshest bodies he had ever seen.

Though authorities think that the two may have murdered upwards of thirty people while in the employ of Dr. Knox, it was actually the death of an Irish immigrant named Docherty that finally found them standing trial for their crimes. Never an upstanding man to begin with, Hare sold out his friend Burke and walked away a poor but free man, while his partner was hung in the town square in 1829 (and, ironically, was donated to the medical school for anatomical study). Dr. Knox, although complicit in the crimes, was not charged and was allowed to continue his teaching unabated.

Almost a hundred years later, filmmakers intrigued by the tale of the world's most famous graverobbing duo decided that it was time for a cinematic telling of the Burke and Hare story. The first film out of the gate was 1947's The Greed of William Hart (which was written by Flesh and the Fiends director John Gilling and was so titled because he was not allowed to use the perpetrators' real names at the time) and has been followed by three more films since then, the latest being the 1985 film The Doctor and the Devils (starring Timothy Dalton, Stephen Rea, Julian Sands, and Twiggy). Although I haven't seen any of the other adaptations of the story, I'm willing to place money on the idea that the 1960 version The Flesh and the Fiends is the best of the bunch. 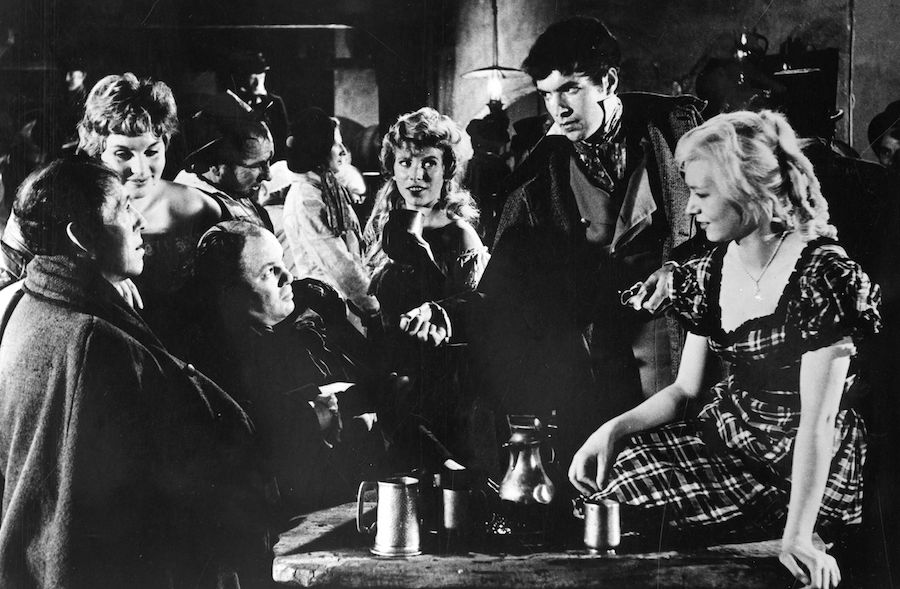 Taking a little literary license, Gilling's vision of the story suggests that Burke and Hare (played brilliantly by George Rose and Donald Pleasence) became a little too ambitious in their dabblings and ended up murdering the slutty alcoholic girlfriend of a medical student (and then the student himself), before being caught murdering a dimwitted street urchin that happened to stumble onto the disposal of the student's body. Dr. Knox (Peter Cushing) is provided as a moral center for the plot, claiming that his goals were to train the best doctors possible and prevent the sullying of the medical profession by those who sought to practice it solely for financial gain. The film also suggests a more dramatic fate for Hare than the death as a poor man fate that he suffered in his real life. Despite these alterations, though, The Flesh and the Fiends is a remarkable British horror film that has seemingly been all but forgotten in the wake of such things as the popular Hammer horror films and, quite possibly the most popular serial killer movie of all time, Psycho.

While many films from the sixties have quickly become dated thanks to modern filmmaking, this film actually seems to be just as fresh as if it were written only last year. Sure, there are some lengthy dialogue passages indicative of the era and a few of the performances have that acting feel common to most films prior to the seventies, but I can think of very few films from that period of time whose script could easily be re-submitted today to a major Hollywood studio and filmed for contemporary audiences just as it appeared on the page. I'm not sure if that has a little something to do with the fact that the film is filled with uncharacteristically large amounts of nudity and violence that were common only to grindhouse films of the time, but it is absolutely amazing how well this film still stands up over forty years later. Of course, this extra nudity and violence was only seen in continental versions of the film during its original release, thanks to US and UK censors who continued to hold onto the notion that they knew what the public needed to see better than anyone else did.

What really makes The Flesh and the Fiends feel closer to our own era, though, is the fact that it touches on subjects that we are still dealing with today. The controversy of digging up bodies (or murdering indigents, as this case becomes) and using them to further medical research can almost be directly paralleled to our own controversies surrounding such topics as cloning and stem cell research. The serious questions raised by the humanity of this current research resounds deeply throughout the film and causes it to have a great deal more impact than if this were just some lurid exploitation film trying to capitalize on an interesting concept. I also have to give Gilling and his co-writer Leo Griffiths some credit in not coping out at the end of the film in this regard, either. Though there are probably some folks who will disagree strongly with the finale, it took a lot of guts for the two of them to suggest the ultimate morality of Knox and his co-horts' deeds and its impact on the medical world. 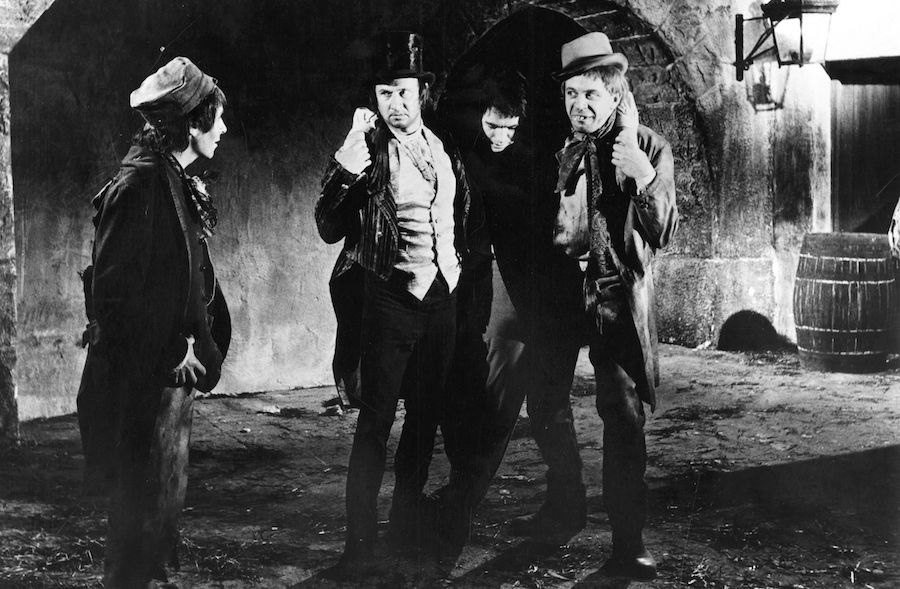 Controversial issues aside, what this film really has to offer are some performances that are some of the most amazing that I have ever seen. I know very little about the actual Knox other than what I have read concerning this case, but I will forever more only be able to see him as Peter Cushing. Cushing was apparently drawn to this role because of the real Knox's tenuous correlation to Dr. Frankenstein (a role which Cushing had played before) and his interpretation of the real life persona is greatly intriguing. The character is the ultimate anti-hero, allowing heinous murders to be committed in the name of preserving life (a truly delicious irony), and Cushing somehow manages to convey both the good and evil in his character at exactly the same time. There is an odd sense of foreboding in hearing Cushing's Knox discussing why what he is doing is necessary while watching his ominous left eye, which remains partially closed the entire film as if it had experienced some kind of nerve damage.

George Rose plays Burke almost like a slightly wiser Lenny from Of Mice and Men, although with no less murderous inclinations (though the murder Lenny commits was, admittedly, far more unintentional than the ones committed here), and he plays the patsy incredibly well. When Hare finally ends up selling him out, the final speech he gives right before his hanging is tragically comic and suggests that the severity of his crimes was lost on him almost from the moment he began them. June Powell, who plays the ill-fated medical student's girlfriend Maggie, gets the plum role of a drunk Irish woman and she handles it with just the right amount of fiery anger that the character calls for. Her thick accent just lends even more credence to the role and she truly ends up giving one of the most energetic (if not slightly pointless) performances in the film.

The most spectacular performance here, though, is Donald Pleasance's take on the scummy Hare. Almost from the outset, Hare seems to be manipulating and scheming and Pleasance conveys all of this with a creepy sureness that seems to hint at a true evil resting underneath the character's calm exterior. He commands Burke and wife around as if he owns them, but it is done so subtly that the two don't even think twice about it (a power which is frightening unto itself), while the dramatic moment when the duo commits their first real killing is made all the more powerful by the fact that Hare dementedly manipulates Burke into doing it while he stands off to the side watching and gesturing as if he is the one being smothered. As with Cushing's portrayal of Dr. Knox, I will never be able to think of William Hare again without picturing Pleasance. 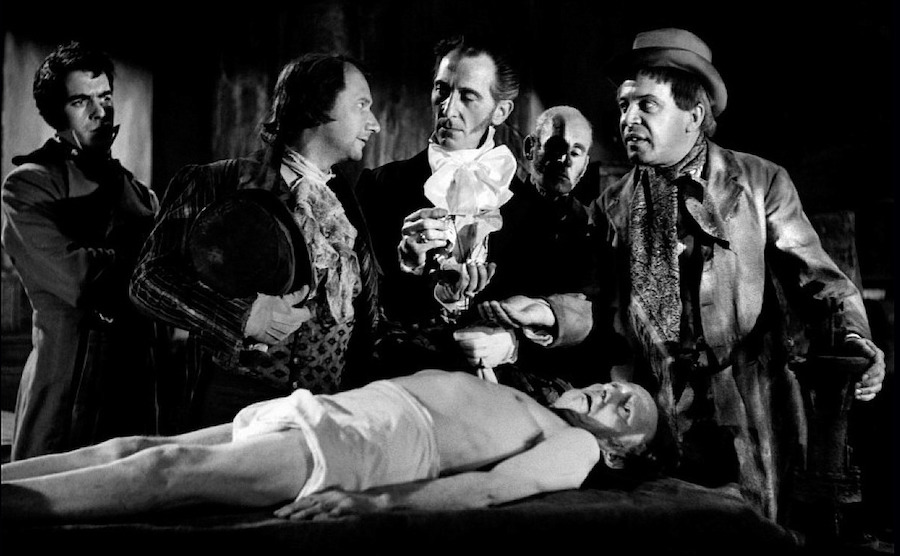 The Flesh and the Fiends has been released on DVD as part of Image Entertainment's Euroshock Collection. The film is presented in what appears to be something close to 2.50:1, although the packaging states it is 2.35:1. If it is, indeed, 2.35:1, though, then it is the most tightly cropped version of that aspect ratio that I have ever seen. For those wanting to know more about the US and the continental versions and their differences, then look no further than this disc. Both versions are presented here for examination, though I can tell you immediately that there is a difference in running times of only about thirty seconds or so thanks to the fact that there were obviously alternates clothed takes made of most of the nude scenes in the film, while some of the more extreme violence actually ended up falling to the censorís scissors.

Extras on the disc include the theatrical trailer for the truncated US version known as The Fiendish Ghouls, an alternate title sequence using the name Mania, director and cast biographies, a still gallery (features posters and ad slicks for the film), and some wonderful liner notes by genre writer Jonathan Sothcott.

If it's great performances and a compelling storyline that you are looking for, then I wholeheartedly recommend The Flesh and the Fiends. To think that a movie this fantastic has fallen between the cracks so easily is extremely depressing and it really needs to be rediscovered in a big way. Hopefully, thanks to Image's great disc, it can finally get the respect it truly deserves.