The Female Bunch (1969, USA) is a Crime film directed by Al Adamson. 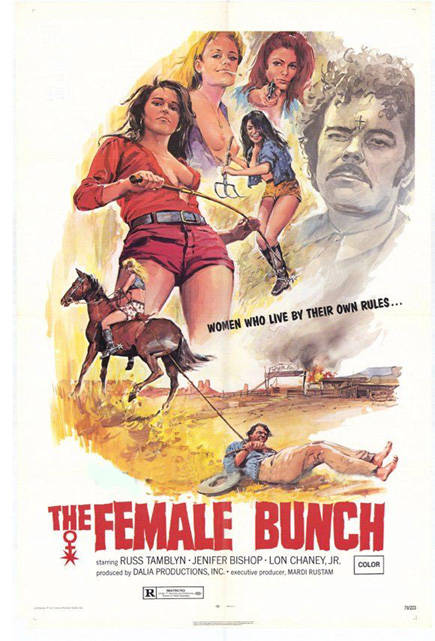 The Female Bunch is a 1969 crime film. It was directed by Al Adamson and starred Russ Tamblyn and Lon Chaney, Jr (in his final acting role in a feature film). The plot centered on a group of female criminals who cause trouble around the Mexican border. The Female Bunch was shot in the summer of 1969, at Spahn Ranch during the time that it was occupied by the Manson Family. After a string of bad times with men, Sandy tries to kill herself. Co-waitress Libby saves her and takes her to meet some female friends of hers who live on a ranch in the desert. Grace, the leader of the gang, puts Sandy through her initiation and they get on with the real job of running drugs across the Mexican border, hassling poor farmers, taking any man they please, and generally raising a little hell. Soon Sandy becomes unsure if this is the life for her, but it may be too late to get out. (Wikipedia)