While in Vietnam, a soldier is captured by the enemy and is about to be killed when a another soldier saves him. After the war the two become best friends and even happen to work together at some type of a loading dock. One day while John is getting ready to put up a crate of beer, he sees a gang putting the beer in their trunk so he begs them to leave but they disagree and hold a switchblade to his neck. Michael comes out of nowhere and saves John's ass again. After John thanks Michael for helping him, they go have a beer together. Michael drinks his beer and tells John that he has to get home to see his wife and kids. After seeing his children and telling them how much he loves them, he leaves and on the way out the gangmembers beat him to a bloody pulp. So much Michael is in a bodycast. After the incident Johnny goes to see Michael's wife at the playground to tell her that her husband is the hospital. Johnny promises Michael that he will get the people who did this so then he goes on the street asking questions and gets answers from a gang member, he didn't have anything to say at first but that all changes when the gang member sees the flame thrower in his face and gives directions where the other gang members are. 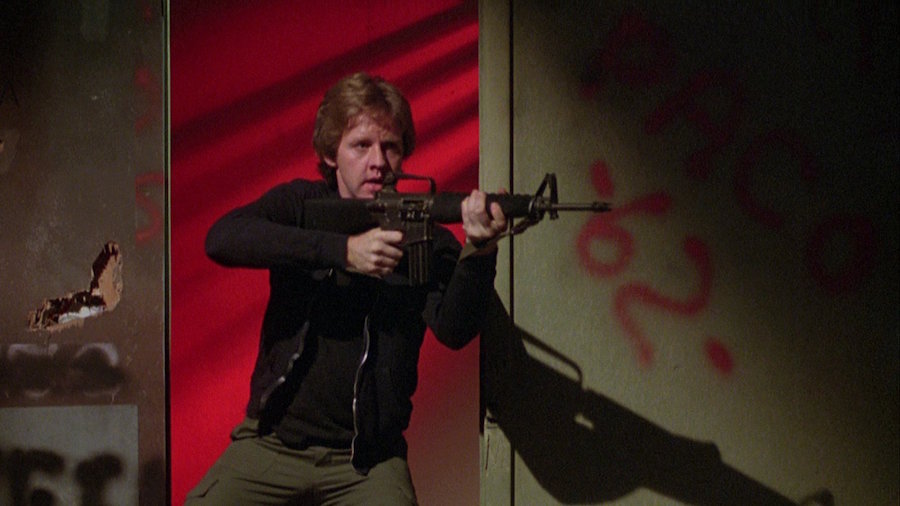 When he gets to the location where they are he knocks down the door and makes all the whores leave so he can get down to business. He kills everyone that is in there but leaves one guy alive for fun. Soon after he leaves the cops arrive with a corny detective to investigate the massacre. The detective gets answers from a prostitute with a heroin addiction that needs her fix so she gives in and gives some answers. Even after getting revenge on the gang members John doesn't stop killing. He goes to kill a crime boss, wanting to turn him into hamburger meat. After turning him into nice red meat he leaves. Later on he sees the rest of the gang members so he steals some guys bike and drives out ot kill them. The gang thinks its the same guy they met earlier but when he takes off his helmet they get a good surprise and after one of their members is killed the rest drive off but later the car blows up. The Exterminator is mainly inspired by Taxi Driver and Death Wish. It is a lost Grindhouse early 80's classic and is one hell of a vigilante revenge movie!