In 1979, a young filmmaker and a few of his friends decided to make a 16mm feature film. Taking inspiration from such low budget horror classics as Night of the Living Dead (1968) and The Texas Chainsaw Massacre (1974), Director Sam Raimi found a small cabin in the rural backwoods of Tennessee and created a cult classic. 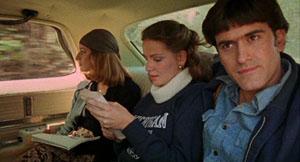 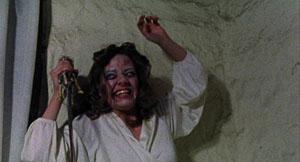 Five college friends: Ashley "Ash" Williams (Bruce Campbell), Cheryl (Ellen Sandweiss), Scotty (Hal Delrich), Linda Williams (Betsy Baker) and Shelly (Sarah York) are traveling through the backwoods of Tennesee to an old cabin. When they arrive they begin looking around the place and they find a tape recorder, a large ancient knife and a book. When they play the recording they hear the voice of a professor of archeology explaining that the book is called the Necronomicon aka the Book of The Dead. This is when things begin to get strange. Outside, the woods seem to be possessed by some kind of spirit. 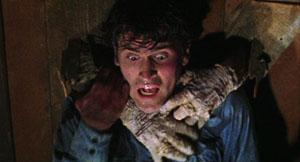 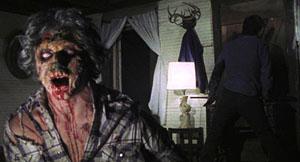 The group settle in for the night and talk a bit before going to bed. Later on, strange noises are heard outside by one of the girls. When she goes outside to look around, she is attacked by the woods themselves, the tree branches wrap around her legs and scratch her all over as well as poke her in a private place! (another example of Sam's creative style), but she manages to get back to the cabin alive. One by one, the group begin to become overtaken by the evil spirit of the woods (the scary moaning voice of the evil dead is none other than Sam Raimi). After an extremely gory battle, in which the four friends fall victim to possession, the only one left is Ash. Now that he is all alone, he must fend off his undead ex-friends and the vengeful evil spirit by any means necessary. The gore meter goes into the red literally when Ash realizes he must get rid of the bodies before they try to take his own soul. Ash uses chainsaws, shovels and all kinds of household tools as weapons. The undead heads roll, bodies explode and blood rains down in buckets as Ash turns from a meek geek to a hero.

Sam Raimi brought a true energy to this film in a way that is different from other low budget horror films. It's extremely inventive and noticably creative. Sam and his producer Rob Tapert, his younger brother Ted Raimi and the other cast and crew went all out for this film and utilized every element in cinema to fill it with excitement and visceral atmospheres. From the incredible camera tricks Sam designed, to the Special FX which were supremely disgusting and cool. The film is filled with both "happy accidents" (things that worked out by sheer luck) and planned out sequences that took another low budget shocker to a new level of cinematic horror brilliance. 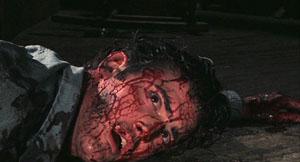 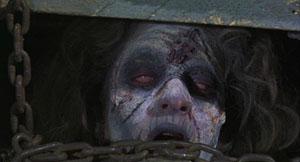 The Evil Dead was shot in various locations over several months. It was made in both Tennesee and in Michigan, outside in the woods (mostly at night) and often in Sam Raimi's own garage (look for a The Hills Have Eyes poster on the wall in the phony basement of the cabin). The film was actually inspired by an earlier student film that Sam Raimi and Bruce Campbell had made a few years prior called Within The Woods. After making this, Sam got enough money to make The Evil Dead. Part of the charm of Evil Dead is its self awareness that it is a low budget film. The cast and crew totally embraced the concept Sam created and put themselves right into the middle of the macabre madness. One scene may start in Tennesee with one actor and the next scene will be in the woods of rural Michigan with a stand in aka "Fake Shemp" (make sure to listen to the entertaining and informative commentaries by Sam, Rob and Bruce on the DVD). Evil Dead is a true "cut n' paste" film, but it's also incredibly audacious and entertaining. If you love super gory, mindbending, comedic horror cinema, then The Evil Dead is for you!