< The Devil Within Her

This DEVIL WITHIN HER stars the then-über-sexy Joan Collins as Lucy experiencing a difficult birth, leading to OB/GYN Doctor Finch (Donald Pleasance) to ominously proclaim "This baby doesn't want to be born!" But with Pleasance being no quitter -- After all, he did pursue Michael Myers through a half-dozen films -- he yanks the little bastard into the world. Upon arriving home, the newborn begins to act aggressive towards the entire household, scratching them with its unusually sharp fingernails. It has a particularly violent reaction to nun Albana (Eileen Atkins), sister to Lucy's wealthy Italian husband Gino (Ralph Bates). As her concern turns to dread, Lucy relays to her friend Mandy (Caroline Munro) an incident that occurred nearly a year ago. 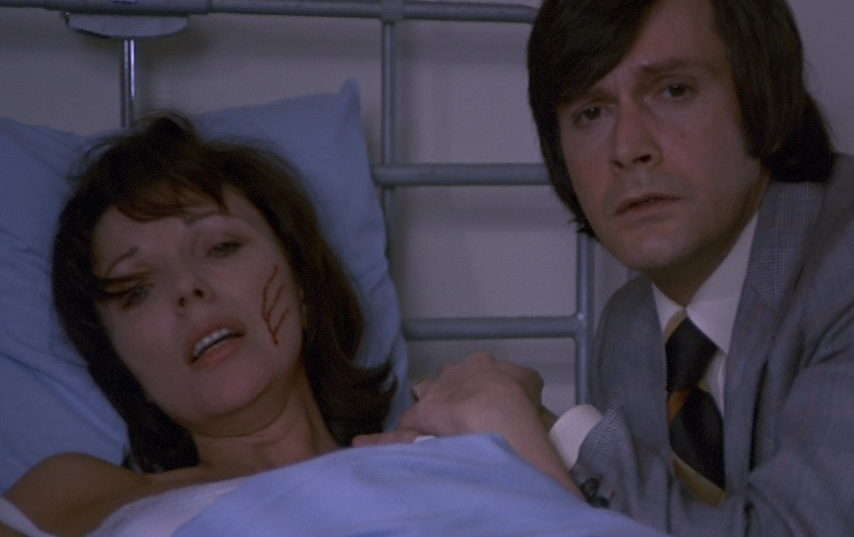 In flashback, we witness Lucy's past life as a stripper (Or at least a movie stripper, the kind that never takes off her clothes). While in her dressing room, she is approached by fellow performer Hercules (George Claydon), a lecherous dwarf dressed as a jester. His attempts to fondle her result in Lucy freaking out and screaming out. Manager/boyfriend Tony (John Steiner) burst into the room and kicks a humiliated Hercules out. He and a much more susceptible Lucy then proceed to get it on.

A short time later, as Lucy is leaving the darkened club, a infuriated Hercules re-appears and proclaims, "“You will have a baby...a monster! An evil monster conceived inside your womb! As big as I am small and possessed by the devil himself!"

Back with the present Lucy, the situation worsens as everyone from housekeeper Mrs. Hyde (Hilary Mason) to Doctor Finch start to turn up brutally murdered when in vicinity of the baby. When it turns out that even Lucy is susceptible to the evil its up to Sister Albana to save the newborn's soul while attempting to not have to throw the baby out with the holy water.