The Defilers/Scum of the Earth! 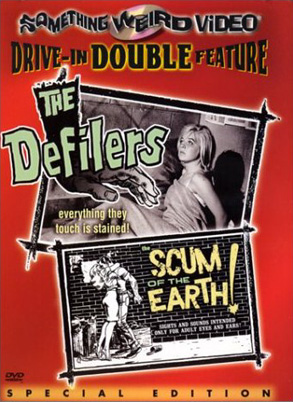 Scum of the Earth!: With the simple click of a button, a feature known as "Let's Go to the Drive-In" is activated, allowing both films to play straight through exactly like a drive-in double feature (complete with eleven trailers for other sexploitation films, an audio advertisement for an adult sexual advice book, and actual drive-in intermission shorts in-between the films!!). This feature is excellent in duplicating the feel of the drive-in experience (without actually having to sit in your car and listen to the poor audio) and all of the extras can be accessed from other menus without having to watch the whole double feature in one sitting, though the intermission shorts are all packaged together in three separate selectable segments instead of appearing on the disc individually.

The film itself has been presented in the full frame format and the black and white image is remarkably clear, with only a few relatively innocuous scratches scattered throughout. Other extras on the disc include a gallery of exploitation art and two short subjects (one featuring Scum actress Sandra Sinclair which is entitled Intimate Diary of an Artists' Model and another entitled Naked Fury). Considering the fact that Lewis has recorded commentary for other releases of his films, it comes as a little bit of a surprise that he hasn't recorded one for this film. Image and Something Weird are continuing their fine tradition of releasing little known cult films on DVD though, and this disc is a perfect example of such.

The Defilers: Feature length commentary track by David F. Friedman and Something Weird owner Mike Vraney. Friedman still seems to be the hardest working man in commentary (having done at least ten tracks in 2000 alone) and he always has a great deal to talk about. Here he describes that The Defilers was the first film he had made after he and H.G. Lewis parted company and also was intended to be shot with a great deal of violence in it (hence the name "roughie"). Perhaps the most surprising revelation about the film though is the fact that the entire thing was shot in only five days! The film itself has been presented in the full frame format and the black and white image is fairly well preserved (with only a few areas of dirt and scratches visible throughout).