"It's a nightmare in psychedelic suspense" trumpets the trailer for this wonderfully titled, and satisfyingly pervy, Argentinian thriller. "What makes them come to him? Is it the love drug? Or is it the Deadly Organ?"

"Man he's spooky looking" says young Bebe to her date when they spy a dark figure wearing a rubber Halloween mask and a Beatles wig dumping a girl's body on the beach. The villain takes off in his silver Porsche and the kids report the murder to the cops. The autopsy reveals that the girl's veins are full of heroin but it would appear that it was the hypodermic needle stabbed into her heart that finished her off! 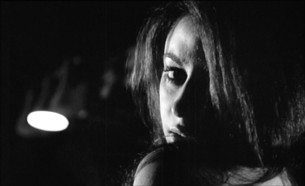 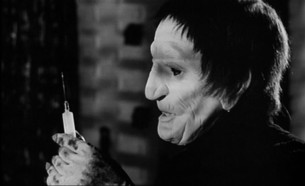 Handsome Inspector Ernest Laurie is called in to investigate the case and there is no shortage of suspects. Possible candidates include Leo Tobias the murdered girl's fiancé, obviously unhinged by his girlfriend's death, he threatens Bebe on the beach when she spurns his attempt at a moonlight seduction and is later spotted leaving a cemetery where the caretaker too has been stuck with a syringe. Then there's Doctor Bermudez who performed the autopsy and who has been obsessed with the evil influence of drugs ever since his wife and her lover were killed in a car crash while stoned. And what about the nightclub pianist who owns a silver Porsche and turns up for work with his shoes caked with sand on the night of the murder? And there's more . . .

But the rubber-faced Phantom is not content with just one victim. Other local girls have been disappearing; hypnotized by a haunting melody played on the titular organ they wander the beach at night like zombies until they arrive at the fiend's hideaway. Once inside he injects them full of heroin, strips and molests them, never removing his fright mask or hairy rubber gloves. This dude has some serious issues. The next day the girls return to their homes but remain under the influence of the love drug and the deadly melody. 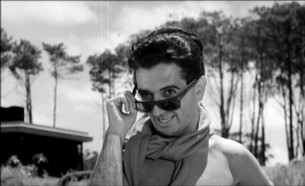 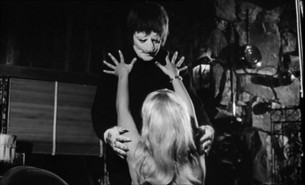 Doctor Bermudez seems to think that giving one of the victims LSD will cause her to reveal her molester's identity. "Why is my love forbidden?" she rambles in a trance describing her lover as "a real man - so groovy". "This isn't proper", says the Doc's assistant. No shit. As if being drugged and raped by a rubber glove wearing pervert and prescribed acid by your GP weren't enough trauma for one day Inspector Laurie then suggests that they use the poor girl as bait to trap the killer!

The Deadly Organ is a lot of fun. Never threatening to rise above its "B" feature budget it does generate a certain frisson from the perverse behavior of its musical maniac, there is a well-maintained mystery surrounding the killer's identity and the stark black and white cinematography, and director Vieyra's occasionally imaginative framing, lend the film an appropriate atmosphere of dread and menace. The nature of the crimes carries a sexual charge which, along with a jazzy nightclub striptease scene, put me in mind of the early films of Jess Franco in particular The Awful Dr. Orloff. The abundance of red herrings and misdirections that keep hidden the killer's identity also make the film a South American cousin to the Italian giallo although here the murderer's gloves are made of rubber, with abundant hair and claws, instead of the trademark black leather. 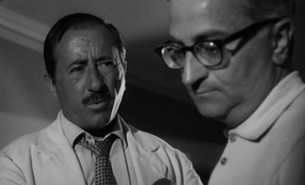 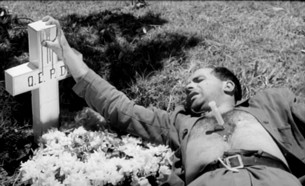 The central theme of the film is a clash of cultures between the younger generation and figures of authority as represented by parents, doctors and the police. The kids who play volleyball on the beach are carefree and hedonistic and a number of the older characters make reference to the collapse of moral values in the youngsters. Inspector Laurie even goes so far as to threaten to spank Bebe for her licentious behavior. It is in this context that the phantom organ grinder is able to seduce the young girls away from their families with his strange music, his drugs and his weird ideas about love making. He is an embodiment of the eroded morality, and the forbidden desires, that the parents perceive as threatening their sons and daughters.

In the late 1960s director Emilio Vieyra also helmed the equally off the wall vampire flick Blood Of The Virgins and the mind-bogglingly bizarre The Curious Dr. Humpp marking him as something of an Argentinian horror movie auteur. He continued making movies throughout the 1970s, 80s and 90s and died in 2010. As well as screening in U.S. grindhouses and drive-ins under its original English title in 1967 The Deadly Organ was re-released a couple of years later as Feast of Flesh on a double-bill with mad Mexican monkey movie Night of the Bloody Apes.