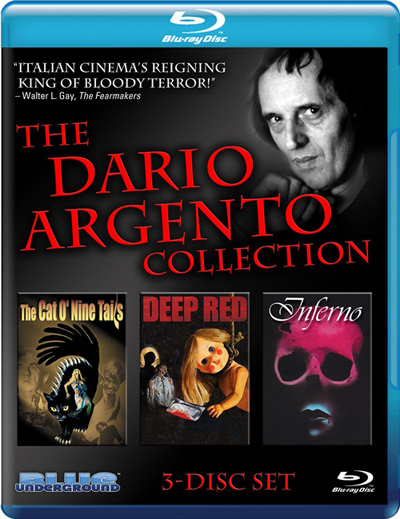 The Cat O' Nine Tails: A blind man with a talent for solving puzzles teams-up with reporter Carlo Giordani to launch a private investigation into a string of peculiar murders, all of which seem to involve a dubious genetic research facility. The killer soon becomes wise to the duo's plans and will do whatever it takes to stop them from reporting to the police.

Deep Red: A musician witnesses the murder of a famous psychic, and then teams up with a fiesty reporter to find the killer while evading attempts on their lives by the unseen killer bent on keeping a dark secret buried.

Inferno: A young woman stumbles upon a mysterious diary that reveals the secrets of "The Three Mothers" and unleashes a nightmare world of demonic evil. As the unstoppable horror spreads from Rome to New York City, this unholy trinity must be stopped before the world is submerged in the blood of the innocent.