The Cross Of The Devil/Review

< The Cross Of The Devil

Opening with a scene, of Templar knights on horseback terrorising a screaming victim, that could be an outtake from one of Amando De Ossorio’s ‘Blind Dead’ films John Gilling’s Spanish lensed ‘Cross Of The Devil’ is a soft-focus black magic murder mystery that provides a link between Hammer horror and it’s more lurid continental cousins.

Alfred Dawson is a journalist suffering from writer’s block who has a recurring dream about a girl menaced by the terrible Templars. Reading about how the knights practised black magic in a dusty old book Alfred is disturbed by a picture that closely resembles the scene from his dream. His partner Maria suggests he lay off the hash pipe.

A letter arrives from Alfred’s sister Justine begging him to come to Spain. She has suffered a miscarriage and her husband Enrique blames her for the loss of their child. Alfred and Maria make the trip to Madrid only to find Justine dead, laid out in her coffin and surrounded by candles. Her husband’s creepy henchman Cesar tells them that Justine was murdered by a thief who the police have arrested and sentenced to hang. Alfred is suspicious and in a haunting scene he imagines his sister awakens in her coffin and paints the number 13 in blood from her own slit throat on his palm.

Enrique confesses that his wife died at the foot of a mountain marked by an iron cross which the locals refer to as the Cross of the Devil. Local legends tell that every year on All Saints Day the dead knights who once terrorised the region rise from their graves to perform Satanic rites. Alfred visits the prison where the man accused of his sister’s murder is being held only to be told that the man has committed suicide in his cell.

On leaving the prison Alfred is set upon by a shadowy figure but the attack leaves him more determined than ever to unravel the mystery of Justine’s murder and to see the Cross of the Devil for himself. If he can just quit tooting on that hash pipe then he may eventually cotton on to the true identity of Justine’s killer; escape from a haunted castle where the ghostly girl of his dreams reveals the eternal curse that is her dreadful destiny; and he might stand a chance of surviving a swashbuckling showdown with the resurrected Knights Templar.

The Cross Of The Devil’ was co-written by Spanish horror icon Paul Naschy (under his real name of Jacinto Molina) and most of the cast will be familiar to fans of European horror films of the 1970’s. 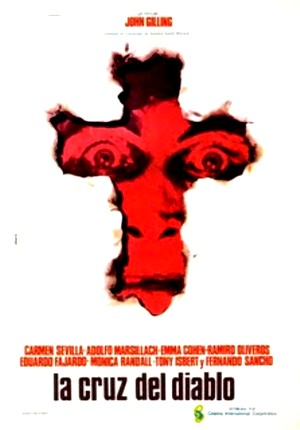 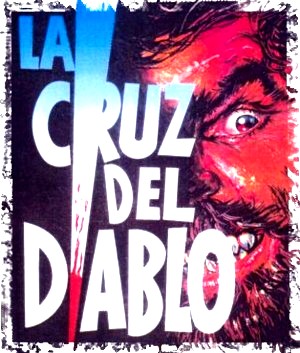 Ramiro Oliveros also stared in the bizarre ‘Swamp Of The Ravens’ as well as the giallo ‘The Pyjama Girl Case’ while Carmen Sevilla appeared in 2 great thrillers directed by Eloy De La Iglesia: ‘The Glass Ceiling’ and ‘No-one Heard The Scream’. The latter also featured Tony Isbert who can also be seen in Riccardo Freda’s ‘Tragic Ceremony’ and opposite Fabio Testi in ‘Enigma Rosso’ (aka ‘Rings Of Fear’).

Eduardo Fajardo & Fernando Sancho’s have a mind-boggling amount of genre credits to their names. In the same year as ‘Cross Of The Devil’ Fajardo also popped up in ‘Evil Eye’ and ‘The Killer Must Kill Again’. Sancho’s horror movie appearances include working up a sweat in Amando De Ossorio’s 2nd Blind Dead film ‘The Return Of The Evil Dead, ‘Orloff And The Invisible Man’ and ‘In The Folds of The Flesh’.

The theme of ghosts doomed to repeat their final hours over and over for eternity appears directly inspired by Mario Bava’s ‘Lisa and The Devil’ and the Sergio Corbucci scripted, Antonio Margheriti directed ‘Castle of Blood’. For those who like to keep score of such things there is minimal bloodshed and no nudity beyond some candle-lit cleavage.

John Gilling directed a number of effective chillers for Hammer Studios in the UK, including ‘The Reptile’ and ‘Plague of The Zombies’ (as well as the superb ‘The Flesh and the Fiends’), and does a good job here of maintaining an atmosphere of intrigue and foreboding throughout the film, achieving a dislocated dream-like quality in several scenes. Many horror films revolve around protagonists of questionable sanity and the audience are often left to decide if what they are seeing is genuinely happening or simply ‘nightmares in a damaged brain’. In the case of ‘Cross Of The Devil’ we are served a variation on that theme: is Alfred at the mercy of supernatural forces or is he in fact simply stoned out of his skull. I wouldn’t dream of suggesting that members of the audience take a hit on the devil bong before making their mind up about this one . . . but it might help.