Its code name is 'Trixie,' an experimental government germ weapon that leaves its victims either dead or irreversibly insane. When the virus is accidentally unleashed in Evans City, Pennsylvania, the small community becomes a war zone of panicked military, desperate scientists and gentle neighbors turned homicidal maniacs. Now a small group of citizens has fled to the town's outskirts where they must hide from trigger-happy soldiers while battling their own depraved urges. But even if they can escape the madness of this plague, can they survive the unstoppable violence of THE CRAZIES? 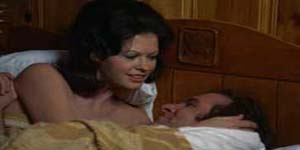 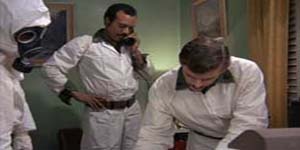 The Crazies is George A. Romero's third film and it was filmed in Pittsburgh in 1972, and it came after making Night of the Living Dead and Season of The Witch. The Crazies was produced with a diminutive budget of under 270,000 dollars! And if there is an independent filmmaker out there who can make a movie out of that, it would certainly be Mr. George Andrew Romero. The genesis for this film was not conjured from the dark mind of George Romero, he took the script from Paul McCollough, who is a music producer and composer and has contributed for a few Romero films:(Night Of The Living Dead remake, Season Of The Witch, and There's Always Vanilla. The script which at the time was titled "The Mad People" was then given to Romero who rewrote the screenplay to what it is today. A film with social undertones much like his other films. The subject puts U.S. involvement in Vietnam squarely in the crosshairs, one scene in particular has a preist setting himself ablaze just like the monk who protested in Saigon.

The plot is quite simple and straightforward. The accidental release of TRIXIE, a top secret bioweapon developed by the Pentagon, into a small Pennsylvania town soon has Army troops swooping in to cordon off the area. A perimeter is established that lets no one in or out. A complete news blackout is implemented. Citizens are rounded up and herded into the local high school where they're tested for infection and held for the duration of the crisis. (On a side note: George Romero has a brief cameo as a confused pedestrian who is being pushed around by military people.) Anarchy erupts as contaminated townspeople become violently insane — a symptom of the virus — and start attacking and murdering the soldiers as well as each other. 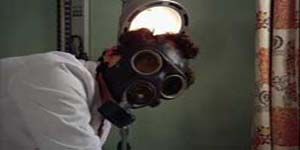 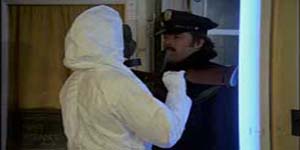 Evans City, PA (population 3,361) is a rural community so many of its people are well-armed with hunting rifles and shotguns - well mostly because it's a farm country. The Army finds itself with a war on its hands, combating not only infected townsfolk but those who choose to resist the military's heavy-handed tactics. Things really begin spinning out of control when some of the soldiers start coming down with the virus, turning on their comrades, while others take to looting from the civilians. Bureaucratic snafus and pointless command and control protocols further hamper the government response to the crisis. Higher-ups, well removed from the scen, debate the use of a nuclear warhead to "burn out the infected area" should the perimeter around Evans City be breached. On another side note: The possible use of using a nuclear warhead in order to eliminate the possibility of an epidemic is also explored in Dawn Of The Dead and later in other films like Resident Evil: Apocalypse. It just shows you how influential his ideas are! Back on subject...

In the midst of the chaos a small group of citizens — two 'Nam vet buddies (Will MacMillan, Harold Jones) who serve in the town's volunteer fire department, a pregnant nurse (Lane Carroll), a man (Richard Liberty) and his teenage daughter (Lynn Lowry) — make a bid to escape the 'Hot Zone' and reach the outside world. The film focuses on two narratives: One, the journey to freedom by this band of "escapees" and two - the expositional elements of The Crazies with Clank and his unit, which is my least favorite. And strangely enough there is also a subplot with the (Richard France) - Dr. Watts character who is trying to find an antidote to reduce or eliminate the effects of "Trixie". Some sequences, I'm sad to say are badly choreographed, shot, and sometimes the excess of exposition is overwhelming. But the film does have quite a few great action sequences. One in particularly which takes place in a forest, David and the rest are being chased by military men and a chopper. And yet another startling sequence which takes place inside an abandoned hotel/cabin has the Richard Liberty character making a pass at his daughter (Lynn Lowry) to which he then tries to rape her! - Eventually this disturbing scene of incest is broken up - but the horror is not far from over, the Richard Liberty character, who is startled and ashamed hangs himself! These two shocking sequences really took the film to another level. 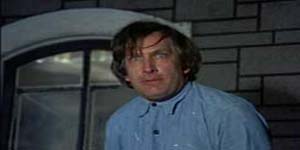 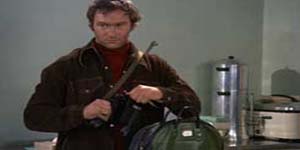 The film finally reaches its climax most of the lead characters die - and like most Romero movies everything goes out of control. There is an outbreak of civil unrest and the military has lost all hope and can no longer contain the outbreak in Evan's City. The only resort will be to drop a nuclear bomb in order to avoid an epidemic. Despite the film's low production values, the film is a true gem and has influenced films such as: Danny Boyle's 28 Days Later, Outbreak, and the awful ripoff that is known as Nightmare City. The film is evocative, witty, but lacks many things in order to become a great film. From what I hear there is a remake in the works and Romero is involved. I hope they can transcend this film to its true potential.