Count Orlock knows there were many children who grew up in the 1960s before video stores or even cable television that simply delighted in watching scary movies on Saturday Nights on programs like Chiller Theater hosted by folks like Zacherley (or Vampira) who mixed macabre humor and weirdness in a wonderfully entertaining ways.

The 'monsters' might sound like loud lawnmowers with lots of echo and reverb added. That strange theramin instrument might be used to create an effectively creepy out of this world sound. Scraping and clattering percussive noises were usually part of the sound design and just the thing to make sure young tykes would never get to sleep at night as every house creak would bring them from the brink of sleep to full attention. The things that go bump in the night like to wait for you to fall asleep, you know. What was that? Shshsh I'm serious I heard something. Someone is in here I can 'feel' it. 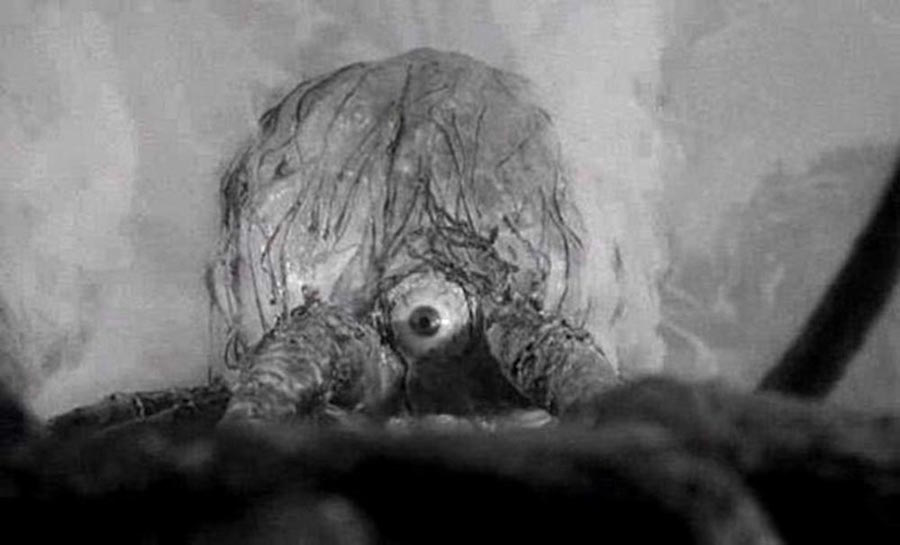 Then there is that misty cloud that rolls down the mountains. Those people trapped in the observatory as hideous creatures wait for them just outside. There is that little girl running after her ball who is then grabbed by a living vine-like tentacle attached to THE CRAWLING EYE.

A creature we wait nearly two-thirds of the movie to see. The bulging nervous roving eye in an octopus like creature covered in pulsating veins whose super long tentacles are capable of squeezing and decapitating its luckless victims. Its first appearance is dramatic, shocking and to all under 12 who watched this one in the 60s absolutely unforgettable. I mean 40 years later you'll find baby boomers babbling about this nonsense.

Babbling' about a 47 year old, 1958 very low budget black and white cheesy flick with primitive special effects, obvious sets, painted back-drops and an international cast of performers who greatest claims to fame were slightly better b-movies, old Disney flicks and bad U.S. sitcoms with folks like Larry Storch and Ken Berry. You know GET A LIFE! If you took the budget of this movie and converted it into today's dollars you'd get a tank of gas and trip to COSTCO to fill your trunk full of supplies. Maybe.

Now for those of you still with me, The Crawling Eye (aka The Trollenberg Terror) always receives pretty low-ratings in most movie guides even though it is actually a better than average low budget creature feature. Leonard Maltin and those other guys don't know what they are talking about. You compare this movie to Rosemary's Baby or Alien, it's not much of a contest, but you'd be a bully to compare such things.

The Crawling Eye was based on an English TV. mini-series and several cast members from the TV series had leading roles in the film version. The reason this happened is because a couple years earlier Hammer Films had its first big success with the Quatermass films, which converted the popular character and television serial into a film. When the transition was made it was decided to make the film more appealing to American audiences, Brian Donlevy would play the lead character-it upset purists at the time a great deal, but the tactic worked as the film became an international box office success. Other British producers were taking notes and quickly created low-budget horror films that had elements designed to appeal to American audiences. Boris Karloff starred in the Haunted Strangler, Donlevy in Quartermass sequels, U.S. shot footage and supporting characters were part of Fiend Without a Face. For Crawling Eye it was Forest Tucker. Forest Tucker was a supporting actor in a number of popular Westerns in the late 40's and throughout the 1950s. England used him in three cheap horrors: The Abominable Snowman of the Himalayas (1957), Cosmic Monster aka The Strange World of Planet X and The Crawling Eye. You see how they sensationalized the titles of movies aiming them right at American Teenagers? That's why England's 'Quatermass Experiment' became The Creeping Unknown (1956), and Quatermass 2 was re-titled: Enemy From Space (1957).

In the U.S. the film was trimmed to about 75 minutes and a few additional seconds of footage was cut from the TV. prints many of us thrilled to as children. The Image DVD you'll be happy to know offers the 84 minute uncut original edition.

EYE with a prologue as two mountain climbers try to talk to the third person in their team. Suddenly there are death screams and someone falls, but the safety ropes still have him. As he is pulled up one of his fellow climbers is shocked to discover the man's head has been ripped off his body. EEEEEK

Traveling by train is an American, Alan Brooks (Forest Tucker-several years before his F-Troup gig on American TV) and in the same car are two sisters, Anne (Janet Munroe) and Sarah (Jennifer Jayne) Pilgrim. We'll later learn the sisters have a clairvoyant mind-reading act that they perform all around Europe. Ann is very psychic and though the sisters are supposed to be going to Geneva, Ann suddenly insists they get off the train at Trollenberg, which is a small village in the Swiss Alps. That's where Alan is going to meet up with a colleague of his. We aren't quite sure what Alan does, but it might be some kind of undercover government work. He's a mystery man and for a while we aren't even sure if he's a good guy or a bad guy. Okay it's pretty obvious he's supposed to be the hero and the good guy, but hey there might be someone who is fooled for a few minutes and . . . Okay okay maybe not I was just saying. Oh, never mind.

As the film progresses we learn more details and find out that Alan (Tucker) was part of a scientific investigation team in the South American Andes. Strange things involving radioactive clouds and possibly beings from outer space occurred there too. What is happening in the Swiss Alps seems to be paralleling what happened in the Andes several years ago. We are introduced to several characters including the brilliant scientist Professor Crevett (Warren Mitchell) who has built an expensive observatory in the mountains just above Trollenberg. He has received a large grant from the Swiss to study cosmic rays. The observatory is built like a fortress and is equipped with lots of gadget including television camera mounted on the room. One of the characters at the Hotel (played by Laurence Payne) is very suspicious and curious about Alan Brooks.

Since part of the 'fun' in the movie is not only waiting for the creatures to attack but in finding out what the various characters are up to and what they do, I won't spoil any of the minor surprises the film has in store. There's quite a lot going on and the best news is, we don't have to squirm through a silly romantic sub-plot or sit through any bad musical performances. There's plenty of awkward exposition and ridiculous dialogue spouted by the various characters and of course there's psychic phenomena going on as well which eventually gets everyone in a situation where the 'monsters' are attacking the observatory. Along the way we have a couple more gruesome murders and a couple of re-animated zombies as well. The women are pretty and there's a little cleavage on display-but mostly of course we wait for the arrival of the monsters.

The first time we see the CRAWLING EYE it's pretty effective. Unfortunately however the extremely low budget didn't give Les Bowie much to work with and the special effects become so cheesy, cheap and obvious they are laughable. At the film's climax we see model work far inferior to that of the 2nd tier Japanese horror films. Stock footage is awkwardly cut into new footage; there are visible wires and primitive rear projection techniques being used. Still the H.P. Lovecraft inspired creatures are creepy imaginative creations. 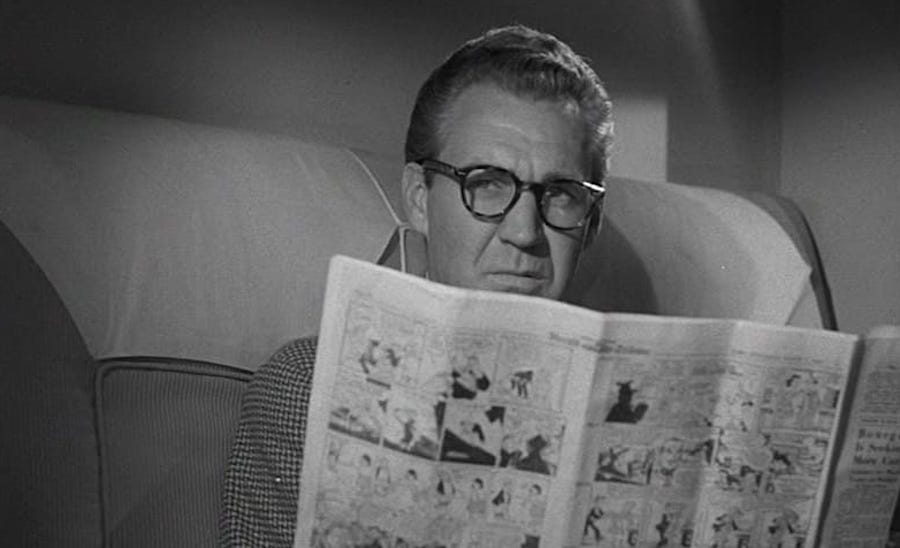 No one of course should be expecting anything close to the special effects they are capable of today And you also won't be getting special effects of the Ray Harryhausen variety either. Harryhausen could have easily designed better effects with his stop-motion techniques but not everyone has his talent, resources and genius and to many of today's audiences the Harryhausen effects look cheesy and old-fashioned too. However if you understand the craftsmanship and creativity (rather then just technical skill and lots and lots of money) that went into how effects in these movies were created you would probably have more respect for how much was done for very little. Money poured into the special effects of films has actually robbed us of some of the charm older b-movies once possessed. The creature in this one I find one of the more interesting monster designs. It is indeed unfortunate the execution of the effects was below average.

A real plus with CRAWLING EYE was how the setting itself can create suspense. It's set high up in the mountains. There's a hotel in a valley that has an aerial tram that connects it to the observatory and there are base cabins used by mountain climbers not far away. The mysterious cloud floats down the mountain into the valley as everyone runs to the observatory for protection. Of course the cloud and it's the evil creatures climb up the mountain for the final showdown.

Being trapped in an exotic locale is more interesting than just be trapped in say a farmhouse. The clouds are radioactive and they are also very cold. They crystallize the phone lines, cut off the only road in or out of the village and they even create havoc with the cables that are used for the cable cars!!! A lot goes on in this film.

The screenplay was by Jimmy Sangster (who would work on several Hammer films including the following year's THE MUMMY) based on the teleplay The Trollenberg Terror that was written by Peter Kay. Quentin Lawrence, who had directed the six-part television serial, directed the film and he cast some of the same people from the TV. series for the film. Lawrence also directed episodes of The Avengers. Producer Monty Berman had gotten his feet wet (or at least sticky) with BLOOD OF THE VAMPIRE in 1967. Janet Munro who plays Ann Pilgrim in the film went on to co-star with rising star Sean Connery in Darby O'Gill and the Little People and then made Swiss Family Robinson and 1961's The Day The Earth Caught Fire. Laurence Payne continued to do a lot of British television and radio work and appeared in the films The Tell-Tale Heart (1962), The Vampire Circus (1971) and One Deadly Owner (1974). Forest Tucker rarely was cast as a leading man but remained busy playing a variety of television and film roles and appeared in such films as Chisum (1970), Final Chapter: Walking Tall (1977) and the 1978 version of The Adventures of Huckleberry Finn. He died in 1986.

The film has quite a bit of camp value because of many atrociously written lines of dialogue, several actors using very theatrical sounding continental accents and the cheesy special effects.

If you're a nostalgic baby-boomer, then you'll appreciate seeing this pristine looking uncut 84-minute version of this cheesy 50's creature feature classic.