With The Chinese Boxer (released in US grindhouses as The Hammer of God) we get to witness the first true open hand kung fu film that was made in Hong Kong. Before it, the films were almost entirely about sword/weapon fighting. We also get the first 'student avenges master' storyline that became heavily redone over and over throughout the 70s and 80s. Jimmy Wang Yu uses a unique mix of different martial arts styles: kung fu, wuxia, samurai, karate all sort of mixed together into one big explosive blend. In addition it has roots in the Italian Spaghetti Westerns, which you can see in the different stand offs and in the quirkiness of the film's style. The Chinese Boxer actually came out BEFORE Bruce Lee made his debut in The Big Boss a year later. Actor-Director Jimmy Wang Yu was the biggest star in Hong Kong at that time but he seemed to get kicked to the curb in the shadow of Bruce's large presence and personality. Decades later, this film would have a big influence on Quentin Tarantino's exploitation epic Kill Bill (2003-04). It even has aspects of a superhero movie with Wang Yu playing the masked vigilante with amazing powers.

Chinese Boxer opens like many other kung fu films do. A bad guy walks into town, kicks some children's toy ball away and challenges the local students of a kung fu school to show what they're made of. After getting their asses kicked hard, one student runs to find Lei Ming (Jimmy Wang Yu) who works in a quarry breaking rocks with a large hammer. Lei Ming runs back to find his school in turmoil. That is, until his Master Lee (Fong Min) takes out the abrasive fellow with a punch that makes him spit blood. In shame, the baddie leaves the school and things seem to be alright for the moment...

After his big failure, the main baddie leaves and comes back to town with some pals from Japan. The main one being a super karate fighter named Kita (Lo Lieh). These guys look like shaggy haired creeps. This is where the film begins to get fun. The Japanese trio show up at Lei Ming's school one night and they take on the entire place. When you see Lo Lieh do his thing you will go nuts. This guy doesnt just fight, he is a ruthless badass and he makes his character Chao Chi Hao in Five Fingers of Death look like a joke.

The next day Kita and the other men relax in a local restaraunt, but when one of Lei Ming's fellow students shows up in the place, he sees Kita and the Japanese rival walks over to taunt the young man. When the young man insults the leader, Kita literally goes through the roof, breaking the stone ceiling and the two other karate fighters take on Lei Ming's friend. He holds up for a little while but then he goes down hard when his eyes are gouged out and blood runs out of them like faucets.

The trio of Japanese karate men then take on the entire kung fu school and destroy the place, killing Master Lee and the others. Heads get cracked and blood spurts like geysers!! The Chinese kung fu school is decimated by these ruthless karate toughs. This action is hard hitting and bloody much like Sonny Chiba's Streetfighter karate films would be a few years later. After the intense and earth shaking battle, the only one left alive (barely) is Lei Ming.

Lei Ming is now covered in bandages and tries to heal his wounds, with the help of a girlfriend. He takes his time and tries to rejuvenate himself by chopping wood and exercizing. The next sequence is mythic, it is where Lei Ming begins to dip his hands into hot iron thus creating the legendary Iron Fist style. I really loved how Jimmy Wang Yu shot this scene. We see different ancient chinese statues' faces as Lei Ming painfully burns his hands in the wok of white hot iron. Lei Ming also trains in "light step" techniques by putting weights around his ankles and tries to vault over some high bars he's made. After several days of doing this, he takes the weights off and he can jump as high as the evil Kita can. Since Lei Ming's hands are severely burnt from the Iron Fist technique, he now wears large white mitts to help the burns heal. 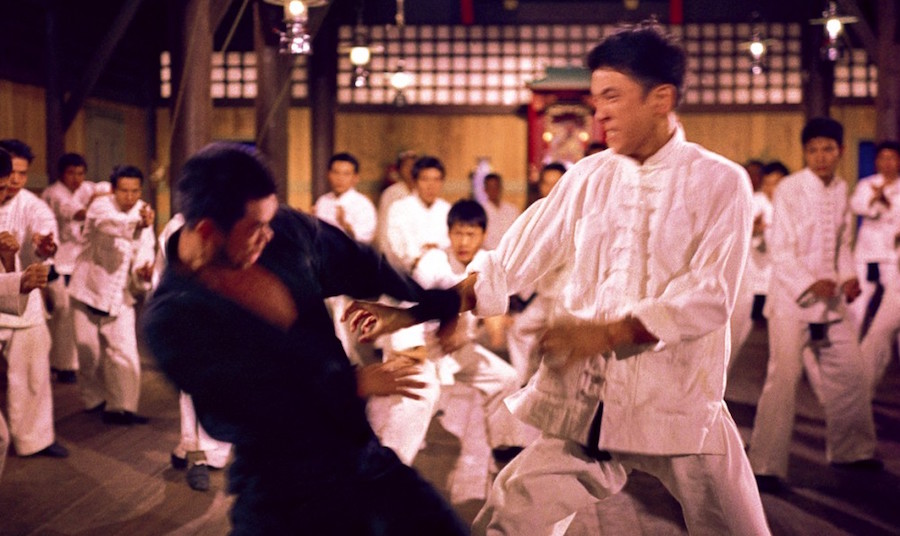 In a local casino, Kita and his thugs are now bullying the local owners to give up their money to them. They dont see Lei Ming sitting in the restaraunt drinking a cup of tea. When the thugs begin to hit the owner and knock him down, Lei Ming puts a surgical mask he's wearing up over his face. He runs to the poor man's aid and kicks the thugs out. This is the first appearance of the super vigilante Lei Ming is becoming. He looks like a Chinese doctor now, only he operates using his deadly kung fu skills!

One night, Lei Ming sneaks into the Japanese clans home and pours gasoline all over, then throws a lantern into it and just turns the whole place into a bonfire. He doesnt beat around the bush! This was another prime example of the anti-Japanese sentiment that Chinese people had at this time, (you can also see it show up in Bruce Lee's film The Chinese Connection aka Fist of Fury). Word gets out that Lei Ming is someone to get rid of. The Japanese have plenty of tricks up their sleeves too. They bring in two more samurai sword fighters. To show how their nasty skills are, Kita opens a birdcage and throws some chickadees up in the air, the samurai assassins slice them up into bite size chunks.

Lei Ming shows up the town's busy casino where all the men are playing cards and such. The only difference between the locals and Lei Ming is he has a surgical mask over his face and white mitts on his hands, so he sort of stands out in the crowd. When the dealers see him, they begin to whisper and make faces. We can see they know who he is and the next thing they do is have a soldier run and tell the Japanese leader that he's there. As Lei Ming watches the game, suddenly about 100 thugs begin to pour into the casino from all sides. They all carry chains, axes, knives, staffs and other deadly weapons. Lei Ming is stunned, but as he waits for something to happen, he ominously taps some coins in his hand. This sound elevates the tension, but with a flash, Lei Ming is into the fight, surrounded on all sides. He quickly takes out all the thugs. He crushes their sternums with his Iron Fists. This fight scene is one of the best ever put onscreen. It's totally badass and choreographed brilliantly by Jimmy Wang Yu. After getting rid of all the thugs, Lei Ming exits the casino. Now, as snow falls all around him, the Japanese leader shows up with the samurai assassins with more waiting in the field nearby.

The Japanese use shuriken and throw them at Lei Ming, but they miss. Lei Ming still has two knives he took from one of the men inside the casino. With lightning fast speed he nails the Japanese thug. The fight is still on, because the secondary Japanese samurai fighters are called in to take Lei Ming out. As they wade through the snow covered fields, ducking and hiding, one of the thugs sees Lei Ming and goes after him, but Lei Ming takes his sword and plunges it into his chest, blood spurts like water into the air. Even though Lei Ming kills off all the thugs, the Japanese leader gets away.

The last battle takes place on a mountain in the cold harsh weather. Lei Ming shows up where his last opponent, the mighty Kita is waiting. As backup, Kita brings his two cohorts to fight Lei Ming first. When Lei Ming is ready, he finally removes his mitts from his Iron Fisted hands which are now healed. I have to say, this next fight is some of the best martial arts hand to hand combat put on film. Jimmy Wang Yu puts these scenes together wonderfully and when you see them you will cheer in excitement. The fights against each thug is bone shattering. One thing I love about these flilms from Shaw Brothers is they are not cut or edited to please censors like we have in the USA. For example, in Bruce Lee's Enter The Dragon (1973), after beating O'Hara (Bob Wall) in the tournament, Bruce ends the fight with a deadly sternum breaking stomp but we never see the actual death blow. We just see Bruce's face. In Chinese Boxer, when Lei Ming stomps an opponent, we see the actual sternum crunch, and the blood flying too. Its called ACTION!! After Lei Ming takes out both men (he breaks ones arm and gouges out the others eyes, and the blood covers his body). Now, its time for the final battle against Kita.

"How cool is it to watch Jimmy Wang Yu battle Lo Lieh" you ask? In my kung fu loving opinion, its pretty damn awesome. Oh man, the fight these two have is incredible! They go at it like two rabid kung fu wolverines. They throw fists, kung fu/karate kicks miss and trees break, fists puncture torsos, bodies fly through the air in superhuman flight. I cant even put into words how great this face off is. So I wont try to. I will let you see for yourself.