I love killer kid movies. There's just something reassuring in them that makes you feel that someone, somewhere said "What the fuck? Why can't kids kill? That's gotta' be taboo, right?" It's like that lightbulb lit up over every exploitation filmmaker's head around the same time. I mean, in a matter of just a few years, you had THE OMEN, BLOODY BIRTHDAY, THE PIT, BEWARE! CHILDREN AT PLAY, CHILDREN OF THE CORN, THE OTHER, IT'S ALIVE (and the sequels), DEVIL TIMES FIVE, WHO CAN KILL A CHILD?, and this forgotten gem among others. How great was that? Nowadays, it's all J-Horror remakes and safe PG-13 horror. But back then, one successful film (probably THE OMEN) spawned a bunch of exploitation rip-offs that were competing for your hard earned dollar. Hell, it made me feel like the prettiest girl at the dance (just an analogy)! With that, I bring you Max Kalmanowicz's THE CHILDREN.

A bus load of kids, on their way home from school, pass a nearby nuclear power plant. An odd dark cloud of smoke is emitting from the plant and the bus drives right through it. Of course, this is no ordinary smoke, and it turns all of the children into black fingernailed, kill-by-touch, muderers with mischievous grins. As the body count piles up, Sheriff Billy Hart (Gil Rogers) starts to find out the horrifying link between the oddly behaving kids and the missing townsfolk. And what about the kids parents? Will they ever get their children back to they way they were? All those answers and a pretty unshocking epilogue are waiting... 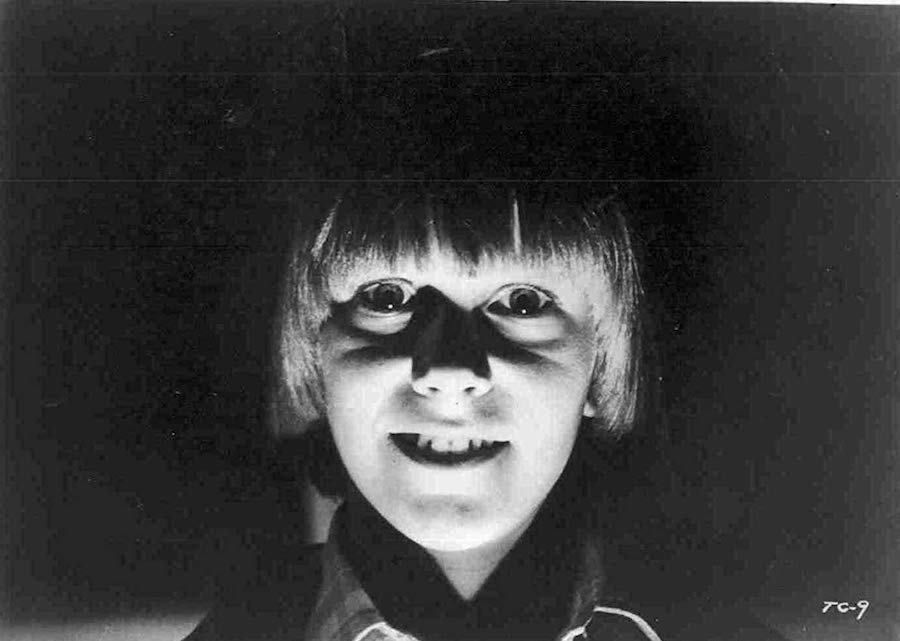 Short description, huh? That's because that's all there really is to it. I'm not going to bullshit you into thinking that there's more to this movie than there is, there's not. It's pretty cut and dry, the way writer Carlton J. Albright lays things out. That's fine with me. I paid to see some creepy little kids put the radioactive whammy on unsuspecting adults; and in that case, the film delivers. The kids are actually cute little buggers and you can see that they were enjoying themselves while making the movie. I mean, what kid wouldn't want to pretend to be able to kill with just a touch ("Touch my Man-E-Faces again bitch and see what happens!")? They're not as sadistic as the little bastards in DEVIL TIMES FIVE, but then again, Leif Garrett isn't hanging around, either. Those fuckers were sadistic! THE CHILDREN are more goofily frightning, what with their mischievous grins and all. Albright has admitted in interviews that he meant the film as both a nuclear age parable and a satirical horror film, and you can certainly see that come across as you watch it. While not as exploitively fun as BLOODY BIRTHDAY or as disturbing as WHO CAN KILL A CHILD?, THE CHILDREN is nonetheless a worthwhile addition to the killer kid cycle of the late 1970's - early 1980's. Unfortunately, after Columbine, Hollywood has shied away from this topic and it's become more taboo than it's been in a while. Hopefully, some great, unknown grindhouse film fan of a director will come along and make a new addition to this forgotten genre. But until then, THE CHILDREN is a fun distraction from the horrors of real life and a walk down 42nd Street's memory lane.