The hybrid martial arts/Blaxploitation film constituted a large part of exploitation cinema throughout the 1970s. If the pictures weren’t sharing a double bill, African American and Asian actors/athletes shared the screen in the same picture—jumping, kicking, and chopping their way to justice in films like The Dynamite Brothers (1974) and Soul Brothers of Kung Fu (1977).

Less than a year after the death of action movie star Bruce Lee —whose Enter The Dragon brought karate films to the masses—Black Dragon (incorporating the word “Dragon” from Lee’s hit as well as the word “black” from more than forty Blaxploitation film titles) showed up in theaters. It had company, namely Black Belt Jones (featuring Enter the Dragon’s Jim Kelly) a bigger budgeted and more colorfully presented concoction that was playing in theaters at the same time. Even so, the little picture that could—the Hong Kong import with the awkward dubbing and cast of unknowns—managed to make a favorable impression. 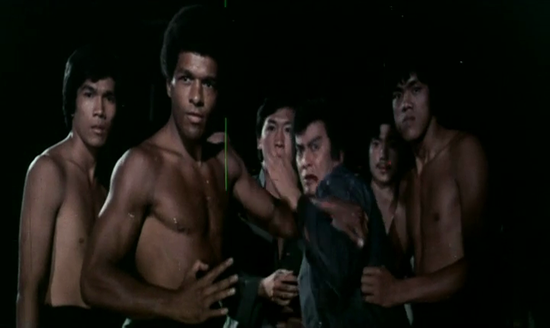 In the lead as Thai Lu an illiterate farmhand (Jason Pai Pow) supplies a pleasant face, deferring demeanor and incredibly agile body. When his wealthy brother Chu (Meng Fu) comes to town flaunting a new suit, a gold cigarette holder and money to spare, Thai Lu fantasizes about his own success and follows his brother to the Philippines where he gets work on a dock unloading tobacco; only to discover that the towering cases of “tobacco” actually contain opium.

Fair-minded Thai Lu (he takes in a prostitute and a pickpocket) needs help to make things right on the dock and finds it in the more than capable hands of The Black Dragon (Ron Van Clief) and his gang of government-backed reformists. Together Thai Lu and the Dragon attempt to end the flow of opium (whose devastating impact we are shown) from the Philippines into China.

Low budget but solid, Black Dragon’s many charms include meticulously choreographed and executed fight sequences—complete with the genre’s signature Pow!, Whack!, Bam! sounds, unintended humor (European character voices emanating from man-on-the-street Asian faces) and a rich compendium of American film clichés; “just like my mother used to make,” “I'm gonna get you: but good!” and “with friends like you who need enemies?” The film’s climactic showdown—performed on a waterfall-backed barrier reef—is both engaging and visually splendid.