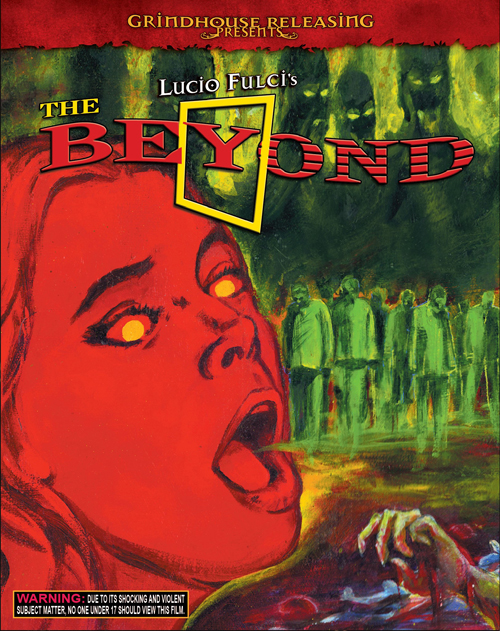 Lucio Fulci's surreal horror masterpiece The Beyond is very special to me for a few reasons. It was my introduction to his film work and it was also my first home video purchase from Grindhouse Releasing. This is definitely the movie that made me a hardcore Fulci addict. From that time on, I began watching all his films from spaghetti westerns like Massacre Time to superb giallo efforts like A Lizard In A Woman's Skin and The Psychic to the ultra gory slash-terpiece The New York Ripper. I think what intrigued me right away about Fulci was his visual style. As can be witnessed in The Beyond, he was a master cinema stylist and made the imagery in all his work highly visceral and intriguing. The staging, set designs, sound and camera movements gave his work an unrelenting, imaginative energy that really set him apart from other filmmakers of his era like Mario Bava, Dario Argento and George A. Romero.

The film quickly ushers us into the macabre madness with a sepia toned flashback to 1927 where a painter named Schweick (Antoine Saint-John) has taken up residence at a bayou side hotel in New Orleans. A lynch mob, believing him to be a warlock, soon arrive and torture him in an extremely violent sequence involving chains and quicklime. Decades later, a woman named Liza (Catriona MacColl) buys the property and begins to renovate it. When a local plumber named Joe is hired to fix the massive flooding in the basement, he accidentally opens a gateway to hell, unleashing the undead forces into the world. From this point on the air is filled with dread as the demonic spirits wash over the Louisiana city wreaking terrifying turmoil.

What makes The Beyond special in the realm of horror films is how instead of creating a story with a standard three act structure, Fulci chose to make a work of pure cinema. This movie plays out like one long nightmare where beautiful and shocking imagery (instead of plot) is used to captivate and repulse us. Cinematographer Sergio Salvati's technical brilliance gave the movie a perfect otherworldly atmosphere for the evil to permeate and strike. The gruesome effects sequences featuring the astounding Italian artistry of Gianetto De Rossi & Maurizio Trani are another main highlight. You'll see victims being melted by acid, tarantula attacks, heads exploding from gunshots, eyeball punctures and many more sights that will rattle your senses.

The Beyond is truly a cinematic experience like no other and one you can never forget after you see it. I think what Fulci was able to do was tap into a place that brings our subconscious and cinema together in a way that simultaneously disturbs and delights our minds. This is the main reason I've always loved the movie. Regardless of some of the more low budget attributes that can be found inside, The Beyond is a genuine treasure of the horror genre that deserves all the recognition it gets from its devoted legion of fans.

PICTURE: Presented in (2:35:1) 1080p High Definition - A sublime transfer makes this the best the horror classic has ever looked. From the haunting pre-credits sequence to the scenes taking place in the daylight of New Orleans' famous French Quarter, fans will be thrilled with the quality of the newly remastered edition.

AUDIO: 5.1 Dolby Digital Surround Sound Remix by Academy Award Winner Paul Ottoson - Along with the gorgeous visual restoration, this vibrant new surround sound mix brings all the brilliant audio effects and pulse pounding music by master composer Fabio Frizzi into your home environment with a depth and resonance. The sinister soundscape of The Beyond will keep you in its grip from the intense, chain clinking start to its epically frightening, otherworldly finish!