The Beauties and the Beast/Review

< The Beauties and the Beast

If there's one thing that I consider to be a good luck charm in watching an excellent and memorable exploitation/grindhouse flick, it's that it has to start out with an introductory sequence. A voiceover narrator is fine, but I consider things to really get cookin' when we have an announcer or an actor talking directly to the screen about the adventure that we, the audience, are about to embark on and hopefully never recover from! All the great ones seem to have it. From Plan 9 From Outer Space to Blood Freak. Even all the way through to another generation with Walter Hill's "Special Edition" of The Warriors. It's always a good omen to start your film in this tradition. Sure enough, THE BEAUTIES AND THE BEAST reserves it's sacred space on the rack of greats and opens with one! In this case, we have some sort of a park ranger or a hunter telling us about the legends of the yeti, AKA Sasquatch, AKA Bigfoot. Ah, we must be in the era of Bigfoot craze. But rest assured, we're definitely going to see a Bigfoot movie unlike any other ever made! The narrator unintentionally hesitates with some of his line-readings (A good sign that we're in for something special) and presto! We get a glimpse of the big hairy beast! And unlike Robot Monster (Who specialized in a gorilla suit and a deep sea diving helmet) the Bigfoot character that we see has a gorilla suit and a cro-magnon mask. And what is Bigfoot's motive in this movie? Well, just go ahead and ask anybody who has seen this film because even they can't give you an answer. During the first 15 minutes of the film, Bigfoot abducts random women who happen to be roaming the forest (Sometimes they're topless, sometimes they're not) and he always keeps them reserved in his underground cave (Two of these gals he messes with are personal favorite starlets of mine, Sharon Kelly and Sandy Carey) but what are his plans for them? Does he eat them alive? Does he introduce the audience to a new form of bestiality? The truth is....Nobody knows! We never again get to visit this cave for the remainder of the movie! Nor do we ever get to find out what happens to these girls! Did the filmmakers just run out of film & money to finish this plot point? Or did they just abandon this idea altogether right in the middle of filming? Who knows. See? I told you this is unlike anything you've ever seen! 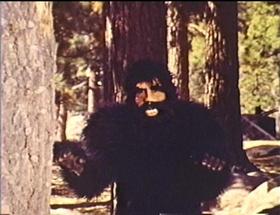 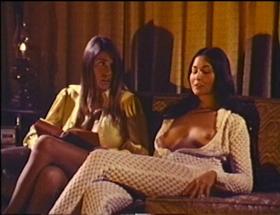 Ok, if it's linear storytelling and competent filmmaking that you want, you finally do recieve it when we get introduced to a pair of friends, Anne and Mary (Jean Gibson & Uschi Digard) who decide to get away from town for awhile and venture into...You guessed it, Bigfoot's turf. But before the movie evolves into predictable territory with "The Beast" abducting some more "Beauties", Anne and Mary instead run into a hippie-like group who spend their winters in a nearby cabin. Now here's where things get a little interesting. We have a major plot point developing when Ann and Mary are told by the group that a mysterious stranger pays them in valuable, gold coins in exchange for leaving food out for the stranger at night. This Mcguffin will soon involve two sleazy, robbers who will be on the trail for the treasure of retrieving these gold coins. But we also have a subplot forming when Anne starts to develop somewhat of the hots for the hippie-group leader when he pulls out his guitar and woos the ladies with his sensitive, folk singing. Jealousy soon sets into the mind of Sara (The singer's girlfriend) when, that night, she has a dream. And boy, I consider this to be one of the best--If not the best dream sequence to be found in grindhouse history as both Sara and Anne have a western gun-duel/showdown wearing nothing but cowboy boots and gun belts! Though this extraordinary dream/nightmare sequence is quite brief, it's capped off by a nice 70's style soft-core sex scene with Sara and her boyfriend (I'm telling you, there's something in this movie for everyone!) Anyway, the movie soon reaches it's "Thrilling climax" when those two gun-toting, scumbag fortune hunters show up to rough up our beloved, sex-filled cabin dwellers. But expect the show to close out with attempted rapes, guns being fired, bones getting crushed, Uschi Digard running around, a new character saving the day, and a drive off into the sunset. 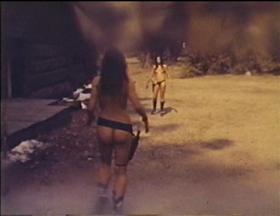 I'm really guessing that this was supposed to be the last gasp for nudie cuties in the tradition of The Beast That Killed Women or The Monster of Camp Sunshine. In short, a flick with lots of boobs and a monster running around---And since times were changing, this allowed the inclusion for more graphic sex scenes to be included as the hardcore border was about to be broken. But what survives out of The Beauties and The Beast is some sort of a mutated, minor masterpiece of it's kind. I really tend to be a fan of certain movies that seem come out completely wrong, and in return, I gain such an odd appreciation for the absurdness of it's story and it's disregard for filmmaking 101. It's all over the place in this film. There's continuity problems (Cave scene, anyone?), plot-holes (So Mary and Anne actually met a hermit? When was this? I sure didn't see it!), technical mishaps (Sometimes there's live sound recorded, sometimes everything else is dubbed in post) but in the end, it all adds up to a one-of-a-kind experience. Who needs a nicely, polished film when you can have pure fun out of enjoying a wild, crude, sexy, off-the-wall, pointless, bizarre film like this? And even if you want to have your exploitation I.Q. raised when watching The Beauties and The Beast, just remind yourself that you're witnessing one of the more, and rare, dialogue-heavy performances given by one of the sexploitation queens of the era, Uschi Digard. Just to hear her talk about how faster you get drunk at a higher elevation or to hear her murmur out, "Christ! It's chilly!" in her lovely multilingual accent is really special. If that doesn't do the job, fast-forward to the great dream sequence. And if that doesn't work, just try to watch the movie from beginning to end and name another movie that compares with this. I guarantee that you'll be left quite stumped in finding another movie that goes hand-in-hand with this one-of-a-kind oddity.