< The Beast Must Die

This film is a detective story - in which you are the detective. The question is not 'Who is the murderer?' - But 'Who is the werewolf?'. After all the clues have been shown -- you will get a chance to give your answer." -- Thus opens the entertaining werewolf mystery film The Beast Must Die.

Tom Newcliff (Calvin Lockhart) is a well-to-do big game hunter who has hunted just about every creature known to man. His latest quarry, though, is one that is not quite so well known (at least, not outside the realms of horror films)... a werewolf. Convinced that he can pinpoint one of the mythical lycanthropes, Newcliff invites five suspect people to his lavish home and traps them there using state of the art surveillance equipment to catch them before they can escape the grounds and plain old mechanics know-how to disable their vehicles so they can't simply drive away. Over the course of three days, he plans elaborate ways to try and get one of the people to finally reveal themselves as the beast they truly are.

The Beast Must Die (not to be confused with the lesser known The Beast Must Diet) is an oddly compelling film brought to us by the British born Amicus Productions, a contender to the Hammer throne and producers of two Doctor Who films in the mid-sixties (as well as the original seventies Tales from the Crypt films). Their take on the mystery film, a strange blend of The Most Dangerous Game and Clue, features the standard plot revolving around a group of people gathered in a secluded setting with the intention of figure out which person is the "killer". This plot device had been used in countless films, but it never really seems to get tiresome. Putting the werewolf spin on it, though, slightly sets this film apart from its myriad of contemporaries.

The plot structure is perfectly constructed so that the werewolf could be just about anybody. The film has fun with its audience in this respect by throwing in a ton of red herrings throughout, making us question every motive and action performed by a character. Only towards the end (just before the gimmicky "Werewolf Break") does the film finally decide to divorce itself from several of the charactersí suspect natures and actually helps narrow down the selection slightly. Even after the "Werewolf Break", the film throws one final twist into the revelation of the actual creature (which had me questioning the continuity of several previous scenes) that screenwriter Michael Winder had the foresight to explain away perfectly. 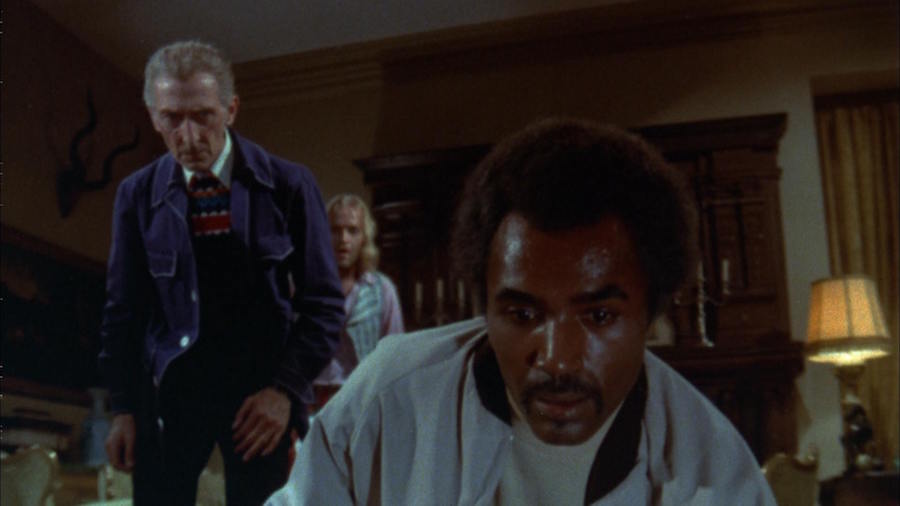 The brilliant cast (peppered with a virtual who's who of British acting) is able to pull off some of the more implausible aspects of the film perfectly. The always dependable Peter Cushing turns in a decently reserved performance as doctor who is obsessed with lycanthropy (although to a lesser extent than his captor), a trait which brings about his initial inclusion in the list of suspects. Michael Gambon (The Insider, Sleepy Hollow) is also fairly understated as a concert pianist who aroused suspicions because people ended up dead in whatever city he would happen to be playing in. The Rocky Horror Picture Show fans will delight to seeing Charles Gray (who played the criminologist in the cult midnight film a year later) in a role as a former diplomat who was exonerated after being tried for the mysterious deaths of two of his staff members. The best role in the film, though, goes to the character of Paul Foote, who was played by Tom Chadbon (The 10th Kingdom). Chadbon gets the most campy role of the entire film, and he plays it with enthusiasm. Somehow, he doesn't even allow the campiness to overshadow the other performances in the film and it compliments the other actors amazingly.

The Beast Must Die has been released on DVD as part of Image Entertainment's Euroshock Collection. The film is presented in its original aspect ratio of 1.66:1 and the transfer is pretty decent (though a 16x9 enhancement would have been a nice inclusion. In fact, the only real damage I saw on the print was during the Cinerama Distribution logo. The disc itself contains no special features.