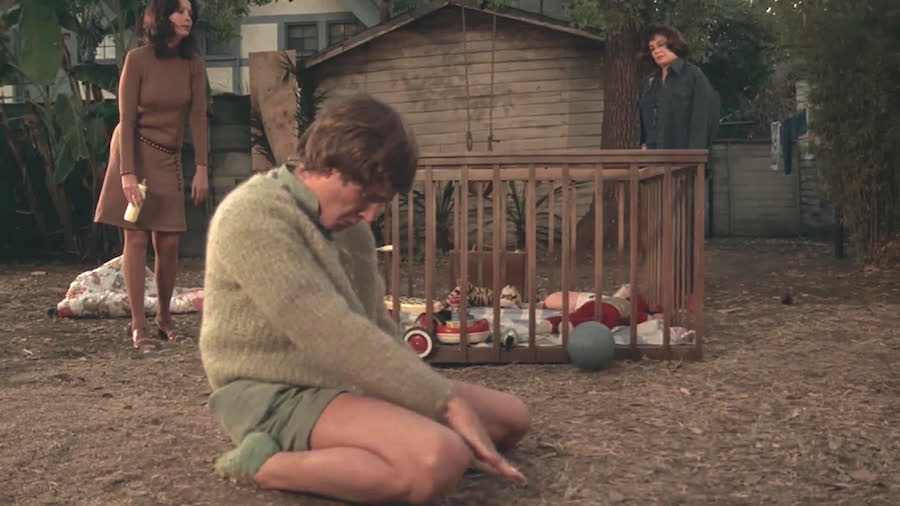 Ann Gentry is a social worker who takes a personal interest in the case of ‘Baby’ Wadsworth, an adult man with the apparent mental age and physical capabilities of an infant. Baby lives with his mother and 2 sisters, Germaine & Alba, who dress him in baby clothes, spoon-feed him, scold him and do everything they can to maintain his infancy. Mrs Wadsworth is a domineering matriarch whose children were all fathered by different men who subsequently disappeared. The ‘sisters’ are a freaky pair too; Alba takes great pleasure in disciplining Baby with an electric cattle prod and brunette Germaine thinks nothing of stripping off and crawling into the crib beside the boy for some late-night brotherly loving. When the 3 arrive home late to find their babysitter with her tit in Baby’s mouth they beat the girl bloody and Ma administers a hearty whipping with her belt. 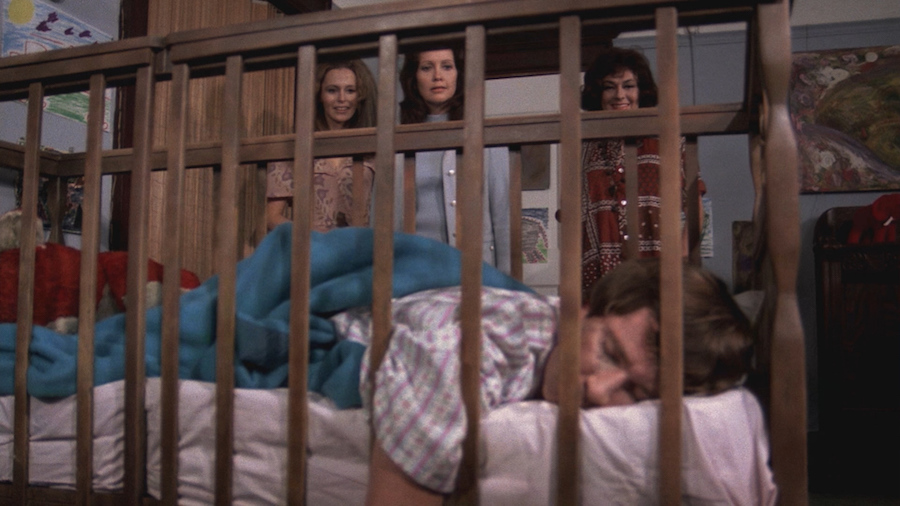 A previous social worker assigned to the case disappeared under unusual circumstances but Ann seems determined to save Baby from the abuse that has retarded his development. However Ann’s own emotional stability is questionable as she is grieving the loss of her husband Roger in a recent accident and her attachment to Baby appears to go beyond the professional. When she suggests that Baby attend a medical assessment to determine if there are any underlying physiological causes for his condition the Wadsworth’s lodge a formal complaint against her which results in Ann being taken off their case. But Ann is not giving up on Baby without a fight. 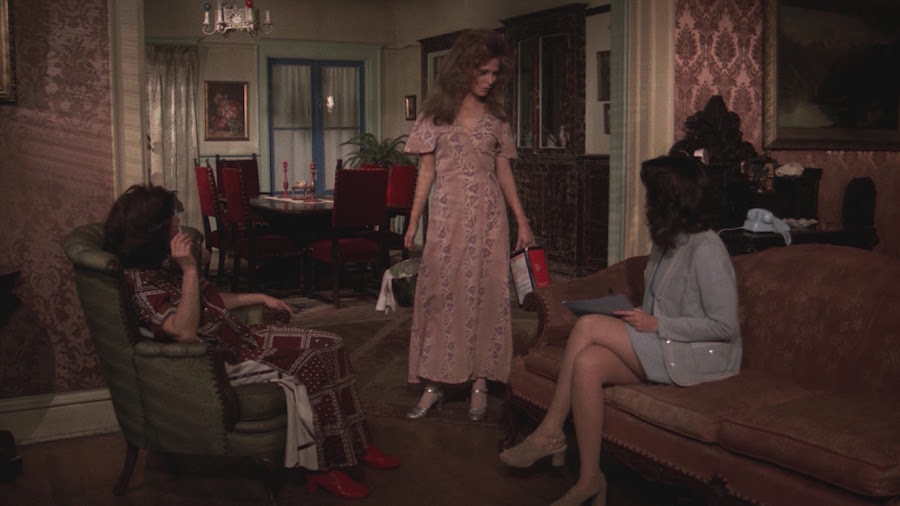 A deconstruction of male castration anxiety and the concept of the ‘monstrous feminine’? A parody of the extremes of maternal desire? A chauvinist satire of feminist empowerment? There’s some major academic mileage to be made from ‘The Baby’s wonderfully warped gender politics if you are so inclined however if you’re simply in search of some seriously screwed-up and sleazy entertainment then there’s no shortage of jaw-dropping thrills on offer. 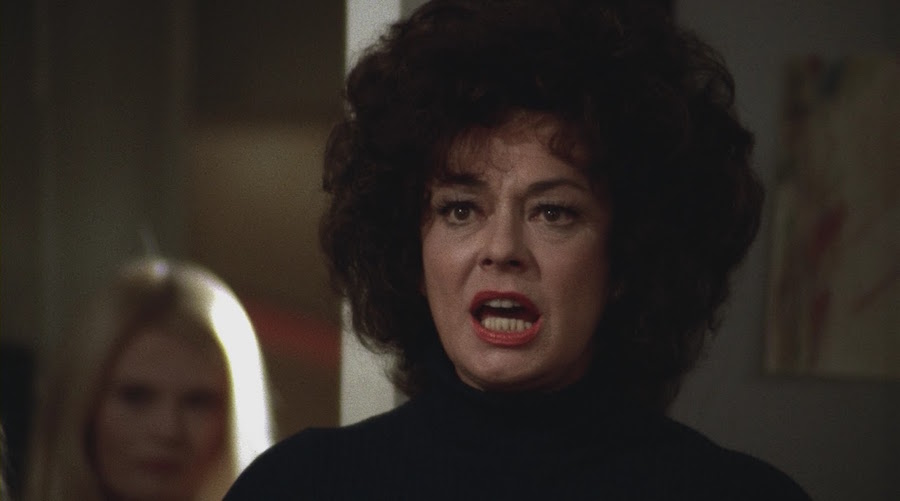 Ted Post directed episodes of many popular TV series such as Columbo and The Twilight Zone, as well as the Clint Eastwood vehicles ‘Hang ‘Em High’ and ‘Magnum Force’, but none of his other career credits hint at the unadulterated perversity, and potential offensiveness, of ‘The Baby’. The unpalatable aspects of the story are made to appear even more gruesome by the TV ‘movie of the week’ style in which the film is shot. It could be said that the pedestrian style, tear-jerker dialogue and considerable overuse of the zoom lens are shortcomings however I find that they work in the film’s favour as they provide a tabloid day-time soap opera context in which the physical and mental abuse of Baby appears even more shocking and sordid. 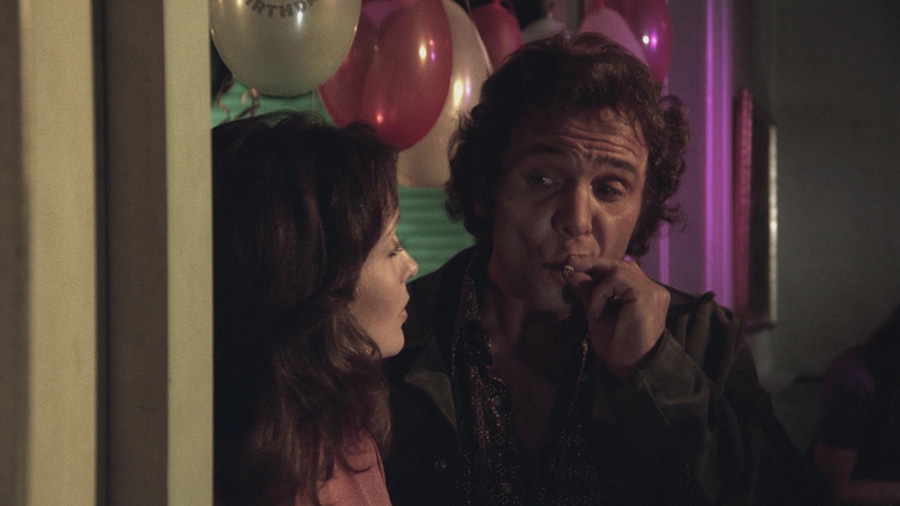 All the lead actresses give excellent performances attacking their roles with relish especially Ruth Roman as the menacing matriarch whose complete control over her son represents her revenge against all the men who ever did her wrong. David Manzy (aka David Mooney) too deserves special praise for his performance as the title toddler as he’s never less than 100% committed to the role. His ill co-ordinated mannerisms and facial contortions, although often hilarious, are completely convincing and the eye-rolling look of infantile pleasure that crosses his face when the babysitter is changing his diaper and powdering his ass is one of the film’s most amusing (and yucky) moments. 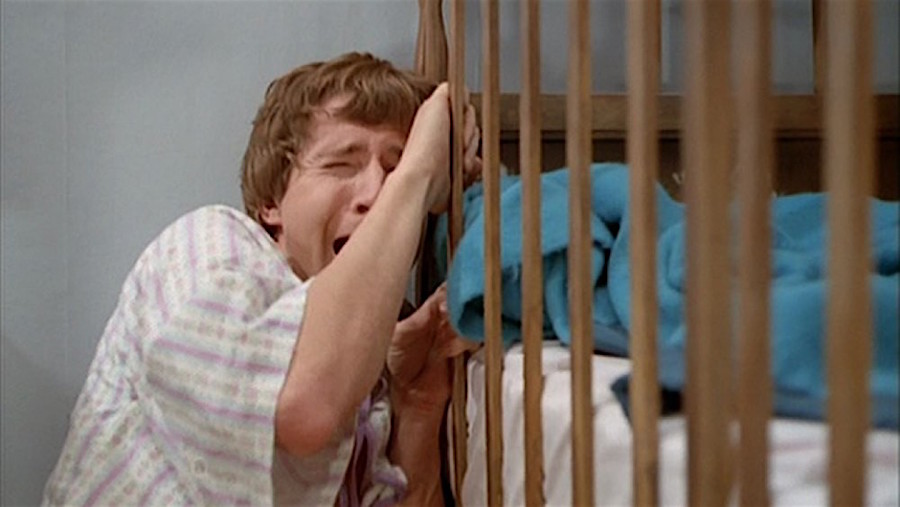 Creepy, sleazy, unpredictable and just plain wrong ‘The Baby’ is an absolute must-see for all grindhouse movie lovers however those viewers not entertained by the psychological, physical and sexual abuse of the mentally disabled might wanna take the night off. The blood-spattered climax is a real shocker and if you’ve not seen the film before I would urge you to skip any reviews which contain spoilers to get maximum bang for your buck. 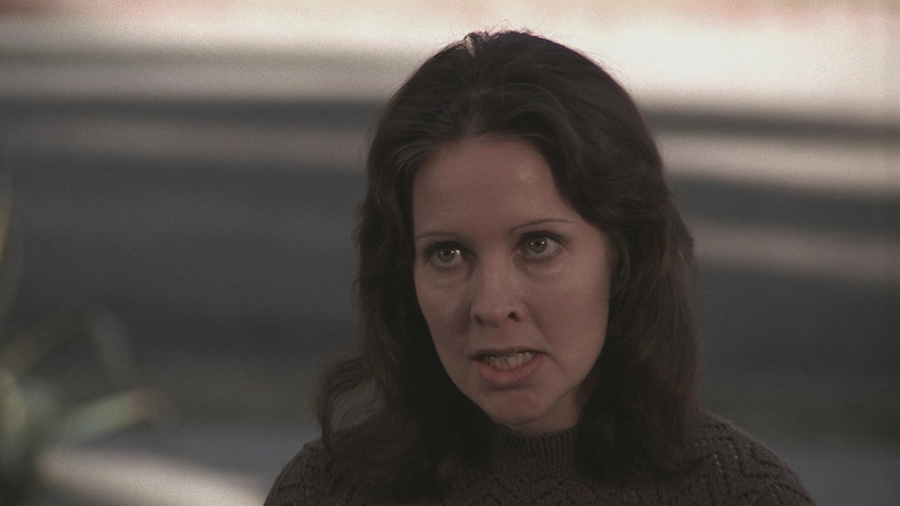 One last thought: whenever the camera lingers on Baby’s confused, grinning but eager to please face I challenge any viewer not to notice the startling resemblance to ex US President George W. Bush. I wouldn’t dream of suggesting that Bush Jnr suffers from retarded development of any description but the resemblance is undeniably uncanny.