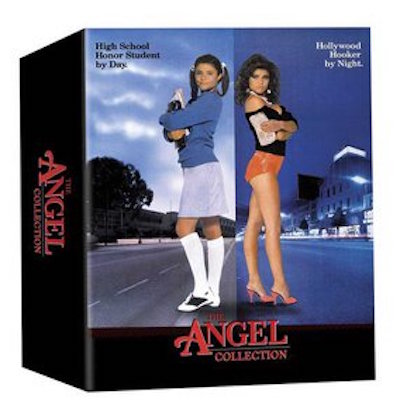 Angel (1984): Synopsis: 15 year-old Molly is the best in her class in high school. Nobody suspects that the model pupil earns her money at night: as prostitute "Angel" on Sunset Blvd. The well-organized separation of her two lives is shattered when two of her friends are slain by a necrophile serial killer. She's the only eye witness and becomes a target herself. The investigating Detective Andrews helps her, not only to survive, but also to query why she keeps on humiliating herself and to stop it. Directed by Robert Vincent O'Neil, and starring Cliff Gorman, Susan Tyrrell, Dick Shawn, Rory Calhoun, and John Diehl. NEW RESTORATION.

Avenging Angel (1985): Synopsis: When Molly, former teen prostitute, learns that Lieutenant Andrews, the cop who got her off the streets, has been gunned down, she leaves her new life as an aspiring and ambitious law student to return to the neon glow and deserted back alleys of Hollywood as "Angel" to avenge his death. Directed by Robert Vincent O'Neil, and starring Betsy Russell, Rory Calhoun, Susan Tyrrell, Ossie Davis, and Robert F. Lyon. NEW RESTORATION.

Angel III: The Final Chapter (1988): Synopsis: Angel returns to the street in an effort to find her missing sister. And while undercover, she discovers that her sister is about to be sold into a white slavery ring run by a powerful madame. The clock is ticking as Angel must break up the slavery network before it's too late! Directed by Tom DeSimone, and starring Mitzi Kapture, Mark Blankfield, Maud Adams, Kin Shriner, and S.A. Griffin. NEW RESTORATION.