Detective Barlan has his work cut out for him. It seems that his nephew Arthur (Juan Fernandez) has been accused of killing a young woman he had been seeing and all signs point to him being the only possible suspect. Arthur's mother doesnít think that he is the killer, though, so Barlan asks to be put on the case so he can see if he can clear the boyís name. Going from woman to woman in Arthur's life, the detective hears stories about how the supposedly sweet Arthur became a horrible sex fiend and attacked just about every woman he came into contact with during the span of a week or so. Unable to figure out what it is that could have set off such a well liked boy as Arthur, Barlan tracks down the youth's doctor, who tells him a fantastical story of a penis transplant that he gave to Arthur which could be the key to solving the case once and for all.

Epic sleaze-mistress Doris Wishman (purveyor of such turgid potboilers as Nude on The Moon, Bad Girls Go to Hell, and Another Day, Another Man), she of the inanimate object obsession, is back once again with one of her paeans to male sexual misanthropy. Instead of masking it in supposed male fantasies such as brutal dominance or planets filled with willing female sex slaves, though, Wishman goes right for the root of the issue in The Amazing Transplant by focusing on the male member itself. Her plot, itself slightly lifted from the oft filmed Hands of Orloc, plants the ridiculous notion that a man's sexuality resides solely in the penis and that the libido (and murderous tendencies) can be transferred from person to person by the grafting of said object onto another's body. Suspension of disbelief is the least of her worries, though, as this film produces some of the more unintentionally laughable moments of her entire career. 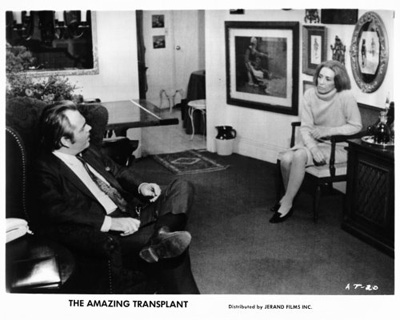 Anyone who has ever seen a Wishman film instantly knows what to expect from her camera work. All of her films are shot without sound and then atrociously dubbed in the studio, so her camera seems to unconsciously avoid her subjects as if it is a particularly shy party-goer who is purposely trying to avoid eye contact with everyone in the room. This allows her to focus on such uninteresting items as table lamps, shuffling feet, or the complete opposite person from whomever is talking. There are moments in the film where I thought that certain characters actually didn't exist EXCEPT as voices because Wishman takes so long to reveal them that it seems like she avoided showing them just to save money on having to pay actors for screen time.

It may be a good thing that we donít get to see a lot of the actors actually voice their lines, because Wishman's script is so ham-handed that it makes even the most overly-dramatic soap opera sound like Shakespeare. If I actually had to watch an actor struggle through the lines in this film, I donít think I would have been able to sit all the way through it, due to the intense embarrassment I would be feeling for them. While Wishman's dialogue isnít quite as bad as that of Ed Wood's work, I wouldn't be surprised to learn that she took a few writing courses from him before she got into filmmaking.

Despite the poor camera work and scripting, the film does offer up some decent nudity. Wishman was one of the few people I knew who could make the nude female figure seem completely unerotic (see: Nude on the Moon), but here she seems to get back on track enough to make the film worth recommending for the exposed skin alone. Unfortunately, several of the scenes are punctuated by moments of violence perpetrated by Arthur, so their sexual impact is greatly lessened thanks to these disturbing rape images that seemed to prevail in the seventies. The fact that a few of the girls even succumb to the forced sex and seem to enjoy it make the moments even more disturbing.