In the spectrum of exploitation films, ones made as exploitation and ones marketed as exploitation, The Alley Cats pretty much falls into the latter category. Although marketing focussed on its sex content and its lesbian sequence, the film is a, by Radley Metzger standards anyway, rather mild soft-core outing. There were alternate nude shots for certain sequences that were shot where the actress undressing faced the camera rather than away from it (these are thankfully included in the US DVD release's special features), but much more is implied than is shown. This, however, probably had more to do with the time it was made than anything. 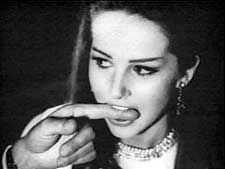 That said, the film does have an awful lot of sex. Whilst it mostly consists of close-ups of actor's and actresses' faces or their backs, the whole film is essentially one long sex scene. At any point in the film, there's pretty much at least one couple having sex. This does seem like a strange departure for a director who slowly builds up the major sex scenes in his films with innuendo and suggestive exchanges. But it still does feel very much like a Radley Metzger film. Along with unfaithfulness, there is the aforementioned lesbian sequence and an implied S & M sequence. There are the usual devices Metzger employs in his films; dialogue with double meanings (the second meaning obviously sexual) and situations that just scream sex if your mind is so inclined (and when watching Metzger, it usually is).

It all adds up to an enjoyable experience. The music is well chosen and the girls are all cute - especially the lovely Sabrina Koch. It's one of those films that manages to stave off disappointment by offering a film that is good for entirely different reasons than why you initially watched it. It claims to be a sexploitation film, but whilst there is plenty of sex in it, it doesn't seem about that at all. But on the other hand, it's a lovingly made film with great characterizations and set pieces. Besides, Metzger's films have all been a little more than simply sexploitation and, in a way, they are all falsely advertised. So I guess, The Alley Cats, is really no exception to his oeuvre.